February 2023
Vol. 22, No. 5
Gimme a Head with Hair! The Beatles, Ed Sullivan, and 50 Years of Music and Hair by Paul HormickJanuary 2015
San Diego Is (Almost) Famous Again: Cameron Crowe Brings his Movie to the Old Globe Stage by Raul SandelinJanuary 2015
The End of the Line for Mad, the Magazine That Was Satirical, Silly, and Serious by Paul HomiczJanuary 2015
THE HOSPICE BUBBLE and Other Devastating Affirmations: Poems by Lizzie Wann by Ted BurkeJanuary 2015
You’ll Get Pie in the Sky When You Die by Yale StromJanuary 2015
LENNY BRUCE: Word Blower Supremo (and the brother that you never had) by Jon KanisJanuary 2015
Art on 30th: Creating and Marketing Art You want to Live With by Lorraine IversonJanuary 2015
To Candye–Love, Sue by Sue PalmerJanuary 2015
Nicki Carano: A Tragic End for a Beloved Friend by Liz AbbottJanuary 2015
Movies About Musicians: Real and Imagined by Ted BurkeJanuary 2015
Advertisements 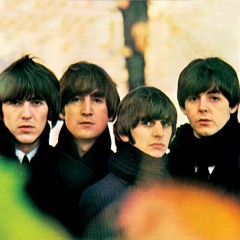 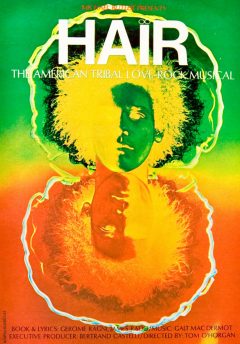 Poster of the rock musical, Hair 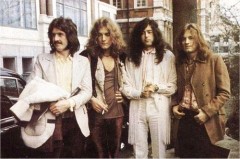 There’s no question that the Fab Four won the hearts of America’s teenage girls and became the band that everybody loves to love. They also reinvigorated rock ‘n’ roll music and, along the way, revolutionized what came out of our radios and stereos. But whether they meant to or not they also revolutionized hair. Before February of 1964, men’s and boys’ hair was short, short, short. After John, Paul, George, and Ringo appeared on The Ed Sullivan Show, hair, particularly men’s hair went in all sorts of different directions.

In a February 8, 1964 story titled “The Beatles Invade, Complete with Long Hair and Screaming Fans” by Paul Garder, noted that their long hair was their best-known trademark. “Four Rock ‘n’ Roll Performers Hailed by Teen-Agers” back when that designation of adolescence was still hyphenated by the American press.

Teenage girls wanted the Beatles, and teenage boys wanted to be like the Beatles. Within days of that Ed Sullivan appearance boys and young men who had been combing their hair back, to resemble James Dean, were combing their hair in bangs, to resemble the locks of the Fab Four. The every two-week trip to the barber’s was forgone, with hairlines creeping over ears and over shirt collars.

Needless to say parents and schools were not happy. By the fall of 1965 schools were putting in place rules for boys’ hairstyles and letting their student body know that there would be consequences for noncompliance. The New York Times ran a story in September of 1965 with the headline, “Beatle-Topped Boys Facing Planned Resistance Today, With Barbers the Winners.” In some cases principals and headmasters took scissors in hand and personally shortened the locks of male students. In other cases boys with long hair were suspended from class outright. One headmaster proclaimed, “A sloppy head is indicative of a sloppy mind.”

Often, these disputes reached the courts. In one case a teenage boy said that he needed his hair to be long because he played bass in a rock ‘n’ roll band. Communities and individuals involved themselves in interesting ways. During one court case, which concerned several students at a high school, an advertising billboard in the town proclaimed, “Beautify America; Get a Haircut.”

Back to the beginning, where did all that long hair come from? What had prompted the Beatles to choose those semi-outlandish hairstyles in the first place? George Harrison has been quoted as saying that as he had climbed out of the swimming pool one day his hair fell forward, and he decided to just leave it like that.

A story that some say has a little more backing, is that while they were performing in Hamburg, a few years before extreme fame would find them, the Beatles befriended Astrid Kirchherr. Kirchherr and Stu Sutcliffe, the bassist for the Beatles at the time, fell in love. One day, inspired by a character in Jean Cocteau’s film Orpheus, Kirchherr gave Sutcliffe a haircut. Washing the grease out of his locks, she combed his hair down over his forehead. Kirchherr recalled later that she had originally tried out this cut on her boyfriend, Klaus Voorman, to cover up his awkward-
looking ears.

The story goes that when Sutcliff showed up for the gig that night with his beta version of a Beatle haircut, McCartney and Lennon made fun of the bassist with his new hairdo. George Harrison was then the next member of the band to take on the new look, (Tragically, Sutcliff, the first Beatle to go Beatle, died soon afterward.), with Lennon and McCartney following. There is probably a fair amount of truth to this story, but I’m almost certain that it leaves out a great deal of the story of managers and others developing the look of the band.

Within two or three years long hair came to be associated with youth and rebellion. What came to be known as the counterculture embraced long hair. The country became divided over the war in Vietnam, and the length of your hair could very well tell others which side you were on. And then, suddenly, there were these people called hippies. They came from San Francisco, but the next thing you knew they were everywhere.

In 1959 Miriam Makeba moved to the United States from her native South Africa. The singer allowed her hair to grow in a more natural fashion, as opposed to the stylized hair fashions of other black women, which were basically variations of the hair fashions of white women. Her natural look caught on, and by 1966 she was credited with developing the Afro hairstyle. Makeba told Judy Kemestrud of the New York Times, “It’s as though Negro women are finally admitting that they are proud of their heritage.”

With young white kids growing their hair long and dropping the fashions of their parents and elders, the Afro became a similar badge for young blacks. Young black men and women, and black boys and girls were allowing their hair to grow in full round crowns. There was, of course, similar resistance from elders and the establishment. Schools banned Afros. A Marine was even jailed for three months, fined $180, and demoted in rank for refusing to cut his hair and do away with his Afro.

The apotheosis of youth and rock and long hair culminated in the Broadway musical Hair. Yes, before there were the rock operas of Tommy and Jesus Christ Superstar there was the rock musical and Hair is pretty much the alpha and omega of the genre. Described by Clive Barnes of the New York Times as less of a story and more of “a mood picture of a generation,” he noted that the audiences for the show were largely composed of middle-aged theater goers.

Certainly not Rogers and Hammerstein, critics gave Hair good to glowing reviews and used words like “tough” and “lusty” to describe the music of Galt MacDermot and lyrics of Jerome Ragni and James Rado. The music of Hair loosely unfolds around a group of long hairs living in New York City who are trying to balance their bohemian lives, sexual liberation, and opposition to the war in Vietnam with their conservative parents and society. Hair gave us “The Age of Aquarius,” “Good Morning Starshine,” and Meatloaf, who was in the Los Angeles production of the musical.

In the seventies everybody’s hair got at least a little longer. But it continued to be a big deal in the rock ‘n’ roll world. I came of age in the seventies and can personally attest to this strong connection. Somewhere along my junior year in high school I got a call from an old friend inviting me to play with his rock band. I went over that next week with my bass and amp and jammed away for a couple hours.

After our jam session, I packed up my amp and bass and went home, expecting to hear about the next rehearsal. Days and weeks went by with no phone call. Finally around six months later my friend called, said I was in the band, and invited me to the next rehearsal. I played with the band for a year before the drummer confessed to me that, of all guys to audition, everyone in the band agreed that I was the best bass player. But the guitar player had vetoed my joining the band because my hair had not been long enough. (Though I was a rock ‘n’ roll bass player, I was a good boy in a Christian high school, with a haircut that complied to the dress code at the time: with the length of my hair no much over my ears and not much over my collar.)

And though everybody had hair that was longer, with even President Carter sporting hair over his ears, real long hair could still cause fighting among the young and the old. I went to school with a fellow named Sam Wash; he recalls, “I was at West Virginia University in the mid-seventies when I grew my Afro out. A lot of my fraternity brothers had long hair influenced by music for sure. I was the only guy in the house with an Afro and they encouraged me to grow it as big as possible. Thankfully, my father never saw me like this because I was away at school. In high school he saw me with a considerably shorter version of this and I still remember the confrontation when he told me to ‘get that shit off your head!’”

James Hood Guitar: repairs, restorations, and excellence under one Roof