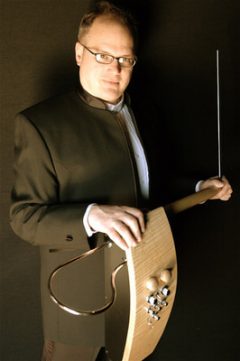 Scott Paulson and his Theremin.

My performances for the very macabre month of October tend to celebrate horror, fantasy, and sci-fi. And whether the venue is live radio drama, a silent film screening, or a steampunk convention, I always bring my Theremin along! It relays the otherworldly, easily. But keep in mind that it can take years to play standard literature, or even a simple scale, in tune.

Those of us who love the Theremin often forget that not everyone is a kindred spirit. And if it gives your family members a headache, Theremin players might want to consider  a set of headphones or a pair of earbuds for secret, silent practice sessions.

The Theremin is one of the first electronic musical instruments. Soviet inventor Leon Theremin created it (according to some accounts, by accident) around 1918. Leon happened to have two pieces of radio signal equipment in his lab that sang out to him whenever he passed between them. It turns out that Professor Theremin’s body was acting as a capacitor when walking through, and a very special signal frequency was created in this mix, and, thus, haunting heterodyning was heard!

The instrument has had far less than a handful of virtuosi, and all agree that Clara Rockmore was the supreme. Here she is, performing The Swan by Saint-Saens.

Bob Moog re-introduced the Theremin to the general public in the late 1950s and 1960s through his Theremin-making kit. Dr. Moog is perhaps better known as the inventor the first commercial synthesizer. If you ever want to honor Bob’s electronic-music pioneer role by playing on one of his Moog company Theremins, go to the Museum of Making Music in Carlsbad, as they have a demo model on display. In addition, the Guitar Center often has a Moog Theremini as a hands-on display item. The Theremini has helpful filters that lead your performance into a wonder of wanderings!

The distinctive OOOoooEEEeeeOOOOooo sound of the Theremin is an attention grabber…many of us heard it first in the 1953 film The Day the Earth Stood Still, with Samuel Hoffman being the performer for that score. Throughout the 1970s, comedian Robert Klein gave onomatopoetic tributes to the Theremin in his stand-up act (never playing on a real Theremin, but briefly imitating one to underscore a horrific punchline).

People who love the Theremin sometimes give undue performance credits to the instrument. Hearing possible portamento, Theremin offerings in the ether of radio, films, and television is a rite of passage for fans…but it’s time to gently acknowledge who really played what! The haunting theme in the 1966-1971 ABC Network vampire television soap opera Dark Shadows was not played by a Theremin, but by a Tannerin, an instrument that Paul Tanner invented as an easier and more reliable substitute for our beloved but temperamental Theremin. (Shout out to the late great Paul Tanner who lived a long and happy retirement in Carlsbad!) 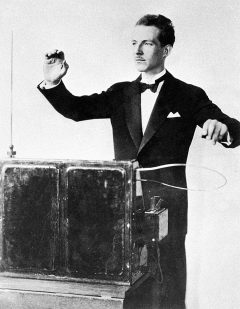 Studio soprano Loulie Jean Norman sang, as an uncredited vocalise, the original Star Trek television theme in 1966 and 1967, however there was never a Theremin there, ladies and gentlemen. I swore there was, but nope. The 1968 season theme was re-recorded without her to avoid royalty payments.

The 1956 sci-fi film classic Forbidden Planet did not feature a Theremin. Ring modulators and meticulously edited electronic tapes created the genius musique concrete score. Married composing-couple Bebe and Louis Barron should have gotten the Oscar for film score that year, but a Musician’s Union dispute (Mr. and Mrs. Barron were not members) disqualified the couple for consideration (the dispute even affected their actual music film credit, downgrading it to “electronic tonalities.”)

And, don’t forget that the 1966 Beach Boys single “Good Vibrations” used a Tannerin in the studio (played by Paul Tanner himself!)

In these COVID times, the Theremin can be celebrated, oddly, as the perfect pandemic musical instrument: one doesn’t touch it or breath into it. You simply wave your hands around in the air, near two antennae, to create an audible signal. Your left hand (near a horizontal antenna) controls volume and the right hand (near the vertical antenna) controls pitch. Interestingly, it has always been recommended that the instrument and performer have no items or visitors within six feet (although this is for intonation concerns, not viral health matters).

P.S. Coming in October to La Jolla Playhouse’s digital WithOut Walls Festival, Listen with the Lights Off: A Radio Horror Show brings you a triptych of frightening, October-appropriate radio plays in collaboration with San Diego-based literary and performing arts nonprofit organization So Say We All.

Intelligent, original, and unsettling, this new take on the radio drama features stories from diverse writers, actors, and directors who will have you on the edge of your seat. I will be playing some Moog Theremins and Moog synths. Twisted up in paranoia, body issues, magical realism, ghosts, monsters, sibling rivalry, and even earth death, Listen with the Lights Off takes you to wholly unexpected worlds—sometimes funny, sometimes disturbing, but always memorable… and eerily plausible.

These fictional short plays, adapted from So Say We All’s literary horror anthologies Black Candies, will be brought to hyper reality in a full-scale production to make sure Halloween thrives even during quarantine.

Mark your calendars now for the premiere date Thursday, October 15th. We’ll also feature special behind-the-scenes content and accompanying media to enhance the experience. So, get ready, because Listen With The Lights Off: A Radio Horrorshow will take your October to new depths of delightful darkness.

Scott Paulson is the University Carillonneur at UC San Diego (playing live and taking song requests for Geisel Library’s rooftop chimes!) He is also the Silent Film Curator at the La Jolla Historical Society and the Exhibits and Events Coordinator at the UCSD Library. In addition, Mr. Paulson is the host of Ether Tale Radio Theatre at WsRadio.com, which happens twice monthly.