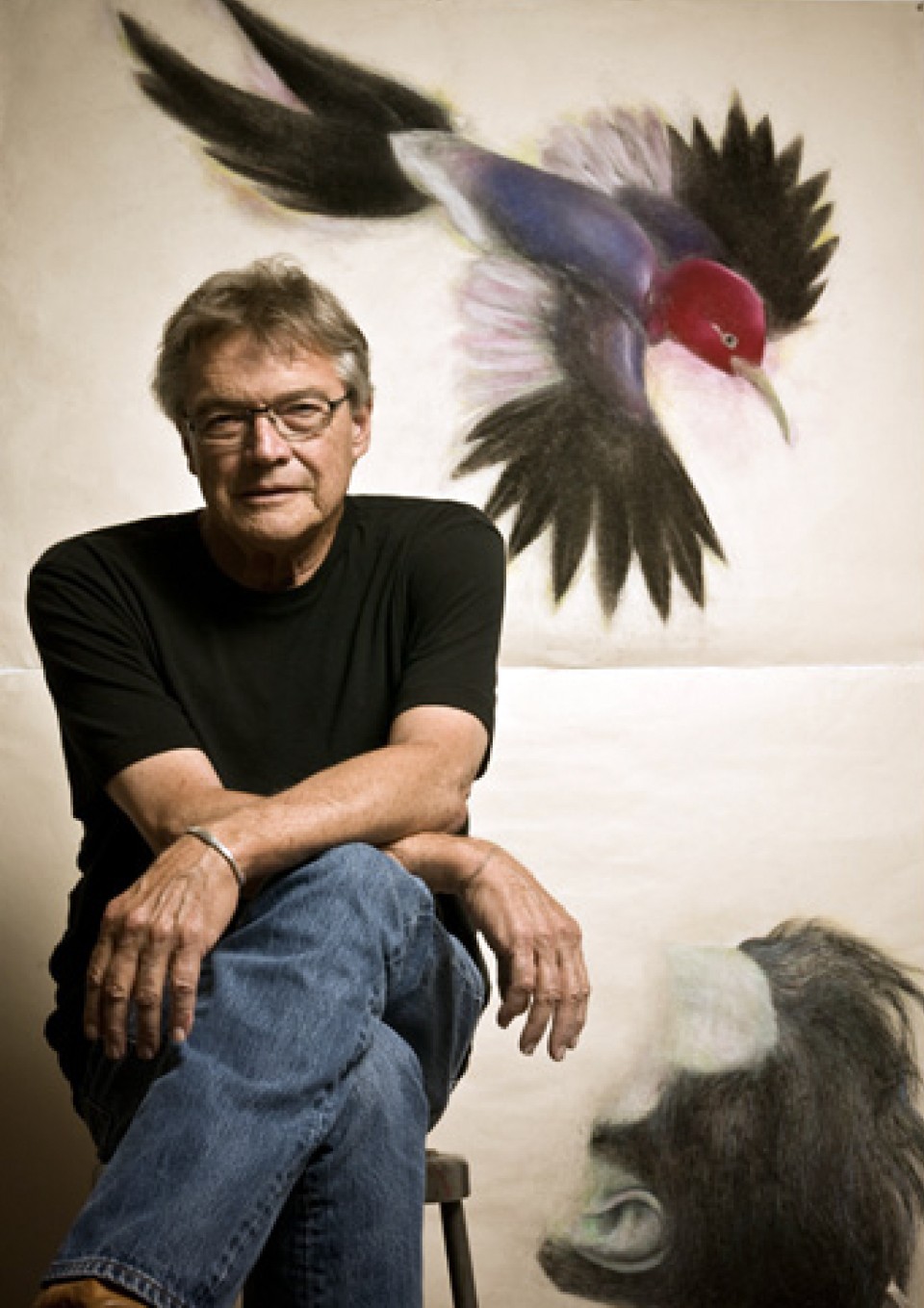 Terry Allen has a varied artistic career across many disciplines. Readers of the Troubadour certainly know of Terry Allen as the lead vocalist of his very own Panhandle Mystery Band, but the fine art world knows Allen best for his paintings and drawings. With his 1986 Stuart Collection outdoor sculpture project, Allen took advantage of his talents and connections as a songwriter and composer.

Terry rescued three campus Eucalyptus trees that had been earmarked for removal because of University expansion. The trees were excavated and set aside for a second life. The trees were lovingly cured, wired for sound, and encased in lead for an alchemical transformation into story-telling/music-broadcasting mascots of the University of California, San Diego. Two of the trees are partially hidden in a grove of living trees adjacent to Geisel Library and perform effusively for passersby. The third tree stands proudly, directly in front of the library, staying respectfully silent!

The ever-growing Stuart Collection sculpture garden is scattered across the La Jolla campus of UC San Diego, but Terry Allen’s “Trees” stand at the heart of the campus and are the most musically enchanting items of the (more than 20) sculptural wonders yet.

Below are three short paragraphs from the Stuart Collection staff relaying important information about the collaborative nature of Terry Allen’s project. 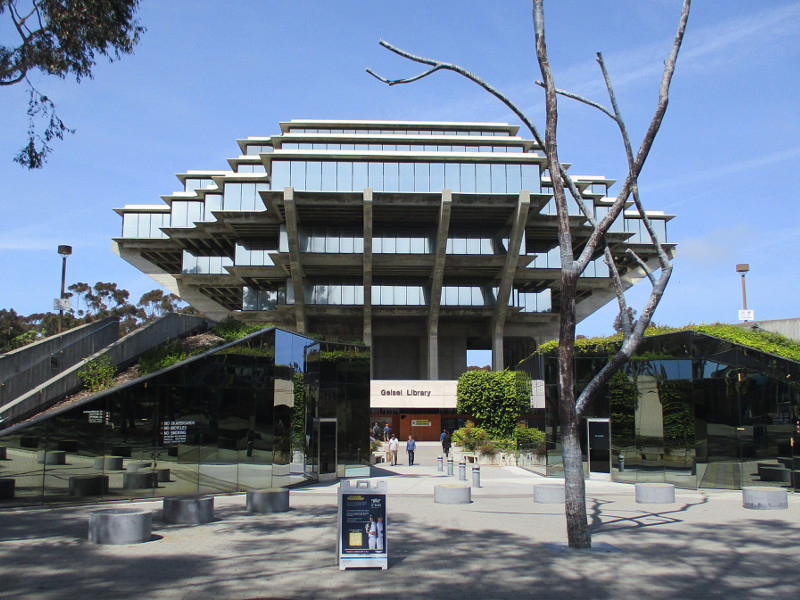 One of the singing trees in front of the Geisel Library, UCSD.

Two of these trees, preserved and encased in skins of lead, stand like ghosts within a eucalyptus grove between the Geisel Library and the Faculty Club. Although they ostensibly represent displacement or loss, these trees offer a kind of compensation: one emits a series of recorded songs and the other a lively sequence of poems and stories created and arranged specifically for this project.

For the music tree, William T. Wiley, known for his paintings filled with literary puns and eccentric maps, sings “Ghost Riders in the Sky,” accompanying himself on a homemade instrument; West Texas singer Joe Ely sings “Mona Lisa Squeeze My Guitar,” while the Maines Brothers work pedal steel guitars, a Thai band plays, and filmmaker/musician David Byrne sings a song he composed especially for this project. For the literary tree, Bale Allen delivers his poem about scabs and poet Philip Levine recites. There are also Navajo chants, translations of Aztec poems, duck calls, and many other sound works. Trees is a continuous project and Allen and others are at work on future contributions. 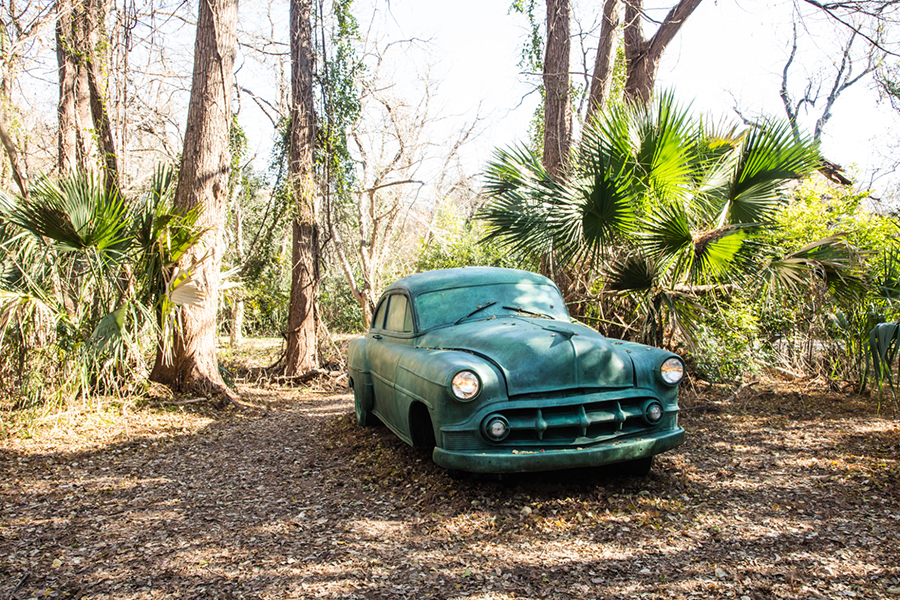 Another installment by Terry Allen in Austin, Texas: Road Angel.

Since completing Trees, Allen has done numerous public works, among them: Corporate Head at Citi-Corps Plaza in Los Angeles; a large bronze leaf—Belief—for the Vontz Center for Molecular Research in Cincinnati; a giant bronze wishbone—Wish—for DFW airport; Scioto Lounge—three humanized bronze deer on the banks of the Scioto River in Columbus, Ohio; and, most recently, Road Angel, a 1953 bronze Chevy with sound for Contemporary Austin/Laguna Gloria Museum in Austin, Texas. Allen has released 13 albums of original music, including the recently acclaimed Bottom of the World and a new suite of prints with the same title by Landfall Press. His classic albums, Juarez and Lubbock (on everything), have been re-issued. He was the first recipient of the Townes Van Zandt Songwriting Award and is 2017 recipient of the Stephen Bruton Award for songwriting at the Lone Star Music Festival in Ft. Worth.

Founded in 1981, the Stuart Collection’s goal is to spread commissioned sculpture throughout the campus, including both traditional sculptures and site-specific works, integrating with features of the campus such as landscaping and buildings. It is supported by the UCSD Department of Visual Arts, the National Endowment for the Arts, and many private organizations and individuals.

Tours of the Stuart Collection are also available!

The Kazoo: Not Just an Annoying Party Favor

Everything You Didn’t Know About Whistles!