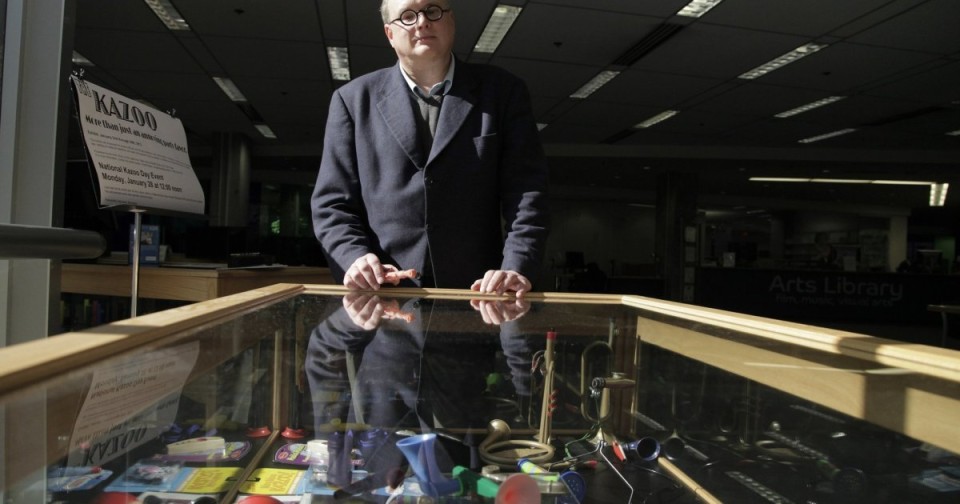 Scott Paulson and his Kazoo Exhibit at the Geisel Library, UCSD.

Our esteemed Troubadour editor, Liz Abbott, asked me to devote my current column to revisiting a past exhibition topic. I mounted the exhibit, with a festival of live performances, in January 2013, at UC San Diego’s serious research library, Geisel Library. A playful topic like the kazoo is not a first choice for an academic research library, but when the library is named after Dr. Seuss, all bets are off. And yes, Liz, the 10th anniversary of that exhibit is an appropriate year to re-visit with a column. This is also the right month to reminisce, as January 28th is National Kazoo Day! The date was often celebrated on the fourth Thursday of January, but in recent years the cabal of kazoo leaders have opted for the more stationary numerical date of January 28th (falling on a Saturday this year).

The kazoo may be best known as an annoying party favor, but, for that exhibit, research tools at the UCSD Library revealed some historical surprises and important uses. Speech therapists have had success using the kazoo as a rehabilitation tool for adults and as an ice breaker for young children who are perhaps too shy to engage in prescribed vocal exercise. Anthropologists and sociologists have found ancient kazoos thought to be used in solemn ceremonies in Africa and Mexico. Classical composers and pop musicians alike have snuck kazoos into their compositions and recordings, to great effect. 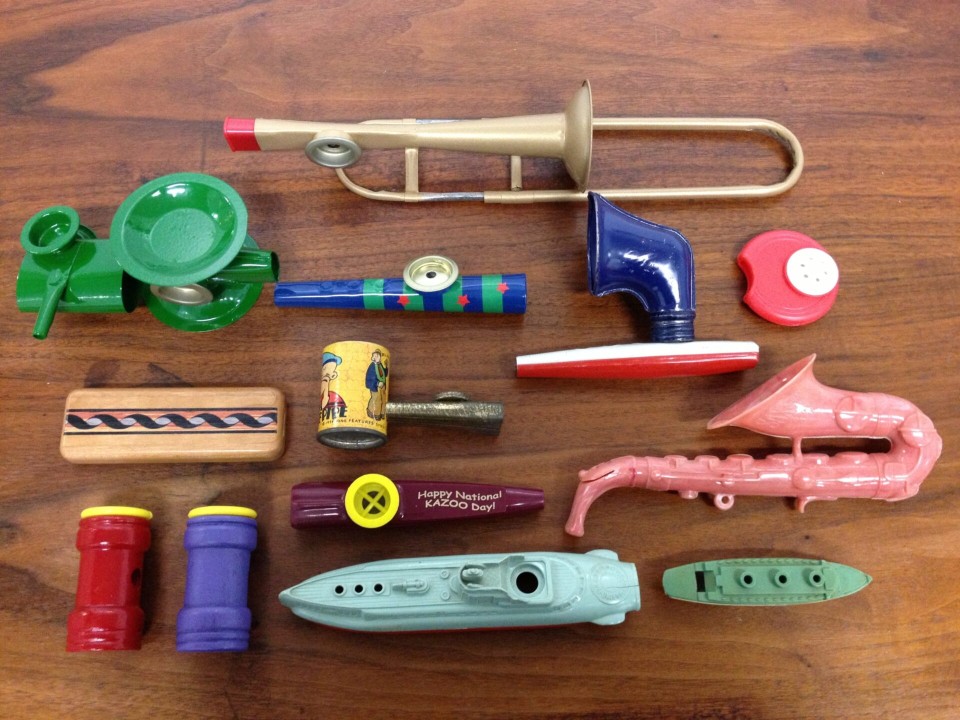 A variety of different kazoos.

At my exhibition, a decade ago, visitors sorted through some fascinating kazoo literature (scholarly articles and musical scores) and listened to some new chamber music for kazoo composed by alumni of UC San Diego. At the premiere, encore songs from The Cat in the Hat Songbook were performed, at the audience’s insistence. A collection of kazoos from many decades and many countries were on view, and there were free kazoos for all who dared visit. All this was underwritten by a private esteemed La Jolla donor, who suggested anonymity, but I can tell you now that her nickname was “Mrs. Judy” and she approved each and every item on display.

An expert user of library tools, Mrs. Judy even helped with some of the exhibition research. She appreciated that the exhibit was actually born from an actual student study guide exercise dare: find some serious information about the kazoo using online tools and other reference items.

The UCSD Library commissioned original kazoo music (some serious and experimental, some very light-hearted) and the exhibits revealed some surprising kazoo connections in classical music and world music. We also revisited some related anthropological research in our kazoo exhibitions. As mentioned, our “kazoo salute” was originally visited as a research exercise, challenging us to use serious library tools to investigate a light, playful topic—-and we ended up with a lot of praise for the exhibits and had several well-attended study-break events featuring live kazoo music….(our local Channel 8 CBS News affiliate came in the back door, unannounced, during one of our live kazoo events with a full video and sound crew and created an amazing segment). 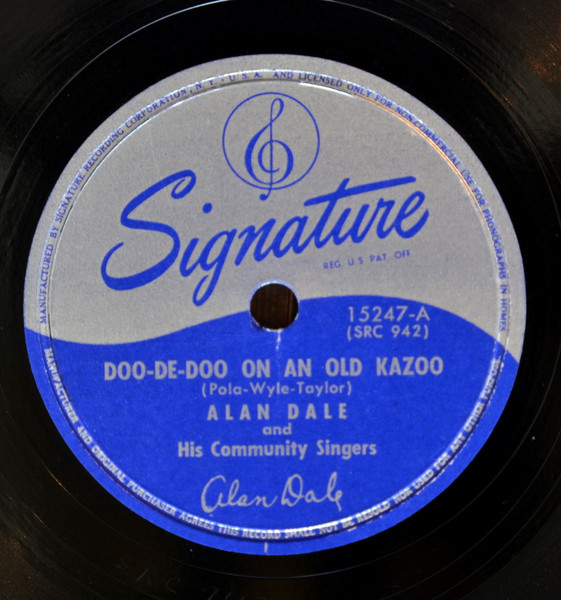 The kazoo has serious roots in African history, used in somber masked ceremonies. All wore elaborate facial masks, but only one was chosen to mask the voice, using a hollowed-out gourde or animal horn…and a small patch of spider egg silk acted as the resonator on a tone hole when the performer spoke or sang into it. That was the first kazoo.

Recent journal findings revealed ancient Mexico had some kazoo-like instruments of particular charm and interest (recorder-like flutes with slivers of corn husk draped near the tone holes to create a subtle, buzzing effect).

At the Georgia State Fair in the 1840s, an African-American man named Alabama Vest introduced his version of the kazoo in a special vendor booth. His kazoo was a huge hit and led to a business partnership and the first mass-production of kazoos in America. No official written records exist regarding Alabama Vest, but at our 2013 exhibit we gathered our favorite agrarian-themed kazoos to celebrate that fair and Mr. Vest. Believing in Mr. Vest is a choice worth making.

Though Geisel Library has not hosted a fully complete kazoo festival since 2013, we certainly have included the kazoo as an item in recent Toy Piano Festivals and very occasional group study breaks.

Pachelbel’s Canon in D, performed on kazoo by the Yorkshire Kazoo Orchestra! Fun!

Here are some of the kazoo label citations from that 2013 kazoo exhibit!
Paul McCartney played kazoo on the 1974 Ringo Starr single, “Sweet 16. 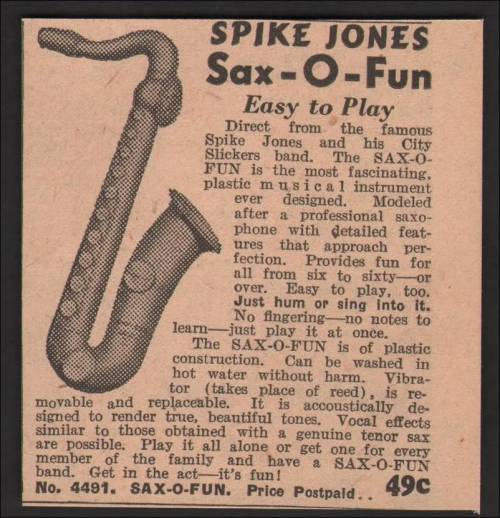 Spike Jones (1911-1965), legendary bandleader with a slapstick approach to his arrangements and performances, is represented here with this pink saxophone kazoo!

Wrestler themes on Kazoo Edge and Christian (WWF wrestlers who had a very “Beavis and Butthead” approach to life and work) captured the WWF tag team title seven times—with a secret weapon: they were able to drive foes to the very edge of madness with their kazoo antics. Here is a trading card/game card showing the kazoo in full view.

San Diego-based cowpunk band, the Beat Farmers, used a kazoo for backup in their song “Happy Boy” from their first album, Tales of the New West.

Jimi Hendrix had a performance incident with a bad paper-cone amplification system and liked the distortion. In his 1968 recording of “Cross Town Traffic,” Hendrix re-captured that buzzy sound by overdubbing with a comb-and-wax-paper kazoo.

Bob Burns (1890-1956) began his career in early1930s radio playing the bazooka, a kazoo-like instrument. Fans purchased a very popular kazoo version of his unusual trombone novelty toy of the era. 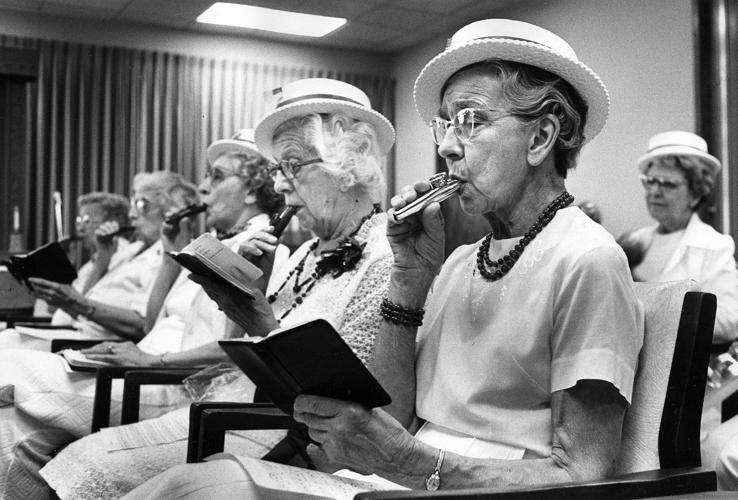 Barbara Stewart (1941-2011) had a successful kazoo career with recordings, effective educational music outreach, and even a Carnegie Hall recital!

The saxophone was invented by Adolphe Sax in 1841, the same decade that the kazoo became popular. Kazoos were made in the shape of saxophones for decades because the novelty of the instruments had a similar appeal. In early recordings, a good kazoo player could easily imitate a saxophone and create a debate: kazoo or saxophone?

Mark Bucci’s “Kazoo Concerto” was premiered at one of Leonard Bernstein’s Young Peoples’ Concerts with the New York Philharmonic in 1960.

Featured in the exhibit: a set of articles and research abstracts that mention the use of the kazoo as a tool in speech therapy. 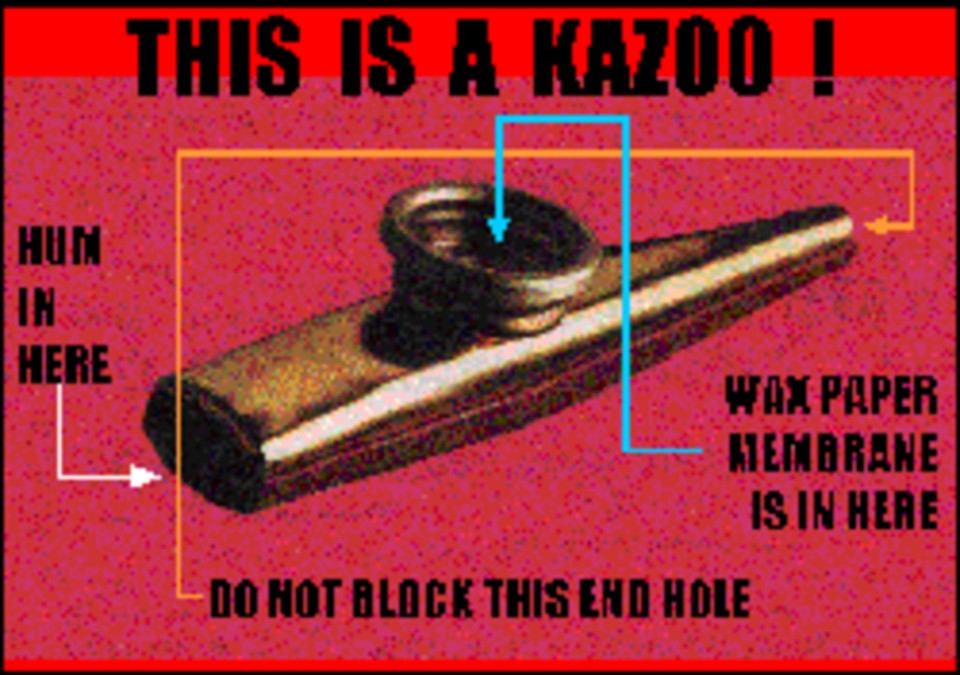 The kazoo is called for in Frank Loesser’s score for the 1961 Broadway musical comedy How to Succeed in Business Without Really Trying. Kazoos are heard as part of the instrumental accompaniment played by the orchestra, providing the sound effect of electric razors being used in the executive washroom, underscoring a dance reprise of the ballad “I Believe in You.”

The kazoo was used in the 1990 Koch International recording of composer Charles Ives’ “Yale-Princeton Football Game,” where the kazoo chorus represents the cheering in the football stands. The brief passages have the kazoo chorus sliding up and down the scale representing the rising and falling of the crowd’s cheers.

A respected orchestration of Arnold Schoenberg’s “Cabaret Songs” at one point calls for a “mirliton” to be used (mirliton is the official musicological descriptive term for a kazoo).

WE STILL GET CALLS FROM KAZOO FANS
We still receive follow-up calls from kazoo fans, hoping for a re-staging of our buzzy festival, and people often call because of past press clippings from local, national, and international sources, including this fun HuffPost article:

Words and Music: The Singing Trees at UCSD