Scott Paulson, one of our monthly columnists, invites San Diego Troubadour readers to the 20th Annual Toy Piano Festival, which is being held as a Facebook Live virtual event this year. Scott is the founder and director of this popular local festival, hosted on his home turf at the UC San Diego Library, where he is the events and exhibits coordinator.

A collection of toy pianos. 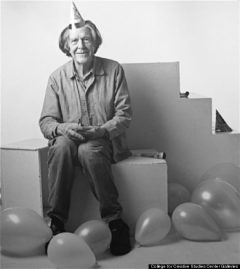 Paulson plays the toy piano at one of the festivals.

Registration is now open for the Festival, a free virtual event for listeners of all ages. Hear new works for toy piano at noon on September 30th! I will be joined by my toy piano colleagues, including Sue Palmer, Andrea Wingen, Kenneth Herman, Barbara Scheidker, Samara Rice, Christian Hertzog, Peter Flynn, Alex Segal, Gail Gipson, Kiera Sullivan, Linda Kernohan, Philippe Robles-Fradet, and Daria Binkowski. Many of the premieres at this year’s festival will take a mere 20 measures or 50 seconds, as a tribute to the 20th anniversary of the Festival and the upcoming 50th anniversary of UCSD’s Geisel Library building. All of us wish we were gathering in person in the Seuss Room, but we’ll be happy to see you via Facebook Live this year!

I usually host the festival on September 5, which is composer John Cage’s birthday, because he was the first to write a serious piece for toy piano. The UC San Diego Library and its very supportive colleagues at downtown San Diego’s central library  will send out a birthday greeting to the late great John Cage on that very birth date as a reminder to register for the upcoming Facebook Live version of the festival.

UCSD’s history with toy pianos dates back to 1966 when composer Robert Erickson, a founder of the university’s Music Department, wrote a piece for toy pianos and bells that premiered on California’s PBS television stations. As I mentioned, the first composer to write a “serious” work for toy piano was John Cage, who visited the UC San Diego campus on several occasions, including a two-week stay as a Regents Lecturer in the 1980s. I was very lucky to be on campus for Cage’s lectures, as was my colleague Peter Flynn, and we’ll both perform in a Cage tribute piece at this year’s festival.

What was the inspiration for the annual festival?
In 1999, a missing service bell at a Geisel Library Help Desk spawned a long streak of toy piano activity on the UCSD campus. I hurriedly replaced the missing service bell with a playful tiny keyboard and a sign that read: “Please play on toy piano for service.” And play they did! This surge of musical activity from visitors was the inspiration to host our Annual Toy Piano Festival.

In May 2001, the Library of Congress issued a subject heading and call number for toy piano scores because of the activities at Geisel Library. Scores can be viewed under the call number M 175 T69. This was an important opportunity, because before there was a distinct call number, all of our toy piano scores were mixed with and shelved with regular piano scores in library stacks, making it impossible for a quick “grab and go” for someone like me at Festival time. Note: The Library of Congress at first declined our request. They required that we submit a definition of “toy piano” to them to warrant the distinction. We submitted a definition but my side of this story is that I also threatened to fly out and perform live to prove a point. They quickly said yes to avoid a playful confrontation.

Hear new works for toy piano on the last day of September at noon!

1894
Mrs. W.E. Walsh arrives in San Diego with an 1873 Schoenhut Toy Piano among her possessions.

1933
Opera star Leontyne Price receives a toy piano from her parents and later relays this as the start of her Diva-dom: “I was center stage! And I caught the disease then.”

1967
First appearance of a toy piano in a Broadway pit orchestra: in You’re a Good Man, Charlie Brown, Schroeder plays a prop piano on stage, but a toy piano in the pit provides the sound!

1979
First appearance of a toy piano on a Broadway stage: In Act II of the Marvin Hamlisch musical, They’re Playing Our Song, a small red toy piano is delivered on stage as a get-well gift in the hospital scene.

1997
Pianist Margaret Leng Tan releases her CD, The Art of the Toy Piano.

2000
Len and Renée Trinca move the Schoenhut Toy Piano factory from Rochester to St. Augustine, Florida, where they live.

2001
The Library of Congress issues a special call number (M 175 .T69) and subject heading for toy piano scores (granted at the request of the Toy Piano Collection at Geisel Library!)