Dear San Diego Troubadour Readers:
I won’t be hosting a live and lively Annual Turkey Calling Show this year in the Seuss Room of Geisel Library, as UC San Diego is being appropriately cautious in this, our pandemic time of COVID 2020.

I will, however, feature a brief Turkey Calling tribute regarding the fest on Wednesday, November 25th at noon. It will be at least five minutes and less than 15.

Be the first to see it by scrolling down to the bottom of this site at noon on the day before Thanksgiving: https://library.ucsd.edu/news-events/events/turkey-2020/ 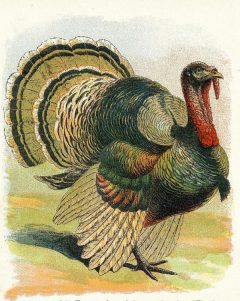 Our American turkey traveled across the pond to Europe in the 1500s, courtesy of early Spanish explorers. At first, the early turkeys abroad relaxed in ornamental gardens as roaming objects of interest. It was a lovely life. European artists featured turkeys in tapestries, frescoes, oil paintings, ceramic sculptures, etc. These birds were not on a platter nor in a pot. However, things changed when it was learned they were flavorful.

Perhaps in 2021, you’ll attend the Annual Turkey Calling show and view our proprietary slide show of the American turkey in European art. Please mark your newer calendar now, knowing the show is always held the day before Thanksgiving at noon.

In addition to visual arts appreciation of all things turkey, the fest features appropriate seasonal (is that a pun?) music each year.

An American Thanksgiving has to feature corn, a storied, indigenous crop of importance. And so composer Gershon Kingsley’s “Popcorn,” which is two-minutes and 30 seconds of explosive fun, is often featured at our annual show, played with guilty pleasure on my favorite Moog synth.

Composer Gershon Kingsley first recorded “Popcorn” for his 1969 album Music to Moog By. In 1971 the track was re-recorded by Kingsley’s band First Moog Quartet; later he released a version under the name of The Popcorn Makers.

In 1972, Stan Free, a fellow member of the First Moog Quartet, re-recorded “Popcorn” with his band Hot Butter and this version of “Popcorn” is the very one Americans heard on the radio non-stop. With some qualifications, the single apparently holds the distinction of being one of the first electronic-based pieces of music to hit American pop music charts.

“Hot Cross Buns” is also a necessary Turkey Festival tune, representing the controversial fall season arrival to our homes of the schoolchildren’s flute-whistle (cheap plastic recorder) for homework practice. An obligation quickly rises up, elevating the recorder-requisite “Hot Cross Buns” ditty to holiday tableside “entertainment.” This ancient and simple song and bun has fascinating pagan roots, with the dough-etched cross at first representing the four quarters of the moon, the four seasons or four elements (earth, air, fire and water) and, later, having elaborate Christian connotations.

“Turkey Lurkey Time,” a featured song-and-dance number from act one of Promises, Promises, a Burt Bacharach/Hal David/Neil Simon musical, was heard as part of an office Christmas party scene in the play, but, lo, it has become a staple for Thanksgiving listening.

Adam Sandler’s “The Thanksgiving Song” was first performed on Saturday Night Live on November 21, 1992. It eventually made it onto Sandler’s debut album and was released as a single. This predates his wildly successful “The Chanukah Song” and again relies on a lengthy and loving litany of lilting lists—so, yes, we often feature Sandler’s song often at our annual fest.

The French art song “Le Didon” has been performed to great acclaim in festivals past by classical vocalist Satomi Saito (with pianist Christian Hertzog!). They both still work at Geisel Library—let’s hope for a 2021 musical return.

Time permitting, I usually play an Appalachian fiddle classic on the oboe in the show. The woodwind substitution is a conceit to relay that oboists have chosen to start using turkey feathers, again, to remove moisture from the narrowest part of their fussy conical instrument. 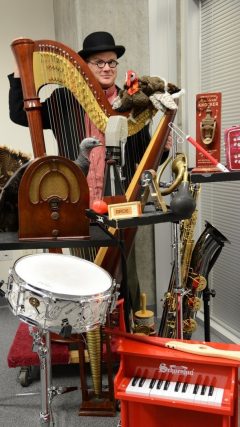 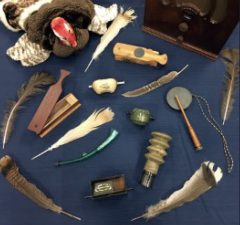 A collection of Thanksgiving-related paraphernalia used in Paulson’s show.

At some point in our show, a phone interview with a Turkey Hotline Operator is featured. Karen Fisher plays the character of the annual operator, and she does her best to relay appropriate thawing times, and regales with true stories of failure (schadenfreude!) and redemption (there’s always next year!). Above all, her character begs us not to stuff our turkeys. “Cook the stuffing separately, in an appropriate culinary vessel!”

The penultimate part of our fest features local schoolchildren telling funny Thanksgiving riddles from hand-held cue cards. We do this in the style of a1960’s Laugh-In go-go party. (When the go-go music stops, a child reads a riddle into a handy microphone, and, afterward, with nary a pause, the go-go music resumes, supportively.) The go-go music comes courtesy of my novelty house-band, the Teeny-Tiny Pit Orchestra (members over the years include: Kenneth Herman, Linda Kernohan, Christian Hertzog, Kirk Wang, Gail Gipson, Nick Carvajal and Matt Swagler).

The finale of the Annual Turkey Calling show features audience volunteers using our collection of turkey-calling devices to relay, in a truthful turkey’s idiomatic voice, why they should be considered for a Presidential pardon. Spoiler alert: the mellifluous interviews usually end with full Thanksgiving pardons for all who spoke.

Only sometimes, extra resin or a light buffing with sandpaper from a supportive host, might be needed for the devices to relay a successful appeal.

Parting gifts to the crowd include single turkey feathers from a no-kill turkey farm and fake (synthetic) wishbones from the Lucky Break Wishbone Company. True story: the company was founded by the patriarch of a large family whose many children always fought over the right to use the one-and-only-one wishbone to use in the traditional breaking ceremony. Your gregarious Thanksgiving gathering is promised a peaceful parting—“no harm, no foul” is assured with this synthetic wonder—as everyone gets their own wishbone!

Bonus:  here’s a past review of  our Turkey Calling Show:

Did I mention that we do this show in the style of an old-school, audience-participation, live-radio show?  Here’s a visit we did with KPBS radio some years ago:

San Diego Troubadour’s All the Bells & Whistles columnist Scott Paulson spends the day working as exhibits and events coordinator at the UC San Diego Library. He’s an alumnus of UCSD and also the University Carillonneur there (meaning he plays the clock-chimes atop Geisel Library…and yes, he takes song requests!)

Paulson is also the silent film curator at the La Jolla Historical Society and the host of Ether Tale Radio Theatre at WsRadio.com. His novelty band, the Teeny-Tiny Pit Orchestra, provides live music for many of Scott’s projects. Most recently, Scott provided spooky music and sounds at La Jolla Playhouse’s WOW! Festival for the radio horror series Listen with the Light’s Off from the So Say We All people.