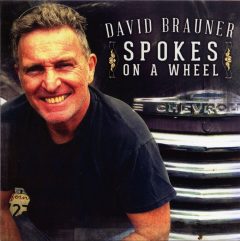 Had guitars been around 2000 years ago, it’s a good bet that a couple of Jesus’ hipper apostles would have been playing Hebrew folk music on them, and He no doubt would have sung along. David Brauner has released Christian Rock albums in each of the last three years, including God Is Love in 2012, a mix of sing-along folk pieces with some harder-edged guitar music with country and rock roots, with lyrical messages of New Testament renewal and celebration.

Brauner has a new CD, Spokes on a Wheel, and he has settled on a winning formula from the earlier discs: his dozen originals are played by a band including Peter Bolland (guitars), Billy Ray (drums), and Wolfgang Grasekamp (organ and accordion), with production by Sven-Erik Seaholm. The tracks lack gloss and don’t need it, since Brauner’s long suit is his heartfelt message. The songs have a beat that seems to make them the all-body, all-soul experience he intends.

The first few bars of “Water to Wine” are pure rockabilly, like something off an old Carl Perkins vinyl. Bolland lays down Sun Studios-inspired licks that complement Brauner’s tale about miracles from old times continuing today. “In the Garden” is a highlight, as a very memorable, almost psychedelic Bolland guitar riff and hypnotic backing vocals set the stage for Bible-based lyrics that invite the listener to join Christ in Gethsemane, “The time is drawing near/ The blood is mixed with tears.” Brauner takes personal inventory of his spiritual situation in “Praying for Relief” and again does it with a good hook that somehow recalls the catchy shuffles of early Eagles tracks.

Spirituals and Gospel music were critical to the evolution of blues and boogie music, and Brauner brings this full circle with “Roll It on the Lord,” which punches a brisk foot-stomp beat, while telling the faithful to place their burdens on Him. “Garden of Eden” is a story song that sounds like a great one for a church full of singers, “Now Adam and Eve had it cozy and nice/ Then the clouds rolled into their paradise.” Brauner makes “We Come Before You Lord” click by hitting a keyboard-rock groove that feels like Jackson Browne or Bruce Hornsby’s trademark sound, as he settles into his sermon about our need to seek forgiveness for our wrongdoings. Brauner the wordsmith and Bolland the shredder both make an impression on the pleasant rocker “Raise Your Head,” which features more sharp guitar work and lines like “Now He don’t text and He don’t phone/ But you can bet, you’re never alone.” A message for our time.
“I Saw My Lord and Savior” is an interesting, unusual track telling a narrative story from the point of view of a policeman, married and a father, shot by a stranger and near death. He sees the Lord — who just tells him to forgive his brother, and survives to tell about it.

David Brauner’s Spokes on a Wheel is well-played, enjoyable Christian rock by an inspired writer.

JOSH DAMIGO: I Will Be There