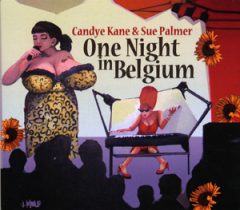 With a voice the size of the Louisiana Purchase, Candye Kane has belted out hard-driving jump blues for the last 20 plus years. She has also surrounded herself with some of the best blues and jazz musicians to be found in San Diego. Among the side personnel for her performances and recordings has been Sue Palmer, who has so often served up her signature barrelhouse boogie-woogie piano in Kane’s ensembles — while decked out in a stratospheric beehive and ever-so-cool cheap shades — that she can be thought of as a mainstay of Kane’s music.

Besides performing locally, their music has taken Kane and Palmer on tours across the country as well as overseas. From a recording made at a European concert in 1999, in which Kane and Palmer perform as a duo, the two women have released the disk One Night in Belgium. Nominated for best jazz album for this year’s San Diego Music Awards, this CD will certainly please any fan of Kane or Palmer.

By the time this recording was made, the two women had been performing together for at least a decade, and the melding of their talents and comfort with each other is apparent throughout the disk. The singing and playing is solid and assured. Kane’s powerful voice is well-suited to having an entire ensemble, with the amplifiers cranked, backing her up. Palmer nonetheless keeps the piano playing up on fortÃ© for the hard-driving tunes, comping the singer with some barreling riffs and licks.

Besides the blues, the disk contains swing, old jazz standards, and ballads. Kane and Palmer revisit such chestnuts as “Dream a Little Dream” and “The Lady Is a Tramp.” A few tunes are played for laughs. “Dragnet for Jesus” in particular brings out the LOLs. The variety keeps the disk fresh from tune to tune, and both women prove adept at switching gears into these other genres.

As the liner notes state, there are some tarnishes and blemishes on the disk, as there always are for live recordings. There doesn’t seem to be a lot of separation in the mix, and a few notes are more reached for than achieved. With the electronic wizardry inside the music studios these days, these little mistakes could have been corrected or covered up. Palmer and Kane chose not to put in the fixes on this disk, and this proves to be a smart move for this recording.

In painting over any of the recording’s shortcomings, the engineers and studio hot shots could have possibly covered up the most important aspect of this CD, which is the fun in the music. Palmer and Kane were obviously having a great time on the night of this recording, and each of the 14 tunes presented here has a certain spark because of it. The last thing anyone would want to do is mask the spontaneity and humor to be found in this performance.

The CD release party will be held on Saturday, August 6, at the Marble Room, 535 5th Avenue in downtown San Diego, 9:30pm.

Steve Earle: I’ll Never Get Out of This World Alive