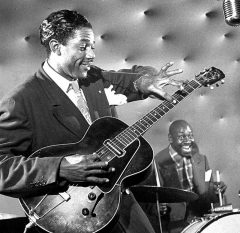 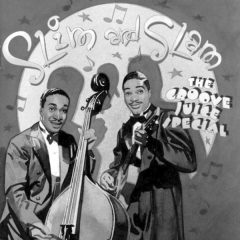 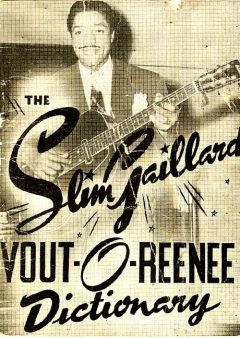 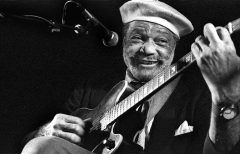 Slim in his later years.

We were recording on Sunset Boulevard, right across from a TV station. After we did three sides, the A&R man sent us out for some air. I was glad to get it because I didn’t have a fourth song. Just outside the studio they were repairing the street, and one of those cement machines was going put-put, put-put. When we were back in the studio the A & R man asked for the fourth title, I said ‘Cement Mixer, Putti-Putti.’ Everybody in the place broke up, and I started to sing ‘Cement Mixer…’ that’s why the lyric goes ‘putti-putti, putti-hootie, putti-vootie macaroonie.’ That’s all.”

That was Bulee Gaillard, better known as Slim, who, after a career in Detroit, New York, and Los Angeles, drifted down to San Diego. During the ’50s and ’60s Slim became one of this city’s best kept secrets, playing at the old Crossroads (at 5th and Market), bowling alley bars in Clairemont and Grossmont, and a variety of other clubs.

In the ’50s there was always an ad in the evening Tribune that said “Swinging Down Broadway” with Slim Gaillard. It also said “Voot-a-Rooney.” Now voot-a-rooney is something a boy in his teens is going to notice, so it wasn’t long before I got to check him out.

Born in Detroit, Michigan, on the fourth of July in 1911, Slim got into show business in the late ’20s as a solo act, simultaneously playing guitar and tap dancing. In 1937 he teamed up with bassist Slam Stewart to form the Slim & Slam Combo. Their first session for Vocalion Records produced Slim’s long-time hit “Flat Foot Floogie.” They were probably New York’s hottest vocal duo in the years before World War II broke them up.

Slim was released from the draft in 1944 and soon led his own trio at various clubs in Los Angeles, including Billy Berg’s (where he was the opening act for Charlie “Bird” Parker) and the Swing Club where he topped the bill. He made a string of, as he said, “very groovy, very mellow” recordings for a bunch of small labels including Queen, Cadet, Atlantic, Atomic, and Twentieth Century. Included were best selling hits like “Cement Mixer,” “Yep Roc Heresy,” and “Down by the Station,” which became a surprising hit as a children’s song (“see the little puffer-bellies all in a row, see the station master turn the little handle, chug chug toot toot off we go”). Slim even published a dictionary of jive talk, and that’s where he got intro trouble.

It was a time during the late 1940s when the Republicans were back in power that a guy named McCarthy was beginning to be heard from and “bebop jazz” was banned in certain quarters on the grounds that it “tends to make degenerates out of young listeners” (sound familiar?). Artists like Slim Gaillard, Harry the Hipster Gibson, and even Dizzy Gillespie and Charlie Parker were censored for the way they talked and played music. In some circles Slim’s bebop book was even called a code book for the Communist Conspiracy. Whereas only a year before Slim was regularly appearing on Armed Forces Radio’s “Jubilee” series, now Time magazine was noting with shock that his version of “Cement Mixer Putti Putti” had sold more than 20,000 copies in Los Angeles alone. As other examples of Gaillard’s subversion, it cited the titles “Dreisix Cents” (30 cents in Yiddish), “Fried Chicken O’Routee,” “Dunkin’ Bagels,” “Scotchin’ with the Soda,” “Jumpin’ at the Record Shop,” “Cuban Rumbarini,” “When Banana Skins Are Falling,” and “The Groove Juice Special.”

After finding that he couldn’t get work in the L.A. area anymore, Slim came down to San Diego for a time and left the so-called bebop depravity behind him. Fortunately, he brought his sense of humor and ability to entertain along with him. Slim became an important part of the city’s night life scene here in San Diego. Occasionally he would leave San Diego for an extended gig at Birdland in New York City or at other new jazz venues around the country, and in the ’60s and ’70s for the new series of jazz festivals that started up in places like Newport, Rhode Island, and Monterey (I saw him reunited with Slam Stewart at Monterey sometime in the late ’60s). He also appeared as an actor in the “Roots” television series in 1980.

Slim never regained his 1940s popularity but did make a place for himself as an elder statesman of bebop jazz. During the 1970s, collectors rediscovered his early sides, which led to reissues of early stuff on labels like Hep, Savoy, MCA, Verve, and even a couple of labels created for him like Putti Putti Records. In 1982 he went back in the studios for a series of new recordings on Hep.

I saw Slim for the last time at the old Crossroads (some time in the 1970s) and I got a few words from him on tape about his glory days in the ’40s. “I first worked for Billy Berg in Beverly Hills and moved with him to the Swing Club in Hollywood and then to the famous site at 1356 North Vine Street. Out came ‘Cement Mixer’ and then it all took off. Billy’s was bulging every night with film stars, including Ronald Reagan and columnists like Hedda Hopper. They’d all come to see the nutty guy with the ‘putti-putti.’ The place got plusher and my money went from 65 dollars to $1,200 a week. Yeah, that mixer really vacuumed them in.

“I was doing three gigs a day at the Orpheum, a network radio show, and several sets at Berg’s, and to cover these three locations Billy made an arrangement with the LAPD to have a squad car with red lights flashing and a siren wailing to get us around on time… Billy Berg’s was more than just fun, it was a great pleasure. That time all came to an end so damn quick and for no good reason that I could ever figure out.”

Slim spent his final years in Europe where he continued to explore the shadow world between humor and jazz. He died in 1991, but his contributions continue to be reissued and will probably be with us as long as there’s music and laughter.

Reprinted from the August 2007 issue of the San Diego Troubadour.