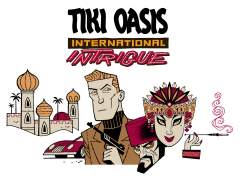 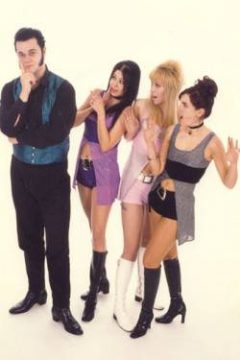 The Diaboliks. Photo by Frank Noone. 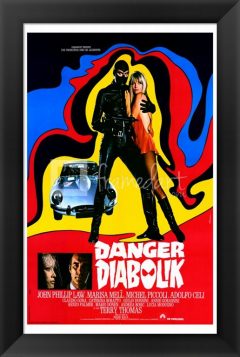 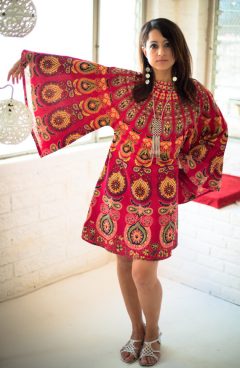 One of Stax of California’s creations 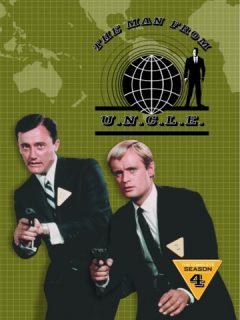 Espionage will play a major role in this year’s Tiki Oasis festival, the annual San Diego tribal gathering where Martin Denny melodies and rum consumption happily co-exist in a mythical Polynesian paradise. With this year’s theme being “International Intrigue–Den of Spies, “attendees may expect cloak and dagger imagery, convincing (and unconvincing) foreign accents, and the latest in spy clothing and gadgetry.

And, if one (mostly) girl group has anything to say–or sing–about it, things could get quite diabolical over the course of the festival. Tiki Oasis always has a welcome mat out for group reunions, and one of the most anticipated lineups will be the ’60s underground sounds (garage, fuzz, freakbeat) of the Diaboliks. With former band members coming as faraway as Australia or as close as La Mesa, this is a show already creating a buzz over social media.

Bassist Anja Stax lives in La Mesa with her husband (Ugly Things fanzine publisher), Mike Stax. When they are not putting the final touches on an issue or spinning rare vinyl as DJs, Mike and Anja both play in the veteran garage-psych group, the Loons, and Anja is also performing on bass for an all-girl band called the Rosalyns. “My last show with the Diaboliks was at the Wild Weekend in London in 1998,” Anja explained. “ It was a huge ’60s subculture festival, which was organized by Babz (the Diaboliks’ lead singer) and her husband, Josh. They both ran a club called the Frat Shack at the time and this festival was an extension of those crazy and amazing club nights. It seemed a fitting occasion and shortly after that weekend, I followed my heart to be with Mike and moved to San Diego. Previously there was a lot of travel back and forth between continents and we made the decision to settle in San Diego. I parted on great terms with the Diaboliks and we all remain friends to this day.”

The Diaboliks continued for a few more years according to Babz Collins, whose remarkable knowledge of the band’s history borders on the encyclopedic.” We last played as the Diaboliks in about 2000, I think; that’s 17 years ago. Wow, that’s hard to believe!” said Babz. “We had a couple of other bass players after Anja left and we ended up with John Skittles (our drummer), Sophie’s husband. So we were two gals and two guys for a while. I guess one of my fave [shows] was playing the now legendary Las Vegas Grind in 1999. Well, I was organizing it, so of course I was gonna put me own band on! That was a real blast. I migrated to Australia early 2002, but luckily we all remained friends and look, lo and behold, we’ve been asked to reform for the Tiki Oasis. Wahoo!”

After playing in her native Germany in a band called Thee Cherylinas, Anja moved to England and became involved in the same London club and music scene where Babz was involved. “I was part of the Shoreditch scene in the early ’90s that focused around ToeRag Studios,” said Babz. “Thee Headcoates, the Kaisers, and we were running a club called the Frat Shack, which mixed together all the genres of music that came out of the late ’50s and ’60s. After my first band the Slingbacks broke up I formed the Diaboliks, which was by far the more successful band, drawing on our musical loves: surf, beat, garage, rock n’ roll, twist. I had all the ‘Girls in the Garage’ comps and I loved the image of the bad ass girls next door featured on them. We sent Lee Joseph from Dionysus Records a little demo tape and he faxed us back (no email in those days) that he would love to release an album. We were over the moon! In fact Lee put us on a Girls in the Garage comp when he was re-pressing it as an extra secret bonus track. I’m very proud to be [in] the only living girl band to appear on one of those records! We had quite a few single releases on various small record labels from all over the world: Screaming Apple, Thunderbaby, Mademoiselle, Vinyl Japan… so I guess you can say we were a truly international band. Tons of touring through France, Germany–it helped having a German bass player–UK, Belgium, Norway, and, of course, Italy, our spiritual home mainly courtesy of Gianni Fuso whose Festival Beat is still going strong. Then we were invited to LA to do the Dionysus Demolition Derby. That was great.

“The image of the band has always been at the forefront and we always looked fab on stage and we always aimed to put on a good show with loads of go-go dancing and bad jokes thrown in.We are all so excited about being given the chance to perform again, thanks to [Tiki Oasis Organizers] Otto and Baby Doe Von Stroheim. Plus, we’ll be sharing the stage with our old friends The 5, 6, 7, 8s. What more could we ask for!”

The origin of the group’s moniker is a story in itself. “Diabolik” was originally the name of an Italian comic book character created by sisters Angela and Luciana Giussani. Diabolik is a calculating thief who eludes police and foils the attempted capers of other criminals. It was later turned into a movie directed by cult film maker Mario Bava and starred ’60s icon John Phillip Law [he played the blind angel in Barbarella] in the title role. “I remember watching a black and white version of Danger: Diabolik late night when I was on holiday in Australia circa 1987 and it completely blew me away,” Babz recalls. “Australia only had color TV sometime in the ’90s! So when I finally found and watched the technicolor version it was a life changing moment for me. Everything about it–the clothes, the music, the story, the cheesy acting, the atmosphere–I soaked it all up. Mario Bava remains one of my favorite directors and I had the honor of meeting John Phillip Law too!

“Years later when I got the band together, it just had to be called the Diaboliks. I don’t think the rest of the band got a choice on that matter! It worked really well, ’cause when we started touring Europe, we realized what a cult following the comic had, too, especially in Italy, so they really warmed to us. I was even given an honorary membership to the Diabolik Fan Club in Italy.” The fashion and music blending within the Diaboliks has resulted in Anja creating Stax of California, fashion saluting the mid-’60s spirit of the Golden State. “Well, that also has a Diaboliks connection,” said Anja. “Our singer Babz is an amazing fashion designer; she actually went to school in London and designed and made a lot of outfits for various film productions, as well as styling her and her now husband’s club, the Frat Shack, with go go dancers and matching outfits. After I joined the band she offered to teach me how to sew and construct outfits and help her with the running of the Babzotica Boutique, which was opened a few months after I started working for her. I really owe it all to her. She taught me so much and I am eternally grateful for her skill and patience explaining things and helping me succeed with it. After I moved to the States I did not really do anything with it, but my job situation changed about a two years ago so I thought it would be great to get back to creating and sewing. There is a lack of good quality vintage clothes–or they are super expensive now–so I felt it was a good idea. Most items I make are one of a kind to keep it exclusive to the person who will end up wearing it.

“I just finished the second line, which premiered at La Loupe Vintage shop here in San Diego. It focuses mainly on women’s outfits this time and as the label states, is heavily influenced by mid-century fashion in California. Super fun and colorful. All items will be available in my Etsy shop and at various ’60s events or pop up fairs around SoCal. I am not sure about a fashion show at Tiki Oasis this year–we did one on the Sunday by the poolside last year–but if the opportunity comes I sure will take it.”

Tickets remain available for this year’s Sunday night finale at Tiki Oasis, which will highlight the best garage rock from SoCal and Europe. Representing the former will be the bands the Sound Reasons and Los Sweepers, and coming over from France will be the acclaimed group Les Grys Grys. Although many ticket packages sold out at blinding speed this year, there are still some great options available. Visit the Tiki Oasis official webpage (Tikioasis.com) or the Tiki Oasis Facebook Group page on a daily basis. You’ll never know when a last minute surprise posting will appear.

One of the daytime symposia identifiable with this year’s theme of international intrigue will be The Secret World From “The Man From U.N.C.L.E.” with Robert Short on Friday, August 11. Short appeared on the series and later became a technical advisor on the television and film sequels. The United Network Command For Law and Enforcement (U.N.C.L.E.) lost its most famous secret agent when actor Robert Vaughn–U.N.C.L.E.’s Napoleon Solo–passed away last November. Vaughn’s significant contributions to the series should bring a certain poignancy to Short’s presentation.

Tiki Oasis 2017 will kick off on Thursday night, August 10, outdoors at the Bali Hai Restaurant on Shelter Island, followed by three days and nights at the Hanalei (AKA Crown Plaza) in Mission Valley. Visit Tikioasis.com for updates.

Steve Earle and his Outlaw Ways