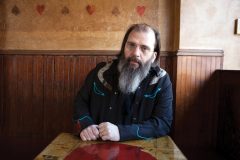 Steve Earle may be the most productive throw-back in today’s country music scene. He’s not manufactured, postured, or out to make hits about gate parties and driving pickup trucks. He is a throw-back in the sense that, while he has no models in his approach to life and music, the mentors in his organic artistic and professional growth include such legends as Hank Williams, Willie Nelson, and Waylon Jennings. With the release of his new album, So You Wanna Be an Outlaw, after a series of what may be the most dependable run of artistically consistent albums in country music history (between, he opens the book of the Outlaw Movement with the aptly titled, “So You Wanna Be an Outlaw,” dedicated to Waylon Jennings.

Earle can most likely relate to Jennings’ classic hit song, “Don’t You Think This Outlaw Thing Has Done Got Out of Hand?” If anyone has earned the right to be called “outlaw” it is Earle. In the span of his 62 years, he has been heavily influenced by the Outlaw Movement of the ’70s even as he pushed the sound and the lifestyle far beyond anyone imagined in 1971. His music echoes with the best of the country troubadours over the last 70 years. He has been associated with friends and heroes like Rodney Crowell, Townes Van Zandt, and Guy Clark as he made the transition from the New Traditionalist movement–a period he has called “the great credibility scare of the ’80s–to forging the new sound found in Americana music.

But, he’s also paid his outlaw dues, having run afoul of the law more than once. In the early ’90s he moved through a four-year lost weekend and career decline. It began in 1990 with his fall into heroin addiction, which led to his arrest for possession in 1993. But, like any outlaw worth his salt, he was unable to leave well enough alone: He returned to his old ways in 1994 with an arrest for cocaine and weapons possession. When he admitted to the possession and was a no-show for his court date, the judge slapped him with a 12-month jail term. It became his wake-up call. He walked so near to death, his jail sentence became a life saver for the songwriter.

Earle was a model inmate and was released from his term after two months. As a part of the completion of his sentence and parole, he was sent to an outpatient drug rehabilitation in Hendersonville, Tennessee. He was not cut out for a life in and out of jail–or addiction for that matter. It seems the outlaw thing really got out of hand for Steve Earle. And then some.

This is when the outlaw came to Jesus. There are rare moments in our lives when something of a light turns on and you can see what your life has been. This is what happened to Earle. He had a moment of clarity. He officially became a recovering addict complete with active and willing participation in 12-Step meetings and a new zeal for his own re-born creativity. Today, he attends meetings, has a sponsor, and faces his life and his problems, successes and all. He has even appeared on HBO’s The Wire as a ex-con addict and as a New Orleans street singer in Treme.

While his outlaw credentials did not come easy, they are solid. He has outdone his Outlaw Movement heroes in living the authentic life others only sing about, David Alan Coe being one exception!

But his 21-year-run of clean time has not softened Earle’s music, his songs, or his life-style. While there are no drugs or run-ins with the law, he has been an outspoken opponent of the death penalty. He has unabashedly described himself as a liberal democrat and a socialist. Kris Kristofferson described him well in the song “Wild American,” which goes against the grain of the Islam-a-phobia in vogue today:

I remember it was something that you said
they put your picture in the paper and a price upon your head.
You said, “brother if you really give a damn,
just remember we’re all sons of Abraham.

From day one, Earle has poured his life experience into this music. Beginning with the classic 1986 release Guitar Town, which told stories of his early singer-songwriter days, he began a series of albums that portrayed a restless gypsy soul, forever observing and relating what he has seen and where he has been. Today, CMT (Country Music Television) has ranked Guitar Town as #27 in the best 100 country albums of all time.

Essentially, Steve Earle has had two careers. His first time in the public eye began in 1982 and ended in 1990 with his fall into heroin addiction. He began as a staff writer in Nashville with songs recorded by Johnny Cash, Waylon Jennings, Shawn Colvin, Emmylou Harris, and Vince Gill. He then released three solo albums between 1986 and 1990, which pushed the country music genre to its outer edge. Like Waylon Jennings a decade before, he brought a rock ‘n’ roll mentality to country themes. But, his rock orientation include heavy metal, alt-rock, and punk. While the mainstream country scene didn’t know what to do with him, Guitar Town ended up #1 on the country charts. Like the Outlaws of the ’70s, he broke down the established Nashville-based music scene and opened the door to New Traditionalist, alt-country, and eventually, today’s Americana music.

By 1990, Earle’s addiction had affected his life work, which was evident with the poorly reviewed The Hard Way. According to Mark Deming on the Allmusic.com website, the results were not up to his previous four albums. He put it bluntly, calling it “a bit of a mess, often sloppy and overbearing, where his country sides had been dynamic and precise, and Earle’s voice was starting to show the strain of his lifestyle.”

Since his release and rehabilitation. Earle has been prolific and has achieved the kind of success in country and Americana music that makes for the stuff of legend. He is not about to quit now, even through hardships like a divorce from singer-songwriter, Allison Moorer and the 2014 Autism diagnosis of their son, John Henry.

Like his days when he was just released from jail, he has held on to his self-styled personal faith and the practice of his recovery. Today, he emerges as creative as ever with the release of his latest album, So You Wanna Be an Outlaw; the title song is a duet with Willie Nelson. The album rocks as hard as ever and demonstrates his ever-growing skill as a songwriter and recording artist. He has also founded an annual songwriting course known as Camp Copperhead. Each summer, he teaches an in-depth five-day course on songwriting, complete with guest artist/teachers and the chance for participants to write original songs. It’s the kind of continuity and presence to others that would not be possible for some immersed in addictions. This presents other songwriters with the rare opportunity to learn from one of the greatest living songwriters. It is a chance for Earle to give back what he has learned and the gifts life have given him. And, perhaps, he’ll help to make the next Steve Earle come alive…hopefully minus the outlaw story!

Steve Earle & the Dukes, with an opening set by the Mastersons, play August 10 at the Belly Up, 143 S. Cedros, Solana Beach, 8pm.

With Intrigue as its Theme, Tiki Oasis 2017 Could Turn “Diabolik”