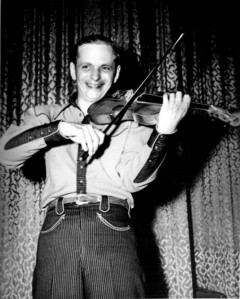 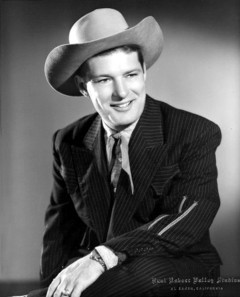 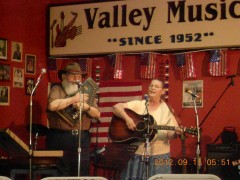 Andrew “Cactus” Soldi, Eugene “Smokey” Rogers, and Larry “Pedro” DePaul all got together as members of the Texas Jim Lewis Band (the Lone Star Cowboys) who made their first recordings back in 1937 with Cactus on the fiddle, Smokey on guitar and banjo (and occasional vocal), and Pedro on the accordion. They moved on from there in the early ’40s to Spade Cooley’s new big country swing band (Spade had done a stint with Texas Jim, too, replacing Cactus on the fiddle when Cactus had moved onto the Cal Schrum Band). The Western Swing big band was just right for the boys returning home from WW2 who wanted to get out and dance. The place was the Riverside Rancho where the band moved in for a long gig, doing live radio broadcasts, making some movies and lots of hit records (many of them written by Smokey) for the Columbia label. Along with Cactus, Smokey, and Pedro, the band featured fine singing by Tex Williams and Deuce Spriggens, some hot steel guitar by Joaquin Murphy, and even a harp by Spike Featheringstone. They billed Spade as “King of Western Swing.” Now, from what I’ve heard, Spade was not the easiest guy to get along with and along about late 1944 there were rumblings and mutinies being talked about, which resulted in most of the band walking out on Spade in 1945. They all milled around for about six months and eventually came back together under the leadership of Tex Williams as the Western Caravan. A recording contract with Capitol ensued and there they were — Cactus, Smokey, Pedro, Tex, Joaquin, and even Spike — out from under Spade’s tyranny and with a long gig at the Palace Barn in Hollywood. Like he’d done with Spade, Cactus did a lot of the band’s arrangements and, with sort of a business head, helped keep the books.

The ’50s rolled around and with public dancing sort of in a lull, Tex decided to go out on his own, leaving the Western Caravan under the leadership of Smokey (actually it was a partnership of Pedro, Cactus, and Smokey) and an opportunity to come down here to San Diego and do daytime television on KFMB-TV Channel 8 (the only TV station in town during that time). And so, for four hours every day it was “Smokey Rogers’ General Store” with the Western Caravan, Roy and Don Hodsed, Laverne and Betty Myers, Slim Dossey, and a whole lot of other San Diego personalities, including Terry Preston who eventually changed his name to Ferlin Husky. About the same time Smokey, Cactus, and Pedro took over management of the Bostonia Ballroom, then “one mile east and one mile north of the city of El Cajon” (it’s part of El Cajon today) and in 1952 they opened Valley Music in its first and long-time location on E. Main street (a block east of the El Cajon courthouse and civic complex). The same week that Valley Music opened I moved to San Diego and my Uncle Tony in Chula Vista, thinking to do us a favor, took my Dad and Mom and me out to Bostonia to see Hank Williams (I was 12 years old). That was only the first visit to Bostonia for me. Thru the 1950s, ’60s, and ’70s right up to its closing I was a regular visitor. I saw Marty Robbins, the Maddox Brothers and Rose, Cousin Ford Lewis, Merle Travis, Joe and Rose Lee Maphis, Wesley Tuttle, the Louvin Brothers, Ernest Tubb, Ray Price, Jenks “Tex” Carmen, Johnny and Jack, Jean Sheppard, Terry Fell, Wilma Lee and Stoney Cooper, Hank Snow, Hank Thompson, Hank Locklin, Bob Wills’ Texas Playboys, Johnny Cash, The Carlisles, Wynn Stewart, and Buck Owens. The last concert I saw there was Roy Acuff shortly before it closed.

Often on a trip to East County I’d stop by Valley Music to buy picks or strings and I once bought an old Harmony Sovereign guitar (I think it was the second guitar I owned). For a time they also ran Roger’s Record City in El Cajon on Magnolia. I’d stop by if I knew Smokey was going to be there because he was always good for a story about the way things were, and I was always ready with a question. He had a pretty good ear for the kinds of music I liked and often he’d have something put away for me.

I was always amazed at how busy these folks were. They’d do the TV show on weekdays and act as the house band at Bostonia a couple of nights a week. Often on a Friday or Saturday they’d join Tex Williams for a gig in the Los Angeles area. For a time Tex had a Sunday afternoon TV show live from Knotts Berry Farm in Buena Park and Smokey, Cactus, Pedro, and Joaquin were usually there. Yet Cactus had time for Valley Music and Pedro had his accordion students there, and Smokey would be at the record shop. I used to wonder when they got time to sleep.

As Smokey and Pedro moved on to other things Cactus remained in charge of Valley Music and it still — after more than 65 years plus since its opening — Andrea Soldi Long still runs the operation. On September 14, there was a farewell concert for the store. Andrea’s brother Cactus Jim’s band played and a whole bunch of people had a chance to say goodbye to the oldest music store in San Diego County.

These people provided the city of El Cajon with so much history, I’m amazed that no one from the local Historical Society or the city government hasn’t lent a hand. They didn’t do it when the Bostonia Ballroom closed and I haven’t heard a whisper about Valley Music. Andrea plans to continue with music on a mail order basis. She has some wonderful photos taken at the various events they’ve been involved with. Watch for them on Ebay. Also watch for the name Valley Music. It wouldn’t surprise me if they continue to play a vital part of the music scene in El Cajon and East County.