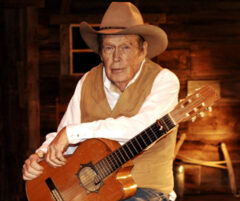 Last month I heard from my old friend Bob Bovee that our mutual friend Glenn Ohrlin, maybe the greatest cowboy singer that ever lived, had passed on at age 88 in Mountain View, Arkansas, where he had made his home for many years. It was only about 10 days before his passing that he’d been out to the Cowboy poet gathering in Elko, Nevada, where he’d been a fixture for many years, and he was telling folks that this might be his last visit out to Elko because he was getting on in years and it was getting hard to make the trip out.
I first met Glenn in 1964 at the UCLA Folk Festival. I’d gone up there with a group of fellow folkie miscreants from San Diego and was sort of playing the fool with a clip-on earring I had put in my nose while walking from the cafeteria up to Royce Hall where the festival was taking place.
I heard this drawl behind me. “It must be one of them hip smokin’ dopies I’ve heard about in California; this one’s got a nose ring.” I don’t remember what I did or said but it must have made an impression on Glenn because later that summer at the Newport Folk Festival, on the East Coast, I ran into Glenn again and he instantly remembered. “You’re the feller from California that had the ring in his nose.” I opined that I was and we got to be pretty good friends after that. Glenn had a style of singing that most no one could copy. He’d learned his guitar licks from a Mexican guitar player during the Korean war but had started collecting songs quite a bit before that, maybe about the time he left his home in North Dakota to head out west and be a cowboy. His transition from North Dakota farm boy to Arizona cowboy to champion rodeo cowboy several times over is in itself a novel in the making. From there to song collector, writer of the best damn book on cowboy songs ever written (The Hell Bound Train, University of Illinois Press) to singer and storyteller and regular on the Folk Festival circuit. Glenn was special. I started having him out as a near regular to the San Diego State Folk Festivals in 1975 or thereabouts, and I’ve lost count of how many festivals he played. I got to the point where a festival didn’t seem right without him being there. Glenn always reminded me of the “nose ring at UCLA” and he’d tell folks, “You may think ol’ Lou is some kind of folk impresario but I knew him when he was a California wild man with a ring in his nose.” 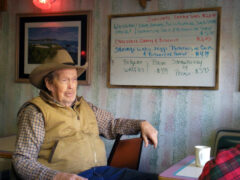 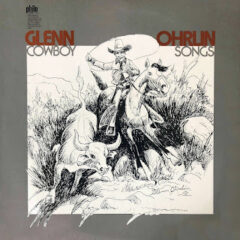 Just out east of there a little bit was one of these private schools and they’d call us up from time to time and say there were loose horses on their ground and we’d come out and chase them away. And they were good customers so he’d always send me and Harvey, his nephew, out to run them off. On this day there was only me and Al there and I was already riding a Colt I had saddled. The school called and said there are loose horses on our grounds, could you come and run them off. Al said sure, and he comes out of the office and says I wonder what I ought to ride and I says why don’t you ride the white horse, Al, and he says yeah, okay, and he catches him and saddles him up and away we went. Well, we got out there, and there were a few horses on the school grounds and we hazed them out onto this desert flat and he got them into a run about a quarter of a mile or more. I was behind and Al was ahead and the horses in front of him. He hollers back I guess we’ve run them far enough and he starts to stop this white horse and it looked to me like he just flattened out a little bit more. Then he was in the same shape I’d been in. Yankin’ and yellin’ and tryin’ to get him to stop but it didn’t slow him up at all in fact he just picked up speed. Finally, he realized he wasn’t gonna get him to stop so he hollered back it me, “Hey, Glenn, come and pick me up, catch me you know.” So, I acted like I was spurrin’ my horse to catch up, but actually whenever I got close I’d hold back a little. I didn’t want to catch him, in fact I wanted him to run him clear out of the country. We went on for a ways like that going lickety split and out in front of us was a highway that made a turn at right angles to the way that we were going. I hollered, “You better turn him so you don’t cross that concrete pavement and maybe get run over or have a terrible fall.” He said, “Yeah, you’re right,” and he managed to bend him around to the left like I had done, and he took off across the flat. Well, there was a lot of mesquite and brush out that way and I thought he knew about it (he’d been there a lot longer than I had), and there was a dry river bottom and out through the brush was a bank about ten feet high. I’m tailing along after him through the brush and all of a sudden he’s gone. So, I rode up to the river bank and looked out and there sat Al on the white horse cussin’ and looking terrible. Finally, he realized I was there and he looked back up at me and I says, “Why didn’t you pull on the reins?” 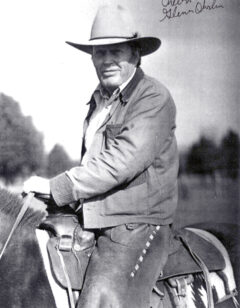 That white horse got me away from there finally. There was a guy from back east spending the winter there. He’d go riding every day and then he’d stand by the corral and look at this white horse. I realized that the guy thought that it was one hell of a horse. So, one week Al couldn’t pay me my wages for the week, which was 15 dollars a week including room and board, and I saved all the money I made there. He said can I give you something instead of the 15 bucks and I said, “Yeah, give me the white horse.” He knew the horse was worth 30 bucks anyway and he sort of grinned and said, “Okay, I’ll give you the white horse and he fixes me up a bill of sale that didn’t have to have a brand inspection, no brand on him. Later that day when that feller went horseback riding, I saw him standing by the corral just looking at the white horse, gazing at it. When I went and stood beside him he said, “Glenn, what would Al take for that white horse?” I said, “He can’t take nothin’ for him; that’s my horse.” He asked what I would take. I said, “I’d take $300.” He gets out his billfold and he’s paying me off and in a little bit Al came by and the man said, “Mr. Gamble, would you put the white horse in a box stall. He’ll be a border ’til I leave and go home to Michigan.” Al said, “Oh sure, Glenn, you catch him, so I caught him and put him up. The fella left and Al says, “I suppose you made a few bucks, didn’t ya?” I said, “Yes, I did.” He says, “Well, dammit, what’d you get for him?” Well, I told him and it was pretty bad for a little bit. I thought he was actually gonna die. Anyway, that was my gettin’ away money. He said he needed me, but he was sort of glad to see me go.
Recordially,
Lou Curtiss
Note: This is a reprint from the March 2015 Troubadour.

Me as a Radio Host