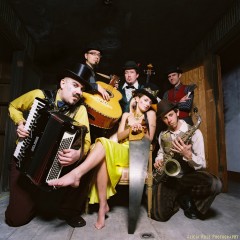 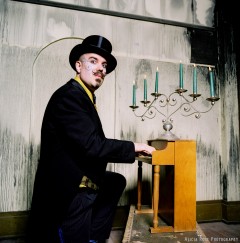 In a compelling contrast to the usual range of acts that are booked at AMSD Concerts, this month, on June 27th, the church on Mansfield Street plays host to the roguish ensemble Vagabond Opera, an artistic collective out of Portland, Oregon that’s impossible to characterize beyond being a surrealistic leap into another place and time. Without coming so much as a hairs breadth within the en vogue pop cultural milieu of 2013, Vagabond Opera’s music is as arresting as it is vital — bearing the stamp of a dozen or more musical traditions: European cabaret, vintage Americana, Balkan belly dancing, neo-classical, opera, and old world Yiddish theatre, with occasional calliope clusters of 19th century Viennese circus music. Transport yourself to Paris in the ’20s, dancing in the Moulin Rouge to the soundtrack of La Strada whilst grokking to the bar room meditations of Tom Waits and maybe, just maybe, you’ll have a flavor of the post-modern vaudeville sensibilities that constitute this unique presentation.

The ensemble came together in 2001 under the auspices of musical director Eric Stern, a classically trained operatic tenor who composes many of the songs in the group’s repertoire as well as plays the piano, accordion and acts as all-round Master of Ceremonies. Stern’s background took him from his native Philadelphia to studying the disciplines of opera in Eastern Europe, ultimately bringing his unique talents to the bohemian mecca of Portland. “You know there’s that first formation of getting the right people, playing out, and things like that,” says Stern. “Vagabond Opera was really an idea. Because I had been in the opera world and that just wasn’t satisfying to me. But then coming to Portland made the idea feasible because there’s a lot of musicians and it’s cheap to live here, where our values really reflect art and community.”

After an initial two-year start up period the group released their first full-length CD in 2003, titled Get on the Train. The old world melting pot of styles that were established on their debut have remained consistent across the last decade, as evidenced on 2006’s Vagabond Opera, 2009’s The Zeitgeist Beckons, and 2011’s Sing for Your Lives. The productions bristle with energy and there is a noticeable arc in the originality of the songwriting, particularly from The Zeitgeist Beckons onward.

In addition to Stern, the ensemble for the 14-date West Coast Pocket Watch Tour also includes the rhythm section of Drew Nelson on acoustic bass and Susan Lucia on drums, Paul Evans on saxophone and winds, and spotlights the unique talents of Annie Rosen, who sings lead, plays violin, dances, and acts as the co-director for this current program in a mixture of old and new material as well as drafting in a story to tie the various threads together, a first for Vagabond Opera. Adding to the visual spectacle will be the expressive (and impressive) eye candy of the Sepiatonic Dancers, featuring Karolina Lux and Bevin Victoria.

Stern: “I think that what this tour is reflecting is that we finally got together a show that has a little plot running through it, a unifying narrative of cohesion. That’s the exciting thing about this tour for me and to be working with Annie Rosen, who is co-directing it with me, this graduate of the dell’ arte school and to really be utilizing her skills in this arena.

“It’s a fluid ensemble. I mean, you’ll hear some core members on these albums but you’ll also notice they’ve changed. So on this tour we are using lots of members of the larger Vagabond Opera community. But none of the people who are on the latest album are on this tour.”

After previewing the recorded works of the ensemble a couple of questions emerged: is this one great big piece of performance art and how relevant are these musical ideas to our current culture? “I guess I would take issue with our music not reflecting contemporary society,” says Stern. “I have a lot to say about that. I think the way that we perceive music now does reflect contemporary society and in a bad way in that we don’t stand on tradition. Rather, we’re looking for the newest form. Where you have other music from anywhere else in the world — the Arab world, the opera world — it was built on a strong tradition that was expanded upon. I really have no problem with going back to something 50 years or a hundred years in our culture because I feel that those forms of music, those sounds are a rich vein to be mined. And furthermore, we’re not a museum piece. We’re not trying to do things exactly as they were at those times. These forms are just colors in our paint box.

“I’m writing music to please myself and my audience and sometimes, in the best situations, it’s coming through me as if I am a medium. I’m not sitting here thinking, ‘well, how will this reflect contemporary society?’ I think structurally, so there are certain chord changes that might evoke a certain time but are also equally valid as a choice in your architecture of song. Another element that comes into this is the Eastern European tools that we use in our music, stemming from interest in heritage and this is contemporaneous in the world today.

“My people on my grandmother’s side are from Slovakia and I think that our family came to America because it was shitty in the old country. And we have this American attitude of looking forward and that has served us well in some ways. But I suppose I’m also interested in looking back and collecting those strands of heritage, musical or otherwise. My family willfully abandoned those traditions — I mean, that was the bargain — when you become American you speak English and forget all that old world stuff. But now that other generations have come along we realize that something important was also given up.”

How does Dada/absurdism factor into this world view? “As a method of working and generating art I think Dadaism is useful and I certainly think it was an important movement,” says Stern. “Coming up in Philadelphia we have a great art museum and many a time I went and looked at the works of Max Ernst and all those early Dadaists. I certainly feel a French influence in my life as well, and I think that kind of thing can provide rich, imaginative landscapes for songs, stories, and such.

“Being absurd is a useful tool in performance, just for the humor factor in and of itself and it’s a useful tool in generating work. When I think of Dada in generating work I think more of the random element — of cutting words out and putting them all together in ways that generate ideas. So what it does is give your brain a rest — or it tricks your brain because your brain is trying to work on a song and it takes it out of that field of puritanical work like, ‘I’ve got to get this done’ and puts it into another field where elements are combining that you didn’t even know could combine, just because you cut out a few words on pieces of paper.

“There are two ways I often go when writing songs. I tell people this when they ask advice because I like to use characters. I don’t usually write songs about myself. I’d rather generate a story about a character. The other thing is there is a way of combining words — Tom Waits does it very well, or I should say that he and his wife Kathleen Brennan do it very well. There is one song off our latest album called “Penny” with the line ‘The soldiers woke him up that night, strings of banjos, sugarcanes.’ I mean, what does THAT mean? For me it reminds me of The Grapes of Wrath but I hope in some way that it evokes images in people’s heads.”

The songs are evocative indeed, summoning forth a universe similar to the one Bob Fosse created in his 1972 tour de force Cabaret. Stern says that he hears comparisons to Kurt Weill and Bertolt Brecht a lot and “it’s true, they’re huge influences but I love Bob Fosse’s work as well. But you know who else I really like is Eartha Kitt. I listened to all of her records when I was growing up. She sings in so many languages and she does it so well and in so many styles and I thought wow, here’s an American who can do this, she was also a huge influence on me.”

Does decadence play a role in this particular type of culture, like in the Weimar Republic in 1933? Stern: “Well, it certainly did in the Weimar Republic. I haven’t thought of it too much in terms of our own music but I certainly think that when we think about cabaret in this country we unfortunately only think of ‘jazz hands’ or something like that. We think of dinner theatre on a Sunday afternoon with old folks. I don’t know about decadence but there is a rich tradition of real character and commentary on society, what I’d call realism. Gritty realism.”

Does society really need a cabaret? Stern chuckles and replies with “I think that we, as a people, desire spectacle, humor, innovation, and interesting musical forms. I don’t know if all of those would come under the aegis of cabaret. However, I do think that it fills a vacuum, or begins to fill a vacuum that people need. People want good work in front of them, absolutely. So I think that people do need that.

“And it is called Vagabond Opera for a reason. I was trained in opera and I really do believe in the power of the trained voice so putting that forward in all of these songs is very important to me personally.”

Lastly, is there a philosophy behind Vagabond Opera? Stern: “Yeah, sure there is, we’re trying to put forth alternate possibilities of what it can be to be a band, right? People think of a band and automatically it comes to their head: guitar, rhythm guitar, bass and drums, lead singer. And I think it’s important to put forth the idea that there’s people who are trained in fine arts who can still meet people in the club, in the theatre, in the performance venue, and put on a spectacle and do ensemble work. So if we have any mission or statement I would guess it would be stretching the minds of people to the possibilities of what an ensemble can do and how exciting it can be.”