Thank you, January 1, 2021! Lots of reasons to ring in the New Year with gusto. The chimes atop Geisel Library at UC San Diego is where I play live requests and mark meaningful dates. I won’t be able to climb up to the Library roof to play live this quarter due to COVID restrictions, but the chimes strike themselves automatically on the hour—and on a good day, when the wind is just right, I can hear the tolling from my apartment! Here’s a pre-COVID visit to the roof of Geisel that was filmed by Alumni Affairs:

My favorite January ritual is listening online to other chiming clocks featuring New Year’s greetings, including Big Ben in London. That massive instrument is being refurbished and has been largely silent the past few year, but exceptions were made for New Year’s Eve and New Year’s Day. Here’s a great sunlit video with a true view of Big Ben chiming: 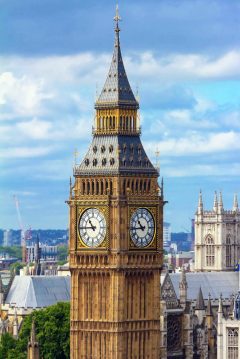 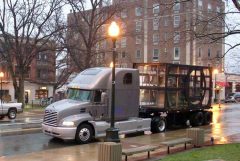 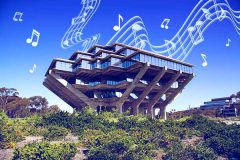 The nickname Big Ben more precisely refers to the largest bell in the tower (the one that plays that VERY low E relaying the actual hour.) There are two possible explanations for the bell’s “Ben” roots: It could have been named after Sir Benjamin Hall, the First Commissioner of Works, who was a tall man and known in the House of Commons as Big Ben. Some feel it may have been named after a champion heavyweight boxer Ben Caunt. He fought his last fight in 1857 that was indeed the very year that it was being decided what to call the massive bell. Both gentlemen would be surprised to know that short stacks of old-school pennies are part of the timekeeping secret of the 150-year-old clock—pennies are either added or removed from the pendulum to achieve perfect weight and balance. Adding one penny causes the clock to gain two-fifths of a second in 24 hours.

Chiming bells are controlled in various ways, whether teams of people pulling ropes or automatic mechanisms involving pulleys, weights and cogs, etc. However, the most sophisticated performance-oriented tower bell system is the carillon, dating back to 1510 in Flanders. This is the original heavy metal music! These instruments only exist in grand cities—but a welcome and rare novelty is the traveling carillon. There have been three traveling carillons in the United States in recent memory. The largest one still rings out, but no longer travels, as it retired to a more sedentary life in sunny Florida. It was on April 20, 2019, the Chime Master Mobile Millennium Carillon officially changed ownership to become the Andrew W. Crawford Memorial Carillon. It now resides at a fixed site at the main entrance of the Venice Performing Arts Center in Venice, Florida. It toured for over a dozen years as the Royal Eijsbouts Traveling Carillon.

This set of commuting bells was originally cast in Asten, the Netherlands, at the Royal Eijsbouts bell foundry in 1991 and completed in 1992. The 48 bells were mounted in a traveling trailer and toured Europe as the Eijsbouts Traveling Carillon for several years before being sold to Chime Master in 2007. Re-christened as the Chime Master Mobile Millennium Carillon, the instrument toured at Renaissance fairs, churches, botanical gardens, and universities throughout the United States and Canada. The four-octave instrument has 48 bells with the largest being a 2000-pound, 46-inch diameter Bourdon bell tuned to F natural. The full weight of the carillon is 26,000 pounds.

As a loyal UC San Diego alumnus, I would be in remiss by not relaying further details about the UC San Diego campus carillon:

Yes, there really are chimes atop Geisel Library. (It’s not a recording!)
Those acoustic chimes are amplified to sound like huge hanging bells.
You don’t really want to sit under a one-ton bell in earthquake country…

UC San Diego’s campus carillon first rang out on Sept 21, 1989 with some pre-programmed songs (a computer-programmed, player-piano mode) in a ceremony for the carillon donor, longtime educational patron Joe Rubinger. I wanted to start a song-request series and was able to get permission to start playing the carillon “live” on the roof of Geisel around 1992. To do this, I climb up to the top of the Library and go into a small rooftop structure that houses the chimes. In that little bunker there is a small, three-octave, piano-like keyboard. That’s where I sit to fulfill requests.

The Library chimes recently celebrated a 30th anniversary. I asked for extra song requests to mark the 30th and I’m more than 40 songs behind right now—but I promise that I’ll catch up with all those requests soon when the Library re-opens. Requestors: I haven’t forgotten you!

For several years, the number#1 requested song has been “Stairway to Heaven” and I never get tired of playing it.

I particularly enjoy performing on Joe Rubinger’s birthday (June 1). He insisted that our campus should have clock chimes playing lively song requests and I am glad to make sure he gets his way! We often commission student composers to write new works for our chimes and we premiere them on Joe’s birthday.

The only time the bells fell silent was the year Joe Rubinger died (at 103!!!). Joe specifically stated that no memorial service should be held, but his colleagues insisted on hosting one, featuring Joe’s favorite songs from the carillon. I reluctantly played, but the next day the instrument fell mysteriously silent and technicians from the Maas-Rowe Carillon Company had to be called in to trouble-shoot. Many of us feel this sudden silence was spirited revenge from Joe for disobeying him. He obviously forgave us, because the chimes never again failed after that incident. Lesson learned: don’t mess with Joe.

As an alumnus and an employee, I’m proud to make sure that Joe’s gift to the campus is utilized and I look forward to resuming noontime concerts.

One more January ritual that I enjoy: binge-watching films with bell-tower action!

Orson Welles’ 1946 film, The Stranger, features a climactic death in a spectacular animated glockenspiel town clock: a winged satanic statue is pursued by a revolving bronze swordsman in the top display balcony, and when the clock goes awry, the protagonist dies.

In 1953’s Niagara, Marilyn Monroe sends musically-coded messages to her illicit lover via song requests on the famous carillon of Niagara Falls. (Note: if you’re being pursued by a killer at The Falls, don’t hide in the top of the carillon tower!)

My favorite silent films that involve bell-tower intrigue: the 1923 The Hunchback of Notre Dame with Lon Chaney doing amazing acrobatic acts on the bells; the 1916 Pearl of Paradise, which featured a plummet from our very own Balboa Park bell tower; and, of course, the 1914 version of Charles Dicken’s The Chimes, where the bells come to life, offering advice. I really should do an outdoor silent film concert featuring those films at a locale with chimes!

Heed the Harp! Profess Your Love!