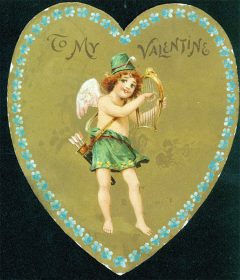 I’m so lucky to have a monthly column here at the San Diego Troubadour! It’s the month of February and on Valentine’s Day, I’ll officially profess my love for Liz Abbott, editor of this very wonderful music tabloid. Hang in there, Liz! You’ve been doing a great job keeping musical dreams alive during the Pandemic. And Liz: thank you for putting up with my too-many-hyphens, my plethora of (unnecessary) parentheses, and I thank you for putting up with my semi-colons; semi-colons need better representation!

I’ll represent for love this month and heed the harp—there is extra love in the air in February, so I’m playing extra harp to help move it around. The official Harpist of the Month is Cupid, though. He travels with a tiny harp but we usually see him with his bow and arrow in hand…there is an official connection here: the first harps were actually a hunter’s/archer’s bow; the taut string of that bow could easily play various notes with minimal manipulation. Various versions of an archer’s-style harp are seen from Appalachia to Africa.

An excellent example of a hybrid jaw harp and bow harp was re-popularized by Buffy Saint Marie in the 1960s and she’s still going strong!

My favorite biblical harpist is David. Little-known fact: harpists have strong arms and either arm can take you down in a fight, as the nature of harp practice leads to equally strong, equally flexible right and left arms! So, watch out. Yes, young David was a onetime battlefield hero who felled Goliath with a vicious, swirling either-arm slingshot, but his full-time job was playing healing harp for a king, mostly at mealtimes, to encourage an appetite.

Speaking of mealtime harp, popular local harpist Chiara Capobianco is playing at the Green Door Café in La Jolla this Valentine’s day…check with her here about that:

I’ll probably opt for take-out on that Feb 14 date and briefly hover nearby to drop something in Chiara’s tip jar.

Another harpist I love is healing harpist Susan Raimond:
http://www.gracefuldeparture.com/about/susan-raimond/

Her harp-playing can sooth! She played at a UC San Diego Library event of mine some years back, and people floated away better-off than when they had arrived. She’s famous for harp-managing animal behavioral problems at zoos and elsewhere.
Pain clinics sometimes employ healing harpists, whose live performances often result in patients’ welcome reduction of pain medication dosages.

But, if you need to self-medicate, harpists everywhere agree that there is no Harp Beer without a harp.

My strongest childhood harp memories are of Harpo Marx. How great to have YouTube access to so many of his film and television appearances now! 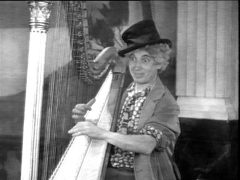 His beautiful playing was such a surprising contrast to his very-welcome slapstick antics. Harpo’s mother gifted him a harp when he was in his twenties and told him to learn it. He taught himself how to play in an effective, showy, glissando-laden style…all while nestling his harp on the wrong shoulder and tuning the instrument incorrectly. Later, esteemed harpist Mildred Dilling helped him correct some bad habits…and there were also some mini-lessons conducted over the phone between the two (take heed, modern-day Skyping learners—this is how it began!) Harpo’s playing improved from film to film and from decade to decade. His later Mercury albums from the 1950s are worth a re-visit, especially because he worked with only the best people and they helped raise his game. He was always honest about his limitations, but I am a fan and everyone can agree that Harpo was a tremendous ambassador for the harp.

A favorite harpist from my youth, when the Boston Symphony Orchestra was my closest visit-able major symphony orchestra, is Ann Hobson Pilot. She also spent a bit of time in my home state, when she studied and resided at the Maine Harp Colony. I still adore her: 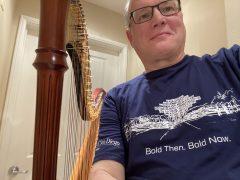 Jazz harpist Dorothy Ashby is also on my playlist this month! She was a sensation when she brought harp into the jazz world in the late 1950s. She’s close to my heart for her work in live radio and experimental theatre, as well. In 1962, she won Downbeat magazine’s critics’ and readers’ awards for best jazz performers. In addition to her 11 solo albums, you can hear her supportive studio gig work on some big 1970s albums from Minnie Riperton, Stevie Wonder, Billy Preston, and others.

Finally, my favorite movie harpist appears in a 1966 James Coburn Our Man Flynt spy film scene…as much as I love harps, I need to remind to watch out for harpists! Cupid’s aim can take you down!