January 2023
Vol. 22, No. 4
Noel Paul Stookey: There Is Love (with a capital L) by J.T. MoringMarch 2019
Examining Bob Dylan’s Love Sick Blues by Ted BurkeMarch 2019
John Densmore: An Invitation to Dance on Fire by Terry RolandMarch 2019
A Father’s Day Story: The Courtship of Harry Nilsson’s Son, Zak by Terry Paul RolandMarch 2019
Jazz 88 Keeps Pumping Out the Tunes: Station persists despite numerous challenges over the years, including Coronavirus by Michael J. Williams and Jim TrageserMarch 2019
Me and Ronnie Earl by Eric LiebermanMarch 2019
Lawrence Ferlinghetti: America’s Poet by Ted BurkeMarch 2019
Q & A with Gabe Lapano: After the Rain and Beyond by Andy RasmussenMarch 2019
Remembering Sam Hinton by Paul HomiczMarch 2019
Band of Brothers: The Liggins Brothers by Bart MendozaMarch 2019
Advertisements 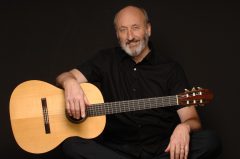 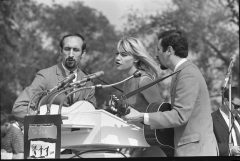 Peter Paul & Mary performing at the March on Washington, 1963.

Take a look at the Billboard Hot 100 songs of 1962 and you will find Ray Charles and Ricky Nelson, Elvis Presley and Roy Orbison, the Everly Brothers and the Isley Brothers, the Kingston Trio and the Beach Boys. That’s the year that Peter, Paul and Mary made the list with “If I Had a Hammer” off their first, eponymous, double-platinum album. Not many artists of that generation are still making vibrant music today, but Noel Paul Stookey is. (His colleague Peter Yarrow also maintains an active concert schedule, sometimes with Noel; Mary Travers passed away in 2009.)

Noel is bringing his solo show to Dizzy’s listening room on March 31. Expect beautiful guitar work; a strong, clear familiar voice; plenty of memorable hits, some solid recent material; and likely a bit of social commentary. If you might be offended by a song called “Impeachable,” you should probably sit near an exit.

Way back when…
For a more detailed chronology of Peter, Paul and Mary, refer to a remarkable 1996 back story by William Ruhlmann, available at peterpaulandmary.com.
Peter, Paul and Mary (PPM) arguably provided the bridge from the traditional folk groups of the 1950s–the Weavers, the Kingston Trio–to the harmony-driven folk-pop of the ’60s, represented by Simon and Garfunkel, the Mamas and the Papas, and the Bee Gees.

PPM came together in the astoundingly fertile Greenwich Village scene. They were the brainchild of the legendary Albert Grossman, to whom Noel is reputed to have first recommended Bob Dylan as “somebody worth watching.” Noel brought a finger-style guitar technique, informed by “the homespun casual style of Arthur Godfrey, the group singing and doo-wop of rhythm & blues by the Cadillacs, the mellowness of Bing Crosby, the recording innovations of Les Paul, the semi-classical guitar style of Charlie Byrd, the rapport within the members of the Brubeck Quartet,” but especially by the seven-string jazz guitar work of George Van Eps.

Noel was also was an accomplished stage comedian, “one of the great comedians in New York at the time, who ranked up there with Bill Cosby and Woody Allen” according to Peter Yarrow. He also brought the middle name “Paul,” which made for a more memorable, alliterative band brand.
Noel’s background complemented the more traditional folk repertoire of Peter Yarrow and Mary Travers. Their first album, Peter, Paul and Mary, reached the top of the charts and won two Grammys. Noel wrote or co-wrote six of the 12 songs, including the opening gospel-inspired number “Early in the Morning.” These first recordings are clean and clear, with Noel’s voice and guitar on one side, Peter’s voice and guitar on the other, and Mary’s voice dead center.

Where Mary jokingly (?) accused Noel of “constantly trying to sneak in some jazz chord,” Noel says “if you listen to my harmonies with the trio and/or the guitar parts–even on the traditional folk tunes–you can recognize that I’m trying to add some emotional/musical flavor with “color chords,” which are definitely outside the mainstream folk guitar lexicon.” Listen to “500 Miles” from that first album or their later hit “Leaving on a Jet Plane.” It seems to have worked. The success of their first album set the stage for a remarkable run of music and historic adventures through the pandemonious 1960s.
1963 saw a command performance for JFK and participation in the March on Washington. In 1965 they joined Reverend King for the civil rights march from Selma to Montgomery. They began experimenting with fuller arrangements, and 1967 saw Noel’s lively PPM hit “I Dig Rock ‘n’ Roll Music” and a collaboration with Dave Brubeck. They finished the 1960s strong, working with Cesar Chavez and the United Farm Workers, producing a popular kids’ album, and topping the charts with “Leaving on a Jet Plane.”

Then until now…
Something in the tumult of stardom left Noel searching for deeper meaning. At the suggestion of Bob Dylan, he began looking for–and finding–answers in the Bible. This led him down a spiritual path he has followed to this day, with a focus on Love. “At one point, I caught that the ‘love’ that the Beatles were singing of might be spelled with a capital L; it was like a glimmering.” He tell us, “Love is the common denominator for the spiritual nature we all (yes, even the atheist) share. That is, Love with a capital L.”

Perhaps not coincidentally, PPM took a hiatus through most of the 1970s. Peter got married in 1971, with Noel as best man and author of a personalized wedding present, the iconic “Wedding Song (There Is Love).” If only we all had such a best man! This song has a Leonard Cohen-like melodic simplicity, performed in Noel’s authentic, expressive voice, backed by an intricate double finger-picked guitar arrangement. The song charted in 1972 and has remained popular ever since.

Noel proactively established a nonprofit foundation to put all the income from “Wedding Song” to work for positive causes. He tells us that the Public Domain Foundation was “initially set up to disburse funds created by the “Wedding Song,” and two million dollars of sharing the wealth has begun to support, in particular, Music to Life (musictolife.org), an organization created by my daughter Liz and dedicated to the musical activist artist.”

In the late 1970s, Peter, Paul and Mary picked up where they left off, writing, performing, and advocating for social justice. In the 1980s, they shone a light on the tragic results of USA’s Central American policies, the results of which are haunting the region (and indirectly our immigration situation) today.

In 1995, the PPM Lifelines album brought together three generations
of folk musicians, including Pete Seeger and BB King, Emmylou Harris and Richie Havens, and Buddy Mondlock and Sally Fingerett. And, up until 2009, the year of Mary’s death and PPM’s induction into the Hit Parade Hall of Fame, the group continued to tour such notable venues as Carnegie Hall.
Noel continues to tour, record, and poke his nose into political, social, and spiritual matters. The aforementioned Liz is one of Noel’s three daughters with Betty Stookey, his wife since 1963. Betty is a chaplain and Noel’s partner in One Light, Many Candles. This multifaith program reflects “expressions of the Divine from a myriad of spiritual leaders and from literature of many cultures” and “shifts dynamically from the spoken word to the sung word and back again,” with Betty reading and Noel singing.

In January 2019, Noel sang his version of “America the Beautiful,” including two verses he wrote to bring modern sensibilities to that esteemed song, at the inauguration of his home-state Maine governor, Janet Mills. Noel’s latest recordings on his Newworld Media label include a 2018 holiday album and a 2017 four-song EP called Summerfallwinterspring. The latter includes two biting political commentaries, “I Will Stand” and “Impeachable,” the latter sung to the tune of Nat King Cole’s Unforgettable.

Dizzy’s
Like his contemporary and fellow east-coaster Happy Traum, who generally graces us southlanders with an annual concert, Noel makes a regular winter pilgrimage to Southern California. He approached Chuck Perrin about playing at Dizzy’s and found a receptive ear. Chuck counts Noel’s guitar work as an early influence on his own music, with the second PPM album on his “desert island” list. Noel’s jazz sensibilities will hopefully generate a good draw for the predominately jazz-centric club, but Chuck notes that this show is consistent with his history of hosting quality acoustic groups (e.g., Berkley Hart) outside the strict jazz idiom.

Assuming stars align, maybe Noel Paul Stookey will make San Diego part of his yearly performance schedule. But that’s not guaranteed, so if you want to be sure to share the Love, you’d better catch him at Dizzy’s on the last day of this month. Note the afternoon show time.

Wedding Song (There Is Love)
1971 Noel Paul Stookey
He is now to be among you at the calling of your hearts
Rest assured this troubadour is acting on His part
The union of your spirits here has caused Him to remain
For whenever two or more of you are gathered in His name
There is love, there is love

America the Beautiful
New verses 2011, Noel Paul Stookey
Oh, nation of the immigrant
The slave and native son
Whose loyal families labor still
That we may live as one
America, America
Renew thy founder’s call
Let liberty and justice be
The right of one and all
Oh bountiful of forest green,
Of lake and fertile lands
Where seeds of hope are tended by
Thy sons and daughters hands
America, America
The earth still calls to thee
Where human life and nature strive
To live in harmony

Impeachable
2017 lyrics by Noel Paul Stookey
Impeachable…
That’s what you are
And you go away
You may have thought
You were unreachable
But history makes
Some moments “teachable”
Someday Pence may be
Impeachable too.

Jorma Kaukonen–Been So Long: My Life and Music