January 2023
Vol. 22, No. 4
100 Candles for PETE SEEGER by J.T. MoringApril 2019
Examining Bob Dylan’s Love Sick Blues by Ted BurkeApril 2019
John Densmore: An Invitation to Dance on Fire by Terry RolandApril 2019
A Father’s Day Story: The Courtship of Harry Nilsson’s Son, Zak by Terry Paul RolandApril 2019
Jazz 88 Keeps Pumping Out the Tunes: Station persists despite numerous challenges over the years, including Coronavirus by Michael J. Williams and Jim TrageserApril 2019
Me and Ronnie Earl by Eric LiebermanApril 2019
Lawrence Ferlinghetti: America’s Poet by Ted BurkeApril 2019
Q & A with Gabe Lapano: After the Rain and Beyond by Andy RasmussenApril 2019
Remembering Sam Hinton by Paul HomiczApril 2019
Band of Brothers: The Liggins Brothers by Bart MendozaApril 2019
Advertisements 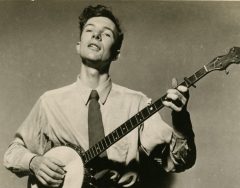 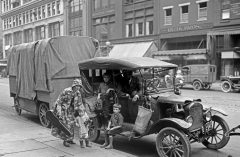 Seeger family on the road, 1922. Pete is standing next to his mother. 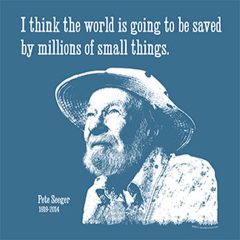 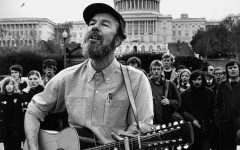 Seeger at the March on Washington, 1963. 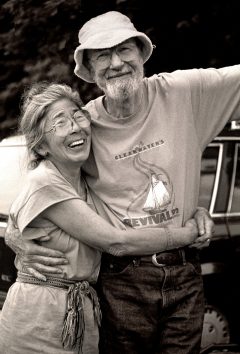 Seeger with his wife, Toshi, in their later years. 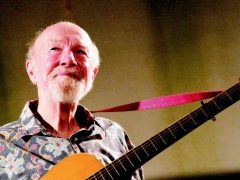 If we were to choose one person to represent North American folk music, the obvious choice is Pete Seeger (1919–2014). He brought songs out of the hills and onto the airwaves, engaged continuously with the public—from lowest to highest—and embodied the social consciousness of folk music in the labor, civil rights, pro-peace, and environmental movements, taking time along the way to write a collection of enduring songs.
His activities are so sweeping that a summary of them in this short space could only cast a dim shadow of the man. Instead, I’ve chosen a few of the pivotal moments in his life to try and illustrate his significance. Read the Wikipedia entry for the broad overview of Pete’s accomplishments, which are many. (He stood up to the McCarthyites, wrote “If I Had a Hammer,” cleaned up the Hudson River, and we haven’t even started on his banjo!) For more depth, there are a number of biographies available, including several very accessible ones in your library. The documentary Pete Seeger: The Power of Song is a good watch. And there is an almost endless supply of Pete Seeger recordings (and books!) if you start looking. Let’s go…

1922: First Tour
When Pete was just a toddler, his family set off on an ambitious road trip. His dad had built a Model T-pulled trailer, which served as both a performance stage and a sleeping platform for the parents and three kids. Both Seeger parents were professional musicians; the idea was to head into the rural South to expose the locals to the beauty of classical music, on pump organ and violin. After several months, Pete remembers, “My father said he finally realized that these people had a lot of good music of their own” and weren’t all that interested in being elevated by some New Yorkers. The trip was a “disaster” but foreshadowed Pete’s later musical odysseys.

It also augured his parents’ breakup, which came a few years later. Pete spent most of his youth away at boarding schools, though he had summers to play Indians in his grandparents’ woods and to take lower-key music expeditions with his father. It was on one of those trips to North Carolina, where Pete, already familiar with ukulele and four-string banjo, fell in love with the five-string banjo, which would be his signature instrument.

1939: Library of Congress
At about age 20, Pete was living in New York, involved with the labor movement, and starting to perform at benefits and such. It was there he first met and shared the stage with Woody Guthrie, then 27. When Woody was invited to make some recordings for John and Alan Lomax for their epic Library of Congress folk music collection, Pete went along. His father was a colleague of John Lomax, and Pete ended up staying on as an assistant to John.

Pete’s assignment was to pore through collected folk songs, sorting out the keepers for the permanent collection. “I started learning American history out of songs,” he said, diving into the work with a passion, developing a catalog that would serve him the rest of his life. If it weren’t for the work of the Lomax-Seeger team, such songs as “House of the Rising Sun” might not have become the standards we know today.

The Lomax recording session was not the end of Pete’s dealing with Woody, either. “I went out west with Woody. He taught me how to sing in saloons, how to hitch-hike, how to ride freight trains.” They performed together on the road and then back east with the Almanac Singers, which Woody Guthrie declared “pretty good for a group that practices on stage.”

1949: A House on the Hill
Toshi Aline Ohta was the daughter of an exiled Japanese Marxist and an American who met in Germany. She first encountered Pete at a square dance in New York in 1939, and the two were married when Pete was on leave from the Army in 1943. After the war, with two young children, the family decided to get out of the city and scraped together the money for 17 wooded acres overlooking the Hudson River, 60 miles north near Beacon, NY.

Needing shelter, Pete read up on log cabins in the public library, got hold of an ax, and started building. He gleaned doors and windows from discard piles at Manhattan demolition sites. Through energy and determination and a willingness to endure hardships along the way, the family eventually had a cozy cabin, but it was several years before they had electricity and running water. Pete maintained a regimen of wood chopping through all his days, reportedly even once surprising his hosts in Africa with an ax carried in his banjo case.

Toshi stayed on as wife, mother, homemaker, organizer, sometime manager, counselor, documentarian, protector, and supporter until her death in 2014. Pete said, “Toshi has been my tower of strength, putting up with my enthusiasms” for this and that. She teased that if only he was a womanizer, she’d have an excuse to dump him.

1965: Newport Folk Festival
There is a story of the legendary day when Bob Dylan “went electric,” that Pete Seeger (one of the show’s organizers) had to be physically restrained from cutting off the electricity with an ax. (Again, the ax!) Here’s the true story, according to Pete.

Dylan was on stage with Paul Butterfield and crew. The amps were warmed up and Bob’s Strat was tuned. Howlin’ Wolf had played electric the day before, without much splash or backlash. Then, when Bob started in, Pete wished he’d brought his ax. “The sound was so distorted you could not understand a word that he was singing. He was singing a great song—“Maggie’s Farm”—a great song!” That comment got distorted [sorry!] into the apocryphal tale of the crazed axman. Pete, who was such a cornerstone of the ’60s folk scene, continued to hold Dylan in high regard: “He and Woody and Buffy St. Marie and Joni Mitchell and Malvina Richards [look them up!] are the greatest songwriters of the 20th century.”

1967: Smother Brothers
Pete Seeger and the Weavers had a number one hit in 1950 with “Goodnight Irene” (learned from Leadbelly in Pete’s Library of Congress days), but not long afterward, their career was derailed by the Red Scare blacklist. Pete’s courageous testimony before the House on Un-American Activities Committee is worth a read.

Between court appearances (he was convicted of contempt of Congress in 1961, and exonerated in 1962) Pete kept a busy schedule performing at schools and camps and such, but was prevented from major live or broadcast appearances. He and Toshi did take the family on a 22-country “world tour,” and filmed 30-some episodes of Rainbow Quest, featuring guests such as June Carter and Johnny Cash, Doc Watson, Reverend Gary Davis, and Judy Collins, which are worth watching on YouTube.

The Smothers Brothers broke the blacklist by inviting Pete to sing three songs on their popular variety show. Even then, CBS cut Pete’s newest, the anti-war song “Waist Deep in the Big Muddy,” but bowed to popular demand and allowed him back to sing it the next year.

1992: San Diego “Labor of Love” Concert
Here’s just one example of the thousands of concerts Pete performed at over the years. Pete came to town to help celebrate the 88th (and last) birthday of old friend, songwriter, laborer, and labor advocate John Handcox at the Laborers’ International Hall. Other performers included Sam Hinton, Peggy Watson, and Joe Glazer; at least one clip is up on YouTube.

Peggy remembers Pete as gracious but not given to small talk, as if his mind was focused on bigger thoughts. During Pete’s time on stage he inspired everyone present to sing, called up “every guitar player in the house,” and took time to teach the audience different harmony parts.

2006: We Shall Overcome: The Seeger Sessions
It’s hard to find parallels between the careers of Bruce Springsteen and Pete Seeger (in fact Seeger said, “I don’t think of myself as having a career; frankly, I don’t even like the word”), but they both have an undeniable affinity for the salt of the earth. Springsteen describes how he “…went to the record store and bought every Pete record they had… I heard a hundred voices in those songs, and stories from across the span of American history—parlor music, church music, tavern music, street and gutter music—I felt the connection almost intuitively.” He pulled 13 songs form those hundreds, gave them a full-band treatment, and took home a Traditional Folk Album Grammy and gold record in the process.

Seeger, never one to seek the spotlight, said, “I wish he hadn’t used my name.” But a couple of years later, Pete would win the same Grammy category for his At 89 album.

2019: One Hundred Years
By all reports, Pete Seeger was an exemplary man. His achievements were impressive, realized through his tireless work and his infectious enthusiasm. Except for those that disagreed with his political direction, it’s near impossible to find anyone that has anything bad to say about the man who has no “warts and all” in his biographies!

One scene from the Power of Song film gives us a hint of Pete’s focus, and how much that focus was enabled by his wife. He and Toshi were walking hand-in-hand through Greenwich Village, where they lived before moving upstate. Toshi noted that she would take the babies out to Washington Square every morning at 5am so they would not wake up Pete, who was just getting home from some hootenanny or other. Pete muses, “I hadn’t thought of that!”

The San Diego music community is putting on a couple of celebrations for Pete’s 100th birthday in May. Come on out and bring your singing voice. You’ll recognize the songs.

Iconoclasts: The Ballad of Phil Ochs

Noel Paul Stookey: There Is Love (with a capital L)