Tom Waits has a couple of new CDs out and in spots he still sounds like the old Tom I remember from our days at the old Heritage Coffee House on Mission Blvd. in Mission Beach. I was running the Wednesday Night Hoots (that’s Hootenanny) the first time Tom came in and played some time during the late 1960s. It seems to me he was singing Bob Dylan songs, but I might be mixing him up with someone else. At any rate, I saw him several times during that time and got to know him a good bit. I can’t say that I noticed his music much until he started writing his own songs. I don’t even remember when he played his first weekend, but it wasn’t too long before he did, and when Bob Webb took over ownership of the Heritage from long-time owner Bill Nunn, Tom became the doorman and official greeter. Sometimes, late at night after the Heritage closed, a bunch of us, including Tom, Ray Bierl, Wayne Stromberg, Tom Presley, Pam Ostergren, and sometimes Virginia and myself would drift down Mission Blvd. to Saska’s Steak House for hamburgers and joke-swapping sessions (mostly led by Tom and Ray Bierl). I was enough marked by those times that a few years later, when both Tom and Ray played at a San Diego Folk Festival that we had a dirty joke workshop (it’s all folklore, folks) that both Tom and Ray took part in.
Tom Waits and Jack Tempchin’s “Tijuana,” recorded at by Lou Curtiss at Folk Arts Rare Records, November 16, 1973. 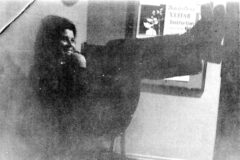 During the final years of the Heritage (probably San Diego’s best coffee house ever in its prime) that Tom started taking Monday nights off to go up to L.A.’s Troubadour Club (on Wilshire) to play the hoots there. It was mostly L.A. regulars who played on those nights. Often well-known artists would come by to try out new material, and first-timers or unknowns might get a chance to play at about 1 a.m. on Tuesday morning if they hit L.A. and got in line about noon on Monday. Tom kept trying and eventually got to play. Someone saw him and he made a record, then began touring, first as an opening act for Charlie Rich (in his “Mohair Sam” days) and then with Frank Zappa. When I was doing concerts at Folk Arts, Tom played a couple of dates for me (November 16, 1973 and January 11, 1974). Former Heritage owner and guitarist Bob Webb played on the bill with Tom, sometimes backing him on several numbers (Bob did a couple of early tours with Tom and played guitar). Tom also performed at the 1974 Folk Festival for me. (That was the eighth one. It’d sure be nice to get him back for Number 30 next April). By the way, these festivals are now called the Adams Ave. Roots Festivals). At any rate, Tom sort of moved out of San Diego and most of the P.R. around today lists him as being from Los Angeles, but those of us who hung around the Heritage or Folk Arts for that matter know differently. By the way, it was the November 16th concert at Folk Arts that Tom invited Jack Tempchin up out of the audience to play a new song they had written together that afternoon called “Tijuana,” which Tom later put on an album. That same afternoon Jack wrote “Folk Arts Baby,” a singing commercial for my store and probably his most obscure song. I still have the words in his hand writing. Neither Jack nor Tom made a record of this song, but I’m willing to state under oath that I heard Jack sing it. Now, maybe someone who wrote “Peaceful, Easy Feeling” might not want to admit to “Folk Arts Baby” and that’s okay. Besides, this was supposed to be an article about Tom and possibly about his new CDs, which contain light-hearted little ditties about death, mayhem, and destruction. Titled Alice and Blood Money, both CDs come off sounding like Brecht-Weill stage musicals, which is basically what Tom intended them to sound like. You can tell by listening to this stuff that the world has leaned on Tom a little more, and those songs about fast cars and Saturday nights have gotten a lot more complex. Hopefully, those of us who listened to those early songs will listen to these as well and get even more out of them.
Recordially,
Lou Curtiss
Reprinted from July 2002, San Diego Troubadour.

Evolution of a Song

Me as a Radio Host