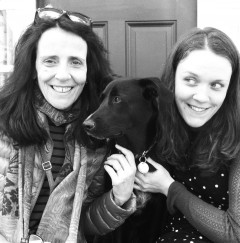 Lucy and her mom, Suzzy Roche

It had to be daunting, being born into a family and given a last name that is hyphenated with Wainwright and Roche. Such is life for Lucy Wainwright Roche. Today, she carries both names well. Her pedigree lies just beneath the surface of the great quilt of American song and artists. But, she wants one thing to be clear: her work in songs and words stands on its own. She possesses a voice as clear as rainwater; she writes insightful, introspective poetic lyrics, and spare, simple melodies that linger in the listener’s mind long after the music has stopped. She stands today ready, as an artist, to create her own legacy. She is at once, as demonstrated by her latest album, There’s a Last Time for Everything, a distinctive writer, vocalist and, recording artist with a vision of life within in the soul that calls to mind Joni Mitchell and Ani DiFranco.

But, the time for her music career to begin was not an easy birth. Actually, she reports a degree of embarrassment about becoming involved in the family business. “I was surrounded by them all,” she told NPR in a recent interview. “It seemed like a terrible plan.” Often, with artists, the very sensitivity that makes them who they are, is the first obstacle to overcome, especially when it comes to live performance. In Lucy’s case this may have been so true, it might have stalled her career until she had a major revelation about audience and intimacy.

Her first shows she describes as “terrible, awkward, horrible disasters.” Then, she said, during the same NPR interview, “About halfway through [the second show] I realized I should just be the way I would be if I was just talking to one person. That solved the problem. Then I was like, ‘Oh, I’m not really building the mystique. I’m just sort of being normal. And that helped because I’m not much of a mystique builder.”

It’s one thing to overcome initial shyness and high expectations when one or both of your parents have successful careers in the music. But, Lucy has siblings to contend with as well. Loudon Wainwright III has been well-known as a prolific singer-writer for the last 40 years. He was considered one of the “new Dylans” during the singer-songwriter movement of the early ’70s. He’s best known for his novelty hit “Dead Skunk in the Middle of the Road.” Lucy’s mother, Suzzy Roche is one third of the pioneering harmony-driven band, the Roches, who influenced artists like the Indigo Sisters. Her half-sister, Martha Wainwright, is a fine independent singer-songwriter, while her half-brother, Rufus, is a legendary pop vocalist.

But, it would have been worse than shame for her voice, as a writer and performer, to get lost in this crowded room of talent and success. Her voice is silky and appealing, and she sings with a vulnerability that is unaware and uncalculated. Her writing is precise with lyrics that are gentle but always honest. Her studio presence is warm and fills the songs she writes with a kind of unique nuance.

A look at her professional resume of a decade ago wouldn’t suggest that she was ready for a launch into the uncertain world of the singer-songwriter, even if it is the family business. Born and raised in Greenwich Village, she attended college in Ohio and earned a degree in creative writing in 2003. She earned a master’s degree in education in New York. No music credentials there. No indications of a musical future. It appeared she was to take a pass on the family business.

After a few years of teaching elementary school she finally, in 2007, decided to take on a career in music. Her first EP came out the same year, titled 8 Songs. The melancholy “Saddest Song” was chosen for the television show “Lipstick Jungle.” The next year she would release 8 More, which included a duet with actress Martha Plimpton on the well-known Bruce Springsteen song “Hungry Heart.”

After a short stint touring as a back-up singer for her brother, Rufus, she would open for acts like the Indigo Girls, Dar Williams, Neko Case, and, of course, for her father Loudon and brother Rufus.

In 2009 her song, “Snare Drum,” from the 8 Songs EP, won the 8th Annual Independent Music Awards in the Best Folk Singer-Songwriter Song category. She was also one of the recipients for the Emerging Artist category at the Falcon Ridge Festival competition. In 2009 she was among the winners at the Grassy Hill Kerrville Folk Festival’s “New Folk Singer/Songwriter Competition.”

With the 2010 release of her first full length album, Lucy’s place among up and coming singer-songwriters was solidified. The album received full support from her family with father Loudon and mother Suzzy appearing along with the Roches. In a subtle nod to her mother’s origins, Suzzy covered the Simon and Garfunkel song, “America.” The Roche sisters received their first break in the recording industry when Paul Simon hired them to appear on his 1973 album, There Goes Rhymin’ Simon. The album also included a bonus cover of Elliot Smith’s “Say Yes.”

But, it’s 2013’s There’s a Last Time for Everything, that presents Roche with a career breakthrough. It’s a stand-out album of distinct, melodic fusion pop-folk with a haunting feel that draws the listener in with an elegantly layered production, introspective lyrics, and a trance-like vocal performance form Roche. From the opening Celtic-like “The Year Will End Again” to the stripped down “Under the Gun” there is a sense of creative urgency in each song, leaving the impression that the artist has something to say to us, a story to tell, a feeling to relay, something that will bring us closer together as people, as friends and lovers. This is the real gift of this album, this sense of quiet urgency, that there is something more for us all to reach for in the individual moments of our lives. This is the glowing aftertaste of the sonic experience of this album. It is the added dimension of soul and feeling to each song that gives them a life of their own.

This is no better demonstrated than when Roche takes a famous pop-dance song by Robyn, “Call Your Girlfriend,” and turns a rhythmically driven pop tune into a lyric-focused song about the longing and sometimes deception found in relationships today. Would-be trivial lyrics are turned into something of poignancy when she sings lines like, “tell her the only way her heart will mend is when she learns to love again,” even with the obvious ulterior motives of the narrator. Rather than coming from a “bad-girl-on-the-dance floor,” of the original version, Roche’s take with a simple acoustic guitar and barely audible background drum, turns the narrator into a warm-by-the-fire-girl of endless sensuous wisdom and desire. It’s far more alluring than the more popular version of the song. Rather than making us want to simply get up and dance; this version makes us want to go out and fall in love. Therein may lie the difference between good and great pop music.

The song “A Quiet Line” features a beautiful complementary background vocal by Mary Chapin Carpenter. “Canterbury Song” modernizes an English ballad form and tells the story of escape and love lost. On one of the most engaging productions on the album, The Same, she uses spare rhythmic instrumentation with vocal reverb that dances alongside the instruments, then weaves in, out, and through in a trance-like fashion. “Take What You’re Given” is a imaginative ballad of a haunting journey reminiscent of early Joni Mitchell. The final song, “Under the Gun,” chronicles the end of a relationship, remembering the small things said and done in the beginning asking “what do people under the gun do,” when making simple but vital choices in their lives. The spare instrumentation and production add to the sense of melancholy that sits with tension alongside the urgency.

If Lucy Wainwright Roche’s objective was to define her own artistic identity apart from her famous family, she may have hinted at it on earlier releases. With There’s a Last Time for Everything, her voice rings clear and true, speaking of her own mark, her own imagination and creativity. This album deserves to be heard by mainstream pop music fans. It’s the kind that can change lives with its originality, thoughtful approach to the instinct of the song, and its modern production. The same can easily be said of Lucy as an artist on the horizon of today’s singer-songwriter movement.

Michael Nesmith: The Rise of the Cosmic Monkee