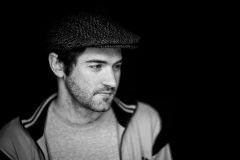 There’s a grandma in South Dakota and she treats me like a star
She tells me she listens to nothing but John Craigie CDs and NPR
She says, “When you gonna get famous, boy, when you gonna shine?”
I say, “The more famous that you get, honey, the worse songs that you write”
–from the song “We Ain’t Leaving This Bar, Patrick (Til We Find You Some Love)”

Apparently John Craigie is not yet too famous, because his songwriting is in top form, as you can hear on his new album No Rain, No Rose, as well as live on stage this month in Encinitas.

n his song “I Almost Stole Some Weed from Todd Snider,” Craigie traces his musical lineage from Johnny Cash via Kris Kristofferson, John Prine, and Todd Snider. All those influences can be heard in Craigie’s work, along with Dylan, Paul Simon, and both Woody and Arlo Guthrie. It is the John Prine comparison, though, that sets the best expectation for Craigie’s work. (Backstory on the weed situation: Snider’s offhand snub and careless treatment of his backstage stash put Craigie in a precarious moral position. Craigie was delivered from temptation by Snider’s road manager, Elvis, and Todd later granted him absolution via a jar of herbal material hand-delivered on stage.)

Both Johns–Prine and Craigie–use simple instrumentation and straightforward vocals as a platform for captivating songs about familiar situations. They leverage keen observations with surprising turns of phrase, maybe a bit of exaggeration, and a natural storyteller’s flair to raise day-to-day experiences to the level of epic encounters. It’s not difficult to hear echoes of Prine’s “Illegal Smile” or Arlo’s Group W Bench in Craigie’s work. Like Prine and Guthrie and Snider, Craigie will mix serious and humorous material into a single song, and his between-song stories are as entertaining as the songs themselves.

John Craigie grew up in LA and has fond memories of family vacations spent on Mission Bay, as a kid, during breaks from Catholic school. He went to UC Santa Cruz to study math, with the expectation of making a career in teaching. But the muse seduced him, and all those math classes now help him calculate his cut of tonight’s door and the miles to tomorrow’s show.

Craigie has had a prolific career. He started releasing albums in the early 2000s, just as Prine’s songwriting was winding down. He now has released ten studio, three live, and two cover albums (one of 90s’ songs and one of acoustic performances of Led Zeppelin tracks). Craigie is a poster-child indie musician; all the albums were produced on his own label.

Craigie put down roots in Portland in 2015. “I had been living strictly on the road for three years. No permanent home. I would stop in Portland often because of the music scene and many of my friends had moved there. Shook Twins were a big part of that move for me. It feels like something historic is happening in Portland right now … some really amazing art and culture is going on.”

Craigie has become backstage buddies with former San Diegan and altar boy Steve Poltz. Steve “is an amazing storyteller and I am a huge fan of that. But he is also fearless up there. He takes every chance, takes all the risks. He’s a huge inspiration to the songwriter scene.”

Craigie has obviously had some serious inspiration. He’s got solid guitar licks, better than average harmonica chops, and he doesn’t limit himself to the three chords that drive so many Woody Guthrie and John Prine songs. Neither is he constrained to traditional folk topics. His songs “Naked Skype” and “Don’t Go Looking at the Pictures on My Phone” reflect issues that were non-existent a generation ago. “Let’s Talk This Over When We’re Sober, and Not at Burning Man” could be a Hank Williams title, had Hank been born 60 years later.

Craigie not only lapses into storytelling between songs, he is also comfortable transitioning back and forth between singing and almost-talking within a song. He allows songs to find their own structures. Some don’t need a verse-chorus sequence; some don’t even need a consistent rhythm.

Craigie is still collecting inspiration. “My best resource is listening to other people’s music. When I’m home in Portland, I listen to vinyl through my day. When I’m on the road, Spotify is my friend. I am constantly eating up all I can get. I like exploring the ‘similar artists’ button. Helps me get into more people that are in the groove I am in at that moment.”

Most of Craigie’s songs spring directly from experiences on the road, and many of them have specific geographical connections. His songs include “Barefoot in Santa Cruz,” “Tacoma,” “Chapel Hill,” “Boston in November,” “Bisbee,” “Catalina,” and “Coldest Colorado.” Craigie has toured internationally and all 50 states, but retains his West Coast identity.

“Touring is where I get most of my ideas. It’s when I’m off the road that I hit a slump. For me, the songs need to be about something. Lyrics that people can relate to. Stories about my adventures, or somebody else’s that I meet that seems relatable. Nobody wants to hear about me cooking stir fry or listening to old vinyl. Being solo on the road means I have lots of time to work out those songs and stories that happen to me while I’m out there.”

No Rain, No Rose

So why do I worry, I’m supposed to be lost
Like some floating ember at a brand new Pentecost
We need the bad things to make the good things, I know
And I hear them singing: no rain, no rose
–from the song “Virgin Guitar”

The new album reflects Craigie’s Portland residency. The title itself, No Rain, No Rose, is an acknowledgement that the City of Roses’ moniker is directly related to its notorious dampness. The Shook Twins–Katelyn and Laurie–and their bassist Niko Daoussis all contribute to the new album, as do several other staples of the robust Portland Americana scene.

The album cover depicts the old house where the tracks were recorded, with a front yard full of garage sale furniture and musicians. The effect conjures Dylan, Big Pink, and the Basement Tapes. In fact, if you look closely, the yard-sale miscellany includes The Band LP. It also includes Will the Circle Be Unbroken, the 1972 Nitty Gritty Dirt Band compilation album featuring Doc Watson, Maybelle Carter, and others. Like Circle (and some Jerry Garcia/ David Grisman recordings), No Rain includes casual inter-song banter picked up live in the studio. A Craigie recording session sounds like a lot of fun!

The album has an overall mellow vibe, and the arrangements will translate well to solo performances. Most songs are acoustic guitar based, with perhaps some vocal backup, single-note piano, or fiddle fills. Bass, mandolin, a little banjo, and limited percussion provide varied sonic textures. Craigie’s harmonica builds a bridge to his live solo shows.

This album is a stellar example of lyric-based modern folk, with enough impeccable instrumentation to build expectations from one song to the next. Like radio bands Mumford and Sons or the Avett Brothers, Craigie has used traditional instruments to create arrangements that owe their sound to the American folk catalog filtered through millennial pop. However, this record is not calculated for pop radio. The first four songs include some memorable refrains (especially the up-tempo “Broken” and the catchy but lyrically uncomfortable “Rough Johns”) and nice instrumental hooks (“Virgin Guitar,” “Highway Blood”), but no real chorus.

The slow, minor-chord “Savannah” uses subtle backing vocals and sustained slide guitar to nail its feel. “Bucket List Grandmas” is a full-on rocker, with tinkling piano and distorted guitar–a three-minute overview of the life and times of a traveling musician (“I been singin’ to these hipsters, they ain’t singin’ back”). Here he does confess to stealing a “bunch of shit” from Blaze Foley, so apparently the Todd Snider episode was not an isolated incident. Musicians beware!

No Rain, No Rose includes one cover, a laid-back acoustic version of the Stones’ “Tumbling Dice” that really opens the song up and lets it breathe. Slowing the song down a little and stripping out the drums and electric guitar allow the lyrics and harmonies to come through; Mick and Keith would approve. Then there’s a NASA-inspired singalong bluegrass tune (remember the Byrds’ “Mr. Spaceman”?) about Michael Collins, who drove the getaway craft for the first moon walkers: “One small step for man, Jesus, Goddamn! Twenty-two hours hanging in the air. Sometimes you take the fame, sometimes you sit backstage, but if it weren’t for me them boys would still be there.”

“Live With Less” sounds like a classic from the Woody Guthrie/Mermaid Avenue catalog, complemented by slide guitar and harmonica, with a dog barking faintly in the background.
The album’s standout song is “I Am California,” a minor-key waltz-time anthem starting off with the unforgettable line “You tried to drown your sorrows; shouldn’t have taught them how to swim” and featuring an enduring chorus. Running over five minutes, it may not be a radio hit, but it is as memorable as any song you are likely to hear this year.

Gear piled high in the back seat
You were riding shotgun next to me
Hell, we could have been Kerouac and Cassidy
If it weren’t for the Cliff bars and the cell phones and the sobriety
–from the song “Suck it Philly”

John Craigie’s summer schedule includes a series of festivals and a mini tour with Jack Johnson. In April alone, he will perform in Washington, Idaho, Illinois, Minnesota, Iowa, and California. Despite touring more or less nonstop for the last 15 years, he’s only played San Diego twice, and who knows when he’ll be back. So get it while you can–San Diego Folk Heritage brings him to Encinitas on April 28. JT Moring, whose songwriting has in no way been corrupted by fame, opens.

John York and the Legacy of the Byrds