Someone suggested to me that I get one of those t-shirts that reads “I may be old but I got to see all the good bands.” Well that may be so, but the problem with that shirt is the electric V shaped Electric Guitar on it. It should be a Mosrite double-necked electric with the name Joe Maphis written on it, or maybe it should be a couple of fiddles and an accordion, or maybe a electric steel along with a swinging fiddle section, or a band with horns and vibes. Lots of choices. I got to see a lot of bands along the way. 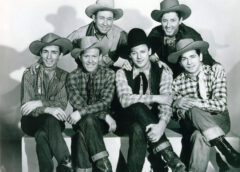 Sons of the Pioneers.

I was about 10 years old when I saw the Sons of the Pioneers. That’s the original group mostly (Len Sly had left to be replaced by Lloyd Perryman but Hugh and Karl Far with that hot fiddle and swing guitar were there and so was Bob Nolan, Tim Spencer, and Pat Brady). That was in Seattle or actually a bit north of Seattle in Lake City, Washington and at the Pioneer Days celebration. We moved to San Diego in 1952 and I saw a band back up Hank Williams at the Bostonia Ballroom (a mile east and a mile north of the city of El Cajon; it’s in the middle of the city now). It wasn’t the Drifting Cowboys (who got stuck by the weather wast of the Lagunas) but it featured Chet Atkins on lead guitar (Chet was supposed to be the opening act and wound up playing the whole evening). It wasn’t long after that I saw the Cliffie Stone Hometown Jamboree Band at the Bostonia. That group featured the great pedal steel and electric guitar duo Speedy West and Jimmie Bryant, along with Harold Hensley on fiddle, Herman the Hermit on the five-string banjo and Billy Leibert on keyboards. They had a number of singers with them. Bucky Tibbs, I believe, Harry Rodcay (the Hawaiian cowboy), Gene O’Quinn, and Molly Bee. All those country shows I went to with my Dad and I got to see so many great bands. Ray Price’s Cherokee Cowboys, Hank Thompson’s Golden West Cowboys (when Merle Travis was in the band), Roy Acuff with Bashful Brother Oswald on the Dobro, Howdy Forrester’s fiddle, and lots more. 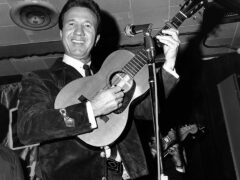 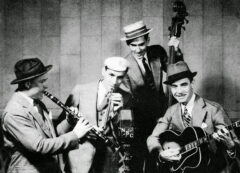 Around 1954 we started going up to LA to some of the shows there like Town Hall Party in Compton where, I saw Joe and Rose Maphis and that great band I talked about. Other regulars at Town Hall were Lefty Frizzell, Skeets MacDonald, Merle Travis, Gee Nee Sterling, Tex Ritter, Larry and Laurie Collins, Johnny Bond, Wesley and Marilyn Tuttle, and Jenks Tex Carmen. Then there were the guests like the Maddox Brothers and Rose, Faron Young, Marty Robbins, Wanda Jackson, Lester Flatt and Earl Scruggs and the Foggy Mountain Boys, Kitty Wells with Johnny and Jack, Little Jimmie Dickens, Mac Wiseman, and so many more. They were all backed up by that Joe Maphis Town Hall Band with Marion Worth on the steel guitar, Fiddlin’ Kate Warren on Fiddle and Joe on the double-neck guitar, tenor banjo, sometimes a second fiddle (if Joe was on the road Merle Travis or Johnny Bond would lead an all-performer band that was almost as good). Sometimes we’d go across town to the El Monte Legion Stadium on a Saturday to see Cliffie Stone’s show. He’d always have Tennessee Ernie Ford, Billy Strange, Joan O’Brian, the Armstrong Twins (Floyd and Lloyd), and usually guests like the Hoosier Hot Shots, Doye O Dell, or Hank Penny.
With our first visit to the Hometown Jamboree (Cliffie Stone) I noticed signs at the El Monte Legion Stadium for the Johnny Otis R&B shows held Friday nights there and talked my Dad into letting me go (I was listening to R&B on the radio a lot and collecting R&B 45s). Over the next couple of years I went to the Otis shows about 15 times. In addition to the Otis Band I remember seeing the Medallions, Little Esther Phillips, Trudy Williams and the Sixteens, Mickey and Sylvia, Lord Flea’s Calypso Group, the Penguins, Little Richard, Jesse Belvin, Little Julian Hererra, Marie Adams and the Three Tons of Joy, Big Joe Turner, B.B. King, Roy Milton, and a whole lot more. When we couldn’t make it up to LA on a weekend (we’d usually stay with my Aunt Ruby in San Pedro) I occasionally caught a show at San Diego’s Pacific Ballroom (12th and Broadway downtown). I saw B.B. King, Jimmy Reed, Don Julian and the Meadowlarks, and Bobby Blue Bland there. 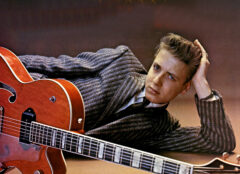 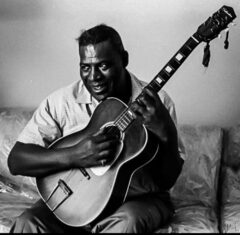 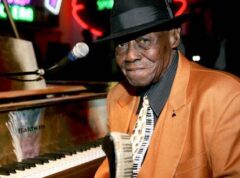 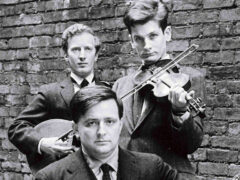 Later in the 1950s a lot of rockabilly performers started to appear at Town Hall, such as Eddie Cochran, Johnny and Dorsey Burnett, Gene Vincent and the Bluecaps; I even saw Ricky Nelson there. Two of Joe Maphis’ guitar students were James Burton and Roy Buchanan and he’d showcaseÂ  them occasionally.
The 1960s were my traveling years and I saw so many great bands at the Newport Folk Festival, the UCLA Folk Festival, the Chicago Folk Festival, the New Orleans Jazz and Heritage Festival, and, yes, I saw some rock ‘n’ roll (I was at the Monterrey Pop Festival). I got to see Clarence Ashley, Doc Watson, Clint Howard, and Fred Price; I saw Jim and Jesse and the Virginia Boys, Muddy Waters, Howlin’ Wolf, Sonny Boy Williamson, the New Lost City Ramblers, the Weavers (I even saw them once in San Diego at the Russ Auditorium), the Swan Silvertones, the Freedom Singers, the Paul Butterfield Blues Band (I even saw them back Bob Dylan when he first plugged in).
In 1967, back in San Diego, I started ae run that would have me put together the music for some 56 music festivals. Lots of bands to be heard. Bill Monroe and the Bluegrass Boys at that first festival. Stu Jamieson’s Boys and The Possum Hunters at the second, and on through the years with Joel Sonnier and Doc Guidry’s Cajun Band, the Phillip Walker Blues Band, the Balfa Brothers, Sweet Honey in the Rock, Hank Penny’s Radio, Cowboys, Roy Brown and the Big City Blues Band, the Highwoods String Band, the Strange Creek Singers, Sam and Kirk McGee, the Summerdog Bluegrass Band, the Wright Brothers, Lowell Fulson’s Band, Brian Steeger and his Out of Town Jaspers, the Ervin “Big Daddy” Rucker Band, Byron Berline’s Bluegrass California, the Gypsy Gyppo String Band, Any Old Time, Dr. Humbead’s New Tranquility String Band, the Old Hat Band, Joe and Rose Lee Maphis Band, the Hoosier Hot Shots, Martin, Bogan, and Armstrong and much more.
In 1994 I started my association with the Adams Avenue people booking the Adams Ave Street Fair and the Adams Ave Roots Festival. So many more names. Some favorites include D.L. Menard and his Louisiana Aces, the Dave and Deke Combo (alone and backing Hank Thompson and Rose Maddox), the Blue Flame String Band, Kenny Hall and the Long Haul Band, J.C. Labbie and his Cajun Ramblers, J.J. Jackson Band, Rick Daringer Band, the Beat Farmers, the King Brothers Blues Band, the Soul Stirrers, Louisiana Red, Santiago Jimenez y Conjunto, the Scottsville Squirrel Barkers Reunion, Big Jay MacNeely, Joe Houston Band, Billy Boy Arnold and his Band, Pinetop Perkins and his Band, the Balkan Cafe Orchestra, and I could list three or four more pages of folks we had down here. And that’s just the groups (so many others played solo).
So what I need is a redesign of that shirt with a double neck Mosrite electric, a Cajun Accordion, maybe some Ullian (Irish) pipes, a honkin,’ a sax man, a hot fiddler, an old time banjo picker (maybe a likeness of Clarence Ashley or Tommy Jarrell), an old timey band, and maybe some foot washin’ Baptist or Holiness Hollerin’ (depicted of course. It’d be nice if the shirt could sing and pick but I suppose that’s impossible. At any rate not picking up on the old time music audience with a t-shirt aimed at them, is missing a bet.
Recordially,
Lou Curtiss