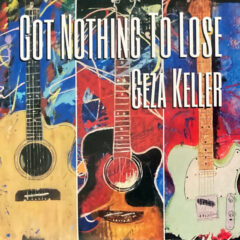 What do you get when you bring together an ace guitarist, veteran sound engineer, and a 60-something band guy breaking away to record a debut album of all original tunes? The answer is Got Nothing to Lose, an impressive album from singer/songwriter/guitarist Geza Keller, showcasing his songs that lean heavily on his life’s nostalgic journey through love and loss. His powerful and distinctive voice is on par with many of the ’70s and ’80s pop rockers of the day, deftly recorded by veteran sound engineer Sven-Erik Seaholm and exquisitely accompanied by ace guitarist Jerry McCann’s fiery lead guitar lines.
Although all the tracks have programmed drums and some have programmed horn parts, you wouldn’t know it as Seaholm, who also co-produced the project, dialed in believable settings for both. The opening track pulls no punches with “Let Me In,” a rousing rocker highlighted by Clarence Bacharach’s sax solo channeling the dulcet tones of “Year of the Cat,” followed by the reflective title track “Got Nothing to Lose,” a tribute to Geza’s college roommate, Victor J. Saracini, the pilot who was forced to fly United Flight 175 into the second tower of the World Trade Center on 9/11…. “and I don’t think I’ll ever see this life/ the way it used to be.”
Seaholm and McCann, who also plays bass on all tracks as well as the album’s producer, join in on backup vocals for the light-hearted and catchy rocker “Working Out the Kinks,” based on the power chord riff to the Kinks’ classic “All Day and All of the Night”… “every boy has got a dream/ to live his life with a beauty queen/ just one thing that seems unkind/ we all know love’s hard to find.”
McCann gets to flash his versatile lead guitar chops on “Train Diddy,” a country-flavored rocker with some nice slap-back tones à la Albert Lee. “Promise You’ll Come Back to Me” is set to a lively “Spill the Wine” Latin chord vamp, embellished by Bacharach’s tasty flute motifs against Keller’s lyrics… “love’s never easy when you struggle with the past/ you say you don’t want my love/ I hope that won’t last.”
“Big City Lights” and “Baby Started Rockin’” are two standout prominent rock grooves that will make you want to get up and dance to the hard-driving guitar riffs from McCann and Keller. Sandwiched in between those tracks is the powerfully sung pop power ballad “Come on Over Here,” and the haunting minor-keyed ballad “Storm,” Keller’s tune about Malaysia Air Flight 370… “storm blew up from the south/ that was the day when she got lost.”
Listening to “Deadline,” one may think it’s John Cougar Mellencamp entering the studio, but it’s Keller at his finest, belting out another one of his well-written rockers… “stand in an emotional breadline, searching for some love to survive/ all I know is when love goes cold, there’s nothing left to keep us alive.”
“Stringing the Moments Together” may be the best candidate for a commercial radio single with its flashy horn arrangement, full background vocals, and repetitive vocal chorus… “stringing the moments together/ they were the best we ever had.”
The closing track, “Can’t Be Sorry,” reflects on those who have lost their lives way too soon… “I remember how we all looked up to him and what he meant/ I heard he died lonely/ I know he’s heaven sent.” A fitting close to a successful debut album from one man’s life’s journey, observations, and recollections, guided by the passion in his voice and the stellar production work by McCann and Seaholm throughout.

CHICKENBONE SLIM: Serve It to Me Hot

MICHAEL CROSSMAN: Once in a Blue Moon