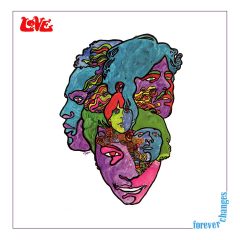 I caught wind that 2017 is the 50th anniversary of the release of Love’s seminal record Forever Changes, an occasion that I couldn’t let pass without a tribute listen to the revered 1967 album. I was mesmerized all over again by the range of materials: acidic rock guitar, marching rhythms, sad Mariachi horn sorties and Spanish guitar and tango beats, lush arrangements, and pop jazz in addition to the skill to write the private lyric that drew the listener closer to the speaker to hear the words but that denied a comforting assurance. An album full of wide roads, sharp terms, idyllic optimism, there were menacing undercurrents under the fleeting elegance. It was as if Arthur Lee had absorbed every note of music, from every style that poured out from Los Angeles radio, blending them at will to provide a true, original thing, something no one had heard before. It remains a fascinating and dramatic document; it’s damn good music.

The way this disc moves from one mood to the next, quickly but not jarringly, from upbeat, dance-happy jazz to the serene yet melancholic textures, shades, and tonalities the orchestrations create as they play over the solid rock band base, remains amazing and, I think, unequaled. The Beatles were antecedents, of course, in the employ of diverse musical styles in their songs and mixing those up in ways rock ‘n’ roll songwriters hadn’t imagined up to that time. But a major element of Lee’s and Love’s success in diving headlong into the choppy eclecticism is their avoiding the limitless disasters of others who attempted their own versions of Sgt Pepper. Not everything on Forever Changes has aged well, however. Lee’s lyrics sometimes become a murmuring stream of hippie “Know Nothingism.” The guitar solos, though brief, are likewise cringe-inducing, atonal fuzz tone blasts that sour this album’s otherwise sublime arrangements. Where were Hendrix and Clapton when you needed their savvy on the frets?

All told, this is only nitpicking. The record is of its time and still creates a spell 50 years later. Arthur Lee, as well, was one of the greatest of rock singers who provided an ironic commentary on identity politics; we see this in his beautiful crooner style, which echoes the under considered talent of Johnny Mathis and Sammy Davis Jr., two pioneering black performers who honed singing styles that were smooth, gallant, and acceptable to large white audiences. Lee also mastered the grunting, gravelly, slurring style of British singers like Mick Jagger and Eric Burden, two singers who tried to replicate the sound of their heroes Muddy Waters and Howlin Wolf but who, lacking the vocal apparatus, wound up creating a style of singing that was itself appealing and a means of personal expression. Lee was smitten with both styles and mingled them–the silky croon and the gruff bellow blended together–to sublime effect. The result is enticing, as mysterious and profoundly unique as Forever Changes.

Two songs in particular have remained with me these 50 years since I first heard this record–melodies and chords and winsome vocals that echo still amidst the accumulated memories, the opening song and the final song of the album. The first, “Alone Again Or,” begins as faint, volume slowly increasing, a Spanish guitar and a sharp, insistent report of a small drum kit, simple and elegantly finger-picked chords that bring us a confession of a kind, a soul reaching out to a lover who leaves him alone in his isolation. The motif isn’t lust, but connection. The second verse declares “I heard a funny thing /somebody said to me /you know that I could be in love with almost everyone I think that people are/The greatest fun…” As the melody charges, the song segues into a stirring horn solo and again fades off and then builds momentum again; we have the genius of the album, a mix of insight and naivetÃ©, trying to balance them out, contained in a gorgeously simple frame work.
Arthur Lee’s best writing was about the battle of a man trying to bring clarity to the many sensations his senses brought him. The albums last tune, Lee’s masterpiece, “You Set the Song,” is a fascinating stitchery of the kind of rushed discotheque pulse where everything is noticed and reality becomes a druggy collage. Details are word fragments, phrases and images do not follow each other in logical order; it is as good a description of an acid trip as I’ve listened to. The trippy pulse of the of the first section is followed by the steady, marching stride of the second portion. Horns blare a hearkening fanfare; drums kick in with a steady, even gait, and the narrator seems to have become a man who has crashed from his high after a vision and now allows his eyes to scour the hillsides and valleys and consider, finally, the kind of future he’d to live in. “Everything I’ve seen needs rearranging /And for anyone who thinks it’s strange/Then you should be the first to want to make this change/And for everyone who thinks that life is just a game/Do you like the part you’re playing?”

Yes, I realize this smacks of the old counterculture conceit, the young man smitten with The Truth, saying farewell to parents and old friends in order to become genuinely authentic. But Lee’s imagination prevents this from becoming a preposterous demonstration. Lee’s voice soars, croons, quivers, and strains effectively on high notes, floating with confidence over the increasingly dynamic horn arrangement. This is a march into the future; it astonishes me how magnificent this music still sounds 50 years on. Forever Changes, Love’s third album, is considered by many to being the best American response to the Beatles bar-raising disc Sgt.Pepper’s Lonely Hearts Club Band. As is too often the case, Lee’s greatest creative period was short lived; drugs, jail, eccentricity, and erratic behavior prevented him from regaining the heights he reached with Forever Changes.

Jesse Davis: Still Singin’ and Swingin’ After All These Years