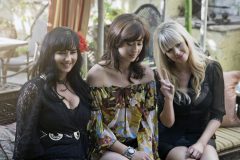 Calico, with their debut release, Rancho California, stand in the stream of a rich tradition of country music, a homegrown tradition in the Golden State. With a triple threat consisting of the distinctive writing and vocal and instrumental talent of Kirsten Proffit, Manda Mosher, and Aubrey Richmond, they have left a strong imprint on the national country music scene. The girls have each had solo careers that have touched mainstream country, offering a gentle call to return to the roots of what makes country music great–that is elegant pedal steel, big guitars, engaging songs, and soaring three-part harmonies. Their seamless music includes dynamic production and well-crafted songwriting that is at once as accessible as it is rooted in country tradition and reminiscent of the early work of Crosby, Stills & Nash; the Eagles; and Dolly Parton, Emmylou Harris, and Linda Ronstadt’s Trio project.Â  Their fresh sound is rooted in the rich history of California country music and revives the essence the ’80s Renaissance period of country music that produced such great Golden State-derived country bands as the Desert Rose Band and Sweethearts of the Rodeo.

It’s hard to pinpoint the exact moment California became significant to country music. It could go back to the Oklahoma migration of the ’30s, a result of the Great Depression and the Dust Bowl phenomenon, which produced some of the best in American folk music through the songs of Woody Guthrie and other troubadour migrant artists. Guthrie planted himself firmly in the soil of the California farmlands when he toured the Okie Camps in the late ’30s. Guthrie’s California migrant cousin Jack had a hit song in the late ’40s with “Oklahoma Hills.”

It could have begun with the rise of influential artists from the ’50s including Buck Owens and Merle Haggard from the Central Valley. Compton’s Town Hall Party also made a national mark on country music history as legendary artists appeared on the show. Not so long afterward, in the mid to late-’60s, seminal bands like the Byrds, the Buffalo Springfield, Poco, Rick Nelson and the Stone Canyon Band, and the Flying Burrito Brothers would make a mark that still reverberates. Venues like Hermosa Beach’s Sweetwater, Doug Weston’s Troubadour, and North Hollywood’s The Palomino, with shows like Ronnie Mack’s Barn Dance, would nurture some of the best in California- based country music over the last 40 years.

Calico, the band, has entered the influential Southland fray of creative misfits and earthy inventive roots artists on their way to national success. Kirsten Proffit, an award winning solo artist with scores of songs included in TV shows like Friday Night Lights and Dawson’s Creek, says when she first encountered Manda Mosher, she felt like she’d found a country version of a female Tom Petty. After a friendship that developed through participation in mutual shows and studio work, Mosher told Proffit she left the impression of being a kind of a “lone ranger.” It led to the pair co-writing one of the songs on Rancho California and a way of working together that honed theme and melody as they pursued vocal harmonies in the process.

Aubrey Richmond joined the band in April of 2014, with distinctive vocal power and violin artistry that is unique in today’s country music. She fit perfectly with her new band mates. According to Proffit and Mosher, they had been aware of Richmond and wanted her in the band for some time.

“We love what Aubrey brings to our sound. The way she incorporated her violin into the musical landscape. It distinguishes us.” Proffit said.

The band distinguished themselves at 2014’s Stagecoach Festival when Rami Jaffee of the Foo Fighters sat in with them during their set. “Rami produced ‘Dead Reckoning’ on Rancho.” Proffit said. “He added that signature Hammond organ sound that he brought to Wallflowers.” Mosher added. As fate would have it, the Foo Fighters were in Joshua Tree recording during the festival when Jaffe decided to pay his friends a visit. “Our rehearsal happened in the dressing room 10 minutes before we went on,” Proffit laughed.

The album, Rancho California, is a bright, original, well-crafted, often inspired contribution to the California Americana-roots landscape. With their three-way energy they have produced hits in every aspect of performance, songwriting, and the sonic bliss found when musicians capture a chemistry among them that amounts to something magical and rare. It’s easy to take for granted the seamless way the music and their voices blend here, but each song highlights this strength supported by some superb songwriting.
There is a cohesive flow to the album that plays like a harmony-driven tapestry of song. Key tunes include “High Road,” a cinematic desert narrative with a stirring Duane Eddy-inspired guitar by Mosher; “Dead Reckoning” plays beautifully with the aforementioned Foo Fighting keyboardist and an infectious chorus as well as an engaging Celtic mando part. The lush and lovely “Never Really Gone” may be the finest song on the ablum. One of the inspirations of the song was Manda Mosher’s mentor, songwriter Henry Gaffney, who passed away in 2010. It is a gentle tribute to those who teach us the finer things in life and then move on to their own fate and mortality. The distinction of the song is the three-part harmony throughout–Richmond’s beautiful heart-felt violin and Mosher’s haunting guitar. “As Mosher said, “It’s a song of gratitude for the teaching we’ve received.”
The best of California’s country past, present and future clearly emerges from Calico’s Rancho California and their live performances, with a bloodline that runs from the early music of the central valley to gentle nods to Buck and Merle as well as the creek clear influence of the high harmonies once familiar to Laurel Canyon; Crosby, Stills and Nash; and the Beach Boys. It’s possible to almost feel a grin coming our way from the stardust drifting cosmic cowboy, Gram Parsons and his wayward Cosmic American Music angels. Calico the band have begun a new chapter in Southern California country that begs to engage rest of the Americana music community. Today, they are poised to weave into a very important place in the ever-growing tapestry of Americana music.

Calico will appear at Java Joe’s on Wednesday, December 2, 8pm, and again at Ramona Mainstage on Sunday, December 11, 8pm.

Lyle Lovett and John Hiatt and their Circle of Song