February 2023
Vol. 22, No. 5
Buddy, Can You Spare a Dipyridamole Stress Test? The struggle to find adequate health insurance in the Arts by Raul SandelinAugust 2015
San Diego Is (Almost) Famous Again: Cameron Crowe Brings his Movie to the Old Globe Stage by Raul SandelinAugust 2015
The End of the Line for Mad, the Magazine That Was Satirical, Silly, and Serious by Paul HomiczAugust 2015
THE HOSPICE BUBBLE and Other Devastating Affirmations: Poems by Lizzie Wann by Ted BurkeAugust 2015
You’ll Get Pie in the Sky When You Die by Yale StromAugust 2015
LENNY BRUCE: Word Blower Supremo (and the brother that you never had) by Jon KanisAugust 2015
Art on 30th: Creating and Marketing Art You want to Live With by Lorraine IversonAugust 2015
To Candye–Love, Sue by Sue PalmerAugust 2015
Nicki Carano: A Tragic End for a Beloved Friend by Liz AbbottAugust 2015
Movies About Musicians: Real and Imagined by Ted BurkeAugust 2015
Advertisements 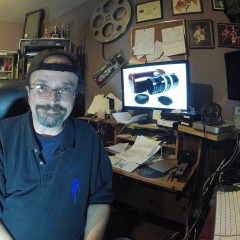 “It’s ‘Monkey Wards’,” I tell him. No respectable six-year-old calls it “Montgomery Wards!”

“I have a theory that’s what caused it,“Alan says. “When I fell off the toy swing set at Montgomery Wards… when I was six.” Alan and I grew up together. I remember when he fell off that Monkey Wards swing set.

But, that was 46 years ago. “The tumor grew behind the exact spot where I hit my head.” Now 52, Emmy-winning audio visual artist Alan Thwaites is battling brain cancer.

Alan found himself in a shockingly unfamiliar world when the tumor was found in 2010. The surgery left him paralyzed on his left side, which thankfully was temporary. Currently, there are no safe, effective treatments for Astrocytomas, Alan’s type of cancer. “Every time I speak to a health care professional, they say, ‘I’m sorry.’ I have searched for clinical trials and other cutting edge treatments. However, I don’t qualify for the new biologic-immunologic therapies because my cancer is considered less aggressive, for now.”

Like high wire walkers, artists often work without a net. Life is lived project by project, gig by gig, lucky break by lucky break. Living alongside the small business owner, sub-contractor, and itinerant farmer, people in the Arts are usually responsible for finding and funding their own insurance, patching together supplemental plans to form an unfinished quilt.

In addition, health issues, even minor ones can mean loss of work. Most artists rely on their kinetic abilities. So, a sprained ankle means no dancing. A broken finger means no guitar solos for six weeks. Unlike professional athletes who are insured against their injuries, artists can’t afford to get sick. (A singer can’t afford to catch a cold.)

“I was a daredevil. I flirted with danger: Diving, kayaking, climbing, biking, and skiing. This led me to Ski Videography.” Alan began his career in Telluride, skiing backwards, holding a camera (no poles) while racing in front of the fastest skiers in the world, including Olympian Franz Klammer.

Now, Alan has trouble navigating a crowded production studio. First, a knee, then the cancer. “Most of my production work was done with UCSD-TV. For 17 years, I did everything from painting the set to shooting, producing, directing, and editing multi-camera performances and interviews.” He had to retire a year ago. “My retirement funds were taxed to the hilt and the rest is almost gone.”

Endocrinologist Dr. SuZanne Chaves explains: “Musicians do not typically work for corporations with health benefits nor qualify for MediCal, so they fall into the ‘I can’t afford health insurance’ group. This encompasses those who can afford insurance today but may not be able to afford it in a few months.

“That being said, it is probably the best time in a long time to buy health insurance as an independent person,” Dr. Chaves continues. “It is no longer impossible for [artists and musicians] to have decent health insurance. Health insurance is giving you something for your money now. Mammograms, pap smears, birth control pills, colonoscopies, and other services that can prevent future problems are covered. The junk plans that didn’t cover anything are now off the market. Also gone is the lifetime maximum payout limit for insurance companies. These are all good things.”

Dr. Clayton adds, “Now, under the Affordable Care Act, there is the Health Insurance Marketplace and Covered California making it easier for people to buy insurance.” There are also companies that cater to people in the Arts. Music Pro Insurance, for instance, works exclusively with musicians’ insurance needs.

Another alternative is to work with a physician directly. Instead of paying an insurance company high premiums, many are choosing to work with doctors directly, especially for office visits and things that can be covered out of pocket. “Physicians who collect payments from patients instead of insurance companies can set their charges and tell the patient up front. The Association of American Physicians and Surgeons (AAPS) has a partial list of direct-pay physicians by location. They also have links to Medibid, making it easier to find the best price for specific medically-needed surgeries,” Dr. Chaves says.

Alan, who currently does have Kaiser via Medical now, began a GoFundMe campaign to help pay for future medical expenses. One experimental surgery was first quoted at $80,000, then jumped to $250,000.

“The lack of predictability in costs is a problem as well. Few people know, for example, how much they are going to be charged if they make an initial appointment. It is not determined by the physician but by the insurance,” says Dr. Chaves.

Though he didn’t raise the $250,000, Alan did raise a few thousand, which allowed him to pay for some herbal treatments that seem to be working. “My latest MRI showed no change since the last scan four months-ago.”

“Being able to afford and access healthcare may require some thinking outside of the system for artists and others who may be temporarily or self-employed. However, no other group is more up to the task. This diverse group of creative thinkers can get it done and, if vocal about their desires during the process, shape the way health care is delivered for all,” Dr. Chaves says.

In the meantime, Alan Thwaites continues his craft from home, working for the clients he has met during his 30 years in the business. His main focuses these days are photography and 3D design. “It’s a combination of photography, sculpting ,and animation. I can manipulate amazing backgrounds. I like to make images that don’t have any human scale. Adding animation just makes the scenes come to life.”

Here are some valuable and interesting links …
healthcare.gov/get-coverage/

Someone’s in the Kitchen with Judy: 35 Years of the Big Kitchen

Art Around Adams and So Much More!