February 2023
Vol. 22, No. 5
Big Jon’s Summer Blues Bash Gets Real by T.E. MattoxJune 2015
Lady Brain Presents “Home is Where the Art is” Holiday Party and Clothing Drive by Lindsay WhiteJune 2015
How Did You Get Here? by Chuck LapinskyJune 2015
Aging Rockers and Fixed Incomes by Paul RosengardJune 2015
Doors of Change: An Environment of Trust June 2015
Notes from Desert Trip by Matthew BurkeJune 2015
Hail the Conquering Groovies! by Steve ThornJune 2015
The Spring Harp Festival Blows into La Mesa on Saturday, March 26 by T.E. MattoxJune 2015
MARTIN GRUSIN: A Loving Tribute from his Daughter by Aryn GrusinJune 2015
Ballads and Blues with Jeffrey Joe and Eric Freeman June 2015
Advertisements 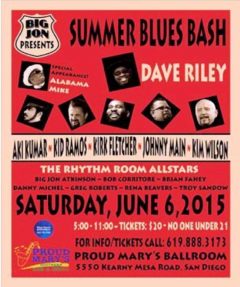 Big John Atkinson is on a mission. He’s determined to bring more traditional ‘old school’ blues back to Southern California. Following the success of his Blues Harp extravaganza back in January he’s called on a few blues friends to make it happen again. Atkinson says this time he’s shining a light on the Blues Guitar and recently spoke about how he determined just which friends to invite. “I decided the artist by the music style and genre I think San Diego needs to see.” Atkinson says. “There are not a lot of traditional cats in this town and this city really needs to see what the ‘real’ original sound was from Chicago and St. Louis and Memphis.” You can just see the grin spread across his face. “A lot of the cats I’ve played with, the ones that blew me away…I just want others to see them too.”

For the June show, Atkinson has chosen wisely… “Dave Riley is a traditionally seasoned blues man. He plays a rich, electrified Delta style and really has a superb energy and tone. He is one of the very few blues singers still around doing the music justice.”

Jon’s next invitation went to a man originally from the Deep South. “Alabama Mike is an exciting traditional blues singer and one of our elder statesmen. He’s from that ‘60s style of blues with plenty of showmanship and rowdiness that gets the crowd on its feet…where you can’t help but have a hell of a good time.

Harp players will also be well-represented. “Kim Wilson from the Fabulous Thunderbirds returns and is one of the greatest harmonica players and singers ever to play the blues…period!”
The whole program is front-loaded with talent and friends. “Aki Kumar from San Jose is known for his stellar harmonica and for blues ‘done right.’

Three phenomenal guitarists will anchor the night including Kid Ramos, Kirk Fletcher, and the front man for the 44’s, Johnny Main. Atkinson says Main is “a fantastic singer and brings a different edge to the blues. He plays a raw and greasy blues-oriented guitar, but he does it ‘tastefully.’”

Big Jon has personalized the night by rounding out the bill with some Phoenix rhythm and “one heavy blues band; Bob Corritore and the Rhythm Room All Stars. This band can play both original material and covers of the early blues as if they were their own.”

The show back in January received high praise from both critics and fans and Atkinson admits there was a promotion learning curve? “I learned that the show plays itself. These players are all such pros that they really just do the work they are supposed to do. A show like this isn’t put together anywhere else and since I’m pretty good friends with most of the blues artists in the area… all these forces came together for a huge night of powerful music. We always have tons of fun together and everyone gets along like brothers. We get together for these shows and really give the crowd an honest day of music by the best in the world.”