July 2022
Vol. 21, No. 10
After 18 Years, a Music Era Ends as the 7th Day Buskers Play Their Last Sunday at the Hillcrest Farmers Market by Dwight WordenJanuary, 2016
The Return of IPO San Diego: After a Five-Year Local Hiatus, David Bash’s Unique Music Festival Makes a Much-Anticipated Return by Scott SamuelsJanuary, 2016
This Saw Is Not a Tool by Derek ShawJanuary, 2016
Our Redneck Poet, Merle Haggard by Mark PulliamJanuary, 2016
Linda Hoover: I Mean to Shine by Jon KanisJanuary, 2016
Tom Griesgraber: Now a Member of the California Guitar Trio by Paul HomiczJanuary, 2016
The San Diego International Fringe Festival is Back! by Laura PrebleJanuary, 2016
Mary Chapin Carpenter: We Remember Moments Not Days by Terry Paul RolandJanuary, 2016
Judy Henske: A Remembrance by Barry AlfonsoJanuary, 2016
KIDS THESE DAYS: Christone “Kingfish” Ingram, Eurovision, and the Aftermath of the Y2K Baby Boom by Raul SandelinJanuary, 2016
Advertisements 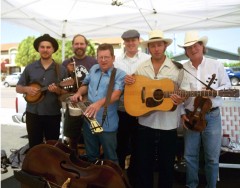 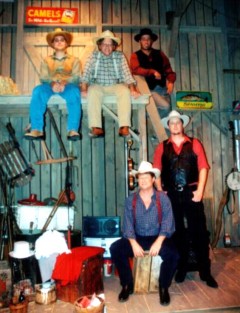 The Buskers on the set of Smoke on the Mountain. 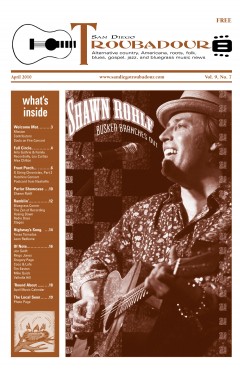 Shawn Rohlf (and the Buskers) was the Troubadour cover story, April 2010. 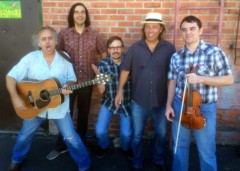 Shawn Rohlf, a musician newly immigrated to San Diego, was looking for places to play back in 1997. The Hillcrest Farmers market was newly opened–one of a handful of farmers markets at the time. Shawn talked to management and received permission to busk on Sundays for tips. At first he was solo, playing banjo, guitar, harmonica, and singing. After a few Sundays friends began to drop by to join in, and pretty soon he had a very popular group of regulars playing every Sunday for an adoring crowd of equally regular fans. Now, 18 years down the road, the band has played its last Farmers Market gig.

Shawn formalized this early group into the first iteration of the 7th Day Buskers (get it, busking at the market on the 7th day of the week?). Regular members included Shawn Rohlf on guitar, banjo, harmonica, and vocals; Don Hickox, fiddle and vocals; Dwight Worden, fiddle; Steve Peavey on mandolin, guitar, and vocals; Greg Carpenter, bass (soon replaced by Ken Dow); and Robin Henkel on dobro and vocals. The group began to play gigs all over town but could always be found at the Hillcrest Farmers Market, like clockwork, every Sunday.

Over the years many players passed through the band:

Ken Dow, bass, went on to perform in Jersey Boys in La Jolla, then on Broadway in New York. He recently returned to San Diego.

Melissa Harley, who replaced Don Hickox on fiddle when Don moved on to other bands and to Irish music, won the open division of the Weiser National Fiddle Championships. She is now married to her Busker bandmate, Ken Dow, whom she met though the band. They are now raising twins in San Diego.

Dwight Worden moved on to play in several other bands (Prairie Sky and Gone Tomorrow) and to assume public office as an elected councilman in the city of Del Mar.

Steve Peavey moved from the Buskers to a successful career in Nashville and is now happily married, recently touring with Don Williams.

Dan Broder passed through the Buskers to a successful career as a research scientist in Maine.

Robin Henkel continues his standout career in San Diego as one of the region’s premier musicians. A high point for the Buskers and Robin was when, as a Busker, Robin performed one of his original tunes with the San Diego symphony.

Hideo Chino played guitar with the band on Sundays and can be heard on the first CD. He went on to a successful career as a juvenille judge.

John Mailander played fiddle with the band and is now recording and touring nationally with his own group.

Likewise, many of the regular fans who spent time every Sunday with the Buskers started as toddlers singing Old MacDonald with the Buskers and are now graduated from college with kids of their own. Through it all the one constant has been Shawn, recruiting new players, mentoring and challenging all to do their musical best, writing much of the band’s material, and trail bossing the recording projects.

Wondering how good this band is? Well, so far they have been nominated many times and won an award for best Americana Band at the San Diego Music Awards (2004); they performed with Marvin Hamlisch and the San Diego Symphony during summer pops on more than one occasion; they starred in a successful Lamb’s Theater performance of Smoke on the Mountain, which played an extended run in San Diego and then traveled to Indiana; they did a couple of U.S. tours; and they have produced four highly acclaimed CDs, with a fifth in the works, which was recorded live at Java Joe’s.

If you are a Buskers fan, fear not! Although the Farmers Market Era has ended (the last performance was Sunday, December 13, 2015), the band is alive and well and continues to record and perform. Visit them on Facebook: www.facebook.com/ShawnRohlfandtheBuskers.

The current performing and recording edition of the Buskers (which is the edition seen at the Hillcrest Farmers Market for the past several years) is, according to many (including Shawn), doing the best music yet. The group is a highly in-demand acoustic roots band.

Band members are: Shawn Rohlf on vocals, guitar, banjo, mandolin, and harmonica; Joey Harris (formerly of the Beat Farmers) on guitar and vocals; Jef Kmak on upright bass and vocals, Richard “T Bone” Larson on drums and vocals; and John-Michael Brooks on fiddle. This iteration of the Buskers will be the featured house band for the upcoming O’ Berkley Where Hart Thou? at the Poway Center for the Arts on April 9th.

Shawn gives a huge thanks to the Troubadour and its leadership, Liz and Kent, for all their support over the years, and we give it back: Thanks, Shawn and all your Buskers, for your 18 years of great music at the Hillcrest Farmers Market. You’ve earned your place as a San Diego icon!

Nathan and Jessie: After the Deluge