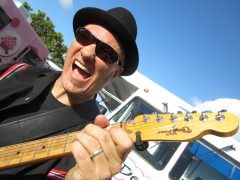 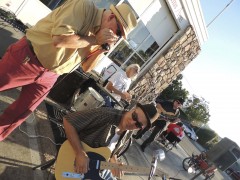 The Biscuits cookin’ up some music.

Chickenbone Slim. Perhaps the most essential question is this: Why? The answer: because there needs to be a Chickenbone, of course. And he needs to play the blues.

After attending San Diego State University and playing rockabilly and rock in a number of cover bands starting in his twenties, Larry Teves realized his real passion was for blues music. The Northern California native was soon a veteran bass player in the bands of several established local blues outfits, including Lady Star, the Mississippi Mudsharks, and Tomcat Courtney. Teves parlayed his singing voice as well with good results, eventually fronting the Boogiemen and Jinxking, as lead vocalist and bassist.

“I’ve been playing music a long time. In the Boogie Men, we did pretty well. I was in the Mudsharks with Scottie Blinn; he definitely influenced me, he’s great. I played with Tomcat. After that, I started the Boogie Men with Richie Blue, we did that for a long time, about 10 years. I played bass and sang with them. That was when I kind of came to the realization that if I want to have my own sound, I have to play guitar.” In 2012 he embarked on the transformation of Larry Teves to Chickenbone Slim, bluesman.

His abrupt turn from four-string to six after years in the business was not taken lightly. A few minutes with Teves discussing blues reveals that he is no casual fan but rather is a student of the genre and the figures who have created and shaped it over the decades.

“There were two reasons. As a songwriter before then, I needed to know more about guitar. This is real guitar-based music; that was the real practical reason. The other reason was that my guitar player got this old amplifier. He brought it over and I heard it and the sound of that amplifier was just this cool sound, not like anything I’d heard. It really got me excited. I was playing guitar through it to hear it and it got me inspired. I wanted to get that tone.”

This began what Teves calls “the chase” of tone. He soon ended up with the amp-only powerful enough for recording, it became “part of the chase.” Soon enough he realized that having a Fender Telecaster was also a big part of the sound he sought and he invested in a so-called “Nocaster” reissue, a fat-necked model based on the few, priceless short-lived 1951 editions of the legendary Leo Fender’s utilitarian guitar masterpiece. He also favors rare Gibson BR-1 amplifiers from just after World War II, which get killer tone despite being from a period when electric guitars were almost unheard of. He was becoming a guitar player, with a keen ear.

Soon, he was “realizing that the more I played, the more I liked doing it. It helped my bass playing; I still get hired as a bass player.”

Having a guitar and amp weren’t enough. “I’ve been playing blues for a long time, but as a guitarist I feel like I might as well be a 23-year-old kid. [Theres] so much to learn and the guitar is almost unlimited. I don’t think you ever fully master it.” It was time to go to school, and he engaged well-known local blues player Robin Henkel to teach him the instrument.

“What I like about Robin is that he’s not only sympathetic to really old blues, he knows old blues, he knows new, he’s constantly learning. At this point, he teaches you two things–he helps you interpret blues, but he also sneaks in a lot of theory, the whys. He’s the coolest guy, and it’s always making my mind think about music. He’s always thinking about it, and it’s this common language–it’s a great friendship now.”

One thing that Teves never wavered on was what kind of music he was going to play. In his younger days in Santa Cruz he had opportunities to see many of the top touring blues acts like Freddy and Albert King, John Lee Hooker, James Cotton, and several shows with Albert Collins, whose Telecaster sound made an impression.

“I didn’t miss him when he came to town, everybody did, we were really influenced by all these guys who came through. We got a cool mix; there is kind of a West Coast sound and I feel like that is where I am. But on the other hand, in that sound, there is such a wide range in styles. I think on the West Coast; we have an interesting intersection of styles. I was just talking to someone about this: people in New York go to Florida. People in Chicago, in the Midwest, come to San Diego, to the West Coast–they come here for the sunshine instead of going to Florida. So here in California, we had T-Bone Walker move out here, and he’s probably the seminal guy for blues guitar and rock guitar; he moved to LA, so we get this Texas influence.”

Teves is firm about not imitating or emulating any one particular sound as a guitarist or singer, feeling that each artist works to develop their own voice, but speaks freely of other influences, including Jimmy Reed and Johnny Guitar Watson.

“We also talk about the Fabulous Thunderbirds, and for a lot of guys here it’s guys like Hollywood Fats, William Clarke developing this West Coast blues scene. John Lee Hooker lived in Northern California–he’s a huge influence on me; the most fun thing to play is a John Lee Hooker boogie. You can really explore when you play John Lee.”

After a period of wood shedding, Teves used his many local contacts to pull together a band that included guitarist Pete Fazzini, harp player Nick Walsh, Scott Smart on bass, and drummer Kurt Kalker. Since its inception, the personnel tend to rotate from a pool of local veterans who play almost interchangeably in several blues combos; Walsh and bassist Mike Chiricuzio are regulars in his current band.

“My bass player now, Mike Chiricuzio, knows everything that I do. While I’m fronting the band, he can make sure it’s tight with the other players if they haven’t played with me that much. Most of the players I play with play with me often, if not constantly.”

The band got tight practicing in Teves’ Adams Avenue office, then playing at nearby Smitty’s Service station on Tuesday evenings, a gig called Tasty Truck Tuesdays, which lasted two years. Packing axe, tone, and a combo, now he wanted an identity. Friend and fellow guitarist John Flynn (Little Kings) was happy to help.

“They used to call me Scary Larry and I realized when I started playing guitar, I probably needed to have a different persona. It’s a branding thing, I guess. It’s funny because John Flynn gave me the name Chickenbone Slim; he said there ‘needs to be one.’ When I started playing out on guitar and was just learning, I always felt like I had to get good enough to earn the name. And no one questions what I play, when I say what my name is, right? ‘Chickenbone.’ ‘Oh, you must play blues.’ Thank you, that was the goal.” The band got a name as well: the Biscuits.

The new band was soon playing regularly in local blues haunts like Proud Mary’s, the Speakeasy, and Riviera Supper Club. Teves is enthusiastic about the local blues scene and fans, who he feels are knowledgeable and serious. He’d like to see more of a blues presence in the downtown clubs to benefit the many visitors to our sunny city, and he has definite ideas about educating younger listeners.

“We have some really serious fans. We’ve been having this discussion in our community about exposing the blues to younger people, and I think that’s not going to happen in clubs. It’s going to have to happen on college campuses, in community events, and I think it does, but we’re not doing enough. I think people have to see blues. I can remember the first blues band I saw, I can’t remember their name, but that made me go, ‘I want to go check it out, I want to see more blues.’ The next thing you know, you’re seeing someone really good, someone big, and you’re, ‘Oh, okay, now I get it.’”

“I think blues is a virus; once you catch it you’re stuck with it. I meet a lot of younger people and once they hear it, it’s like a light bulb pops and, ‘Damn!’”

As his experience as a guitar-playing front man grew, he started gathering original songs, and in 2014 he was able to record a full-length CD, Gone (reviewed in this issue).

“As a songwriter some of my influences are that I really try to have a sense of humor. To me, blues are often very ironic. So, I guess I’m influenced by Mark Twain and Yogi Berra. I like to play with wordsÂ  and try to be clever but I’m trying to be truthful in my irony. And so on ‘Blues for Christmas’ it’s like, how low can it go? A lot of blues is like that.”

Prominent on the album are harp contributions by Jon Atkinson, who also plays guitar on a track, as well as Marty Dodson on drums, guitar by Danny Michel, and Chiricuzio on bass. The live-in-the-studio recording is lively roadhouse blues in four-minute chunks, heavy on Atkinson’s assertive harp with strong vocals and themes about the hard living and bluesman sexual braggadocio–built on familiar instrumental templates. One tune, “Tomcat,” is inspired by Courtney (but is the tale of an aggressive black cat owned by Teves). The boogies and shuffles fit comfortably in the small-combo blues notch with discs by bands featuring Jimmy Thackery, Omar Kent Dykes, and Mike Morgan.

Teves feels that the live experience is key to the blues, and future plans include extending the Biscuits’ playing audience to include Julian and even farther away to possible California and Arizona tours. Going forward, his mission seems clear.

“I think the music comes first. I didn’t decide to play blues because I decided that I was going to be a star. Ain’t gonna happen. What did BB King say, ‘Playing blues is like having to be black twice?’ I’m white, so I would be lucky if I was even black once, but it’s just that general expectation of disrespect, we just go on assuming it. And we’re pleasantly surprised when people react positively. You’re chasing the tone. You have to put the art first.”

“My first priority is just to get better. As a singer and songwriter, I always want to improve. I have to say the more I play, the better it is. Keep growing both where I play and how much I play, because I expect to do it. I’m inspired by Tomcat, who is how old now, 86? I want to do it that long–I should live so long, right?”

And then, he also might want to do it because there has to be a Chickenbone.

After 18 Years, a Music Era Ends as the 7th Day Buskers Play Their Last Sunday at the Hillcrest Farmers Market

Keeping Up with the Moves