January 2023
Vol. 22, No. 4
Keeping Up with the Moves by Frank KocherNovember 2015
Back with a Bang! Java Joe's Reunion at San Diego Folk Heritage by J.T. MoringNovember 2015
Book Review: The Philosophy of Modern Song by Bob Dylan by Ted BurkeNovember 2015
Rick Nash: Bass Man in Demand by Wayne RikerNovember 2015
Mod Revivalists the Trebels to Reunite for 40th Anniversary Show by Jim TrageserNovember 2015
If Music Be the Food of Love, Play On: Dually Noted Pairs Fine Food and Fine Music by Paul HomiczNovember 2015
Harold in the Land of Jazz by Bart MendozaNovember 2015
Sephardic Dance and Music by Yale StromNovember 2015
Loretta Lynn: A Special Tribute to the Queen of Honky Tonk by Terry Paul RolandNovember 2015
Ben Grace Gilmore: It's All About Building Community by Sandé LollisNovember 2015
Advertisements 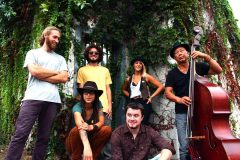 Perhaps oversimplifying, jamgrass is the hybrid genre made up of bluegrass players who want to play country rock or even jazz on their wood instruments. Or, taken a step further, much of it is played by musicians who dig the Grateful Dead and the String Cheese Incident, and also like stretching out instrumentally. The songs usually mix quirky themes and challenging improvisational technique, and often zig-zag across style boundaries. In San Diego, the Moves fit squarely into the jamgrass mold, six musicians from varying backgrounds who seem to have one thing in common: an ability to blend together, playing offbeat songs with flashes of virtuoso instrumental talent and tight harmonies, built on swing jazz and hill music chassis, often full of surprises.

Moves founder Tim Norton is a New England transplant and Berklee College of Music alumnus with experience playing with Boston area acid-jazz, jam, and funk bands. Before moving west, he revisited roots and bluegrass music — focusing on songwriting, while keeping a strong interest in the music of northeastern jam bands like Phish and Railroad Earth. Before long, he found a writing and playing partner in singer/mandolinist Rae Irelan, originally from San Diego and studying dance in Boston. She is a multi-talented artist who is also a member of the contemporary dance company the Movement Initiative.

“I found this love for improvisation and that kind of music, but an offshoot of it was [that] I loved the bluegrass vein of that. There are bands that play this high energy live music, dance music that’s really upbeat — and we wanted to create something like that, but with our love, which we found in the Appalachian mountains,” says Norton.

“While we were in Boston, Rachel and I would take numerous trips down to the Blue Ridge Mountains, in North Carolina. Actually, what kind of sparked all of our bluegrass writing was meeting this old guy on top of Grandfather Mountain, named Floyd Gragg. He mumbled to us for a while and sold us a CD, and that was the only CD we listened to for the rest of that trip; we were just sold on it. So we started writing a lot more in that simple vein of three-chord cowboy songs, kind of simple folk-based stuff.”

Both Norton and Irelan refer to their music process as “the melting pot,”’ and subsequent writing forays have included road trips from Boston to San Diego, then to Seattle and back, taking their time and collecting material on the way.

Irelan recalls, “We took a month doing that, and that is where a lot of the songs were created, living on the road. And other styles of music were discovered.”

Norton adds, “Travelling together in our van in 2013 is when we wrote all of the songs on this [new] album, the eclectic part of our writing. She would sit in the driver’s seat and I would sit in the front seat with a mandolin or a banjo and we would just sing, driving into the middle of nowhere.” Along the way, Irelan proved a quick study on mandolin.

“Going to each location and picking up on the music that was there, and the local scene, and putting it into the melting pot,” says Irelan. The result was a lot of songs about unusual characters and odd locations.

By early 2014, installed in Ocean Beach, a band began to grow, with the February addition of a licensed OB acupuncturist [Acusport Health Center] on double bass and vocals, Aquilino Soriano. Guitarist Cameron Radke is another music college veteran (San Francisco State), one of the legions who had a musical epiphany after hearing Django Reinhardt’s gypsy jazz. He responded to Norton’s requests to bring his nimble fingers to the Moves in the summer of 2014, relocating from the Bay Area.

The newest members joined in June 2015 and contribute percussion and drums: Rhythm Turner and Pete Eichar. Turner is a veteran of Rhythm and the Method, a hard rocking local band that has included her brother and father, and specializes in percussion, with strong vocal chops when needed. Eichar previously played with the Stache Bash Family Band and the reggae group Uproot — and he sings, too. As Norton says, “We have six singers.”

From the start, the Moves were different. Norton and Irelan are live music aficionados (“We consider it our church,” says Irelan), but their favorite styles are big band funk, dance, and Afrobeat bands like Antibalas. Unlike many shaggy and tie-dyed jam players, they are young, lucid professionals outside of the hippie/Deadhead band mold. Both Norton and Radke are professional music teachers, and Irelan teaches yoga and dance. He’s also involved in learning on the receiving end, with online Berklee courses in music business that have proven very helpful to his fledgling music group.

“I really need to know what I’m doing, business-wise,” he says. “It’s saving our butt.”

The band made a quick and favorable local impression, together just over a year when nominated for Best Americana Band by the San Diego Music Awards this year, without benefit of a recording.

That situation has changed, as they recorded their debut CD, Yonder Blue, in late 2014 and released it September 20. Funded by a crowd-funded Kickstarter platform, they were able to finance the disc in only seven weeks with contributions from nearly 180 donors.

They recruited a friend to produce, Benjamin Roberts, an old friend and former Berklee roommate of Norton’s, and recorded it in a chapel at Pine Summit Christian Camp, 7000 feet up Big Bear mountain. They even had a video film crew (Pure Cinema Productions) film the entire process for a documentary.

The result is a studio album by a group whose forte is live performance yet squarely aimed at the band’s fan base. An unabashed concept album, its instrumental and lyrical themes appear and reappear while the music jumps genres from energetic, jazzy swing to bluegrass and country-soaked pop, most of it delightfully oddball and funky. The songs aren’t extended forays, but the traditional bond between jam band and audience permeates the music. Norton has been to 60 Phish gigs in a five-year period, so it’s no shock that Yonder Blue in spots sounds like an update on the acoustic efforts of that band, with the same kind of ear-catching guitar playing and interesting lyrics.

Norton explains: “People go, ‘Why are you doing a full album? You should just release three songs, wait three months, release three more.’ No, it’s the whole idea of an album — here it is, put it in your CD player. The new album has a 1970’s sound. I chose to do that, I grew up with Yes, Zeppelin, and Floyd albums, albums that were fully ‘of one piece.’

“We wanted to evoke that live performance we are known for — the energy and spontaneity of it — and how we will segue from songs and you don’t know what is coming next, sort of an element of surprise. It doesn’t stop; it’s not just song, song, song.”

Irelan agrees. “We wanted to get away from what has been happening with most music, with Spotify, online downloading, where it is just one song at a time. We really wanted to do a whole art piece, a continuous flow. An underlying theme throughout the album is continuing to move and to travel forward, in a positive way in every part of your life. Emotionally transitioning, growing.”

Moving forward themselves, the Moves have designs on tours and more recording, while nurturing their local fan base. Soon after their album release, they embarked on a 20-gig tour of four western states. They just bought a van for more travels, and Irelan maps out other plans.

“We’re going to be putting together another tour in the Spring, probably the Pacific Northwest. And we’re going to be working on the next album soon. We have at least ten songs already.” Their goals also include playing on the jam festival circuits in the near future.

Locally, the key to their success is the core of jam band fans in Ocean Beach. The large Grateful Dead community there helps give the band a home base; their repertoire includes Dead covers, and the members went to the Bay Area to observe the iconic jam band’s 50th anniversary earlier this year. They play frequently at Winston’s, 98 Bottles, and the 710 Beach Club with occasional gigs elsewhere. Norton feels they have established themselves as a niche market.

“We’ve found a lot of fans that really enjoy our music and have been searching for something similar to our sound here in San Diego,” says Irelan. “Jamgrass has helped us stand out, because a lot of people really think that our music is unique and new and fresh to their ears.”

Irelan explains that the band has another purpose as well, a unique interpersonal dynamic.

“We all come together to play music because we all feel that can bring a lot of joy into our lives. A big mission of the Moves is to create this community and to support each other within the band. We’ve created a family within our band, and the band members that are all with us today. We recently added the word ‘Collective’ onto the end of ‘The Moves’ on our website and business cards. The reason we did that was to convey the idea that all of us are contributing, and lately we’ve been having band members bring in their own songs and we collaborate together to create what ends up being a Moves song. We really wanted everyone to share their input, share their musical backgrounds.”

“You can say we are the Moves, but we are now becoming the Moves Collective with our newfound family of musicians and collaborators,” says Norton. “The whole idea is that we are trying to create a family of artists, and to bring that joy and love to our audience. Let’s show them, ‘Hey, this is a good time, let’s enjoy ourselves and be present.’”

Tyson Motsenbocker: From Barista to Balladeer