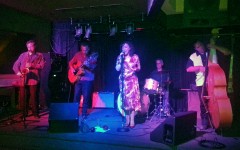 It’s hard to believe it’s been 12 years since we’ve heard new music from Eric Lieberman and Alicia Aragon. Truth be told, it’s been worth the wait. Sing Your Own Song is a collection of fourteen recordings that Lieberman says he’s “incredibly proud of.” Understandable considering half of the project is all new material written by an artist who never thought of himself as a songwriter. That and the fact his friends who just happen to be some of the best musicians in Southern California appear on the CD. Lieberman grins when he admits it made the entire production “more meaningful and personally rewarding than anything we could have imagined.”

The obvious question, what took so long? Back in 2006 Eric was diagnosed with a rare neurological condition known as focal dystonia. Refusing to play the “victim” role and, with Alicia by his side, Lieberman has spent the last eight and a half years retraining muscle movements by practicing or playing an average of five hours a day, sometimes until the wee hours of the morning. Determination and dedication paid off and Sing Your Own Song is the culmination of those efforts.

From the gospel flavor of the title track, to the screaming sax from Jonny Viau in “Nothin’ to Prove,” it’s storytelling in its purest musical form. Lieberman breaks out the slide and Nathan James shines on his resonator as the CD comes full circle and ends with a satisfying, good-time blues romp, the Vinson-Chatmon classic “Sittin’ on Top of the World.” Recorded in just four days at Sacred Cat Studios earlier this summer, the entire production gives listeners a glimpse into the endless possibilities when an artist refuses to give up or give in.

Check out Blue Largo at the Sing Your Own Song CD release party happening Friday September 18th at Tio Leo’s. Showtime is 8pm and there’s no cover, so put on your party shoes.

Astra Kelly Goes “Back to Ten”