January 2023
Vol. 22, No. 4
5 Things You May Not Know about Bart Mendoza February 2013
Lady Brain Presents “Home is Where the Art is” Holiday Party and Clothing Drive by Lindsay WhiteFebruary 2013
How Did You Get Here? by Chuck LapinskyFebruary 2013
Aging Rockers and Fixed Incomes by Paul RosengardFebruary 2013
Doors of Change: An Environment of Trust February 2013
Notes from Desert Trip by Matthew BurkeFebruary 2013
Hail the Conquering Groovies! by Steve ThornFebruary 2013
The Spring Harp Festival Blows into La Mesa on Saturday, March 26 by T.E. MattoxFebruary 2013
MARTIN GRUSIN: A Loving Tribute from his Daughter by Aryn GrusinFebruary 2013
Ballads and Blues with Jeffrey Joe and Eric Freeman February 2013
Advertisements 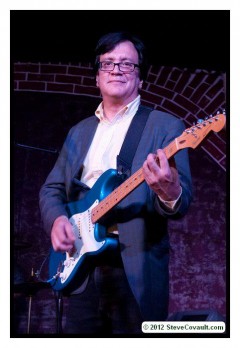 A beloved member of the San Diego music community, Bart Mendoza has been lending his talents as musician, journalist and friend. Here are five things you may not know about Bart:

1. I was originally the drummer in the group of school kids that became Manual Scan.

2. I’ve actually driven a car — twice. Once in Drivers Ed class during high school and then again in the mid 1980’s while on tour with Manual Scan. Somewhere in the desert of Arizona, I drove about a mile on a dare. There was nothing to hit.

3. I don’t drink alcohol. Nothing against it, I’ve had a drink, it’s just not my thing. I also don’t drink anything with caffeine in it. I’m a massive insomniac, I’d never sleep.

4. As a kid, I aspired to be a magician and even did a few shows. I frequented Chuck Martinez’s Magic Shop on 30th in North Park,

5 Things You May Not Know About Jeffrey Joe

5 Things You May Not Know About Megan Carchman