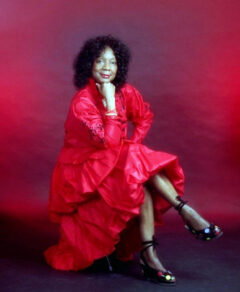 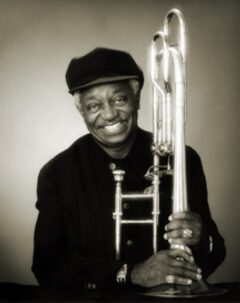 “Your lips are too darn big to play trombone or trumpet!” These cruel words splashed over the psyche of a small brown boy on his first day in music class in Buffalo, New York, in the year of our Lord, 1934. “You got to play tuba!”
The small boy gathered up his courage and declared defiantly, “My Uncle ‘Big Chief’ Steen has a great big ol’ record collection. He’s got Louis Armstrong playin’ a trumpet with lips so big they call him ‘Satchel Mouth!”
And with that statement, the boy vowed deep down in his beating heart that he would buy a brand new shiny gold trombone one fine day!
When he was in high school, “Big Chief” introduced him to an old musician friend at the local Elks Lodge. Ray Smith was his name and his rheumy eyes lit up at the prospect of lending the youngster an ancient trombone and of immersing him in the ancient rituals of Masonic beliefs. In return, the boy promised to practice faithfully and march and play in all the Elks parades. His lips fit just fine! Nearing the end of high school he could proudly proclaim that Jimmy Cheatham was his name and playing trombone was his game.
He knew that his life’s purpose would consist of two things – the search for excellence and to be of service. The time came around when Jimmy and his mentor took the city bus downtown to the music store to search for excellence—in the form of a brand new trombone. Mr. Smith told him the tale of the man who invented the King of the golden Horns—the Conn B-flat trombone.
Charles Gerard Conn was a Civil War veteran. “I’m not sure if he fought for the Blue or the Grey,” said Ray Smith, “But fight he did and got his lip split in a brawl in 1873!” He played coronet and had to invent a rubber mouthpiece to make it easy for himself to continue with “The Brick Brown Band” in Elkhart, Indiana. He’d learned too late the musician’s lesson that when embroiled in a brawl, do not lead with your lips! But, no fools – no fun. He’d become so famous for the mouthpiece that, along with a French instrument maker named Dupont, he enlarged his vision. Pursuing excellence, they produced prize-winning coronets, saxophones, tubas and trombones.
Jimmy Cheatham purchased one of Conn’s excellent trombones on the layaway plan. He did odd jobs and a stint on the night shift at an auto plant and made weekly payments on the horn. His last year in high school he earned the final payment by shoveling out a boxcar full of powdered sheep manure. He marched down to the music store and picked up his precious dream, the Golden Trombone, then he joined the U.S. Army and marched off to war.
Jimmy Cheatham found himself in great company—two world-class drummers were in his group—Chico Hamilton and “Papa” Jo Jones. They made a joyful noise near Birmingham, Alabama, at Fort McClellan.
After the war, the long road to excellence led the man with the Golden Conn to the New York Conservatory of Modern Music in Brooklyn, New York. He was assisted by the G.I. Bill.
The school was under the auspices of Al Sculco, or “Squeak” as his adoring students called him. The Master Teachers were alumni from the Woody Herman Band: Billy Baur, guitar; Don Lamond, drums; Pete Mondello, from Benny Goodman’s Band, too, saxophone; Tony Aless, piano; and last but not least, Jimmy found a lifetime friend in guitarist and arranger Frank Como.
Upon graduation from that illustrious professional school, still believing in the magic of music, the Golden Horn and its Master took the long leap of faith and traveled to Los Angeles, California, to attend the Westlake College of Music. He met another mentor, the brilliant Russell Garcia, who helped sharpen his already considerable skills in arranging and orchestration. He also met three men who were to become lifetime friends: Buddy Collete, flautist extraordinaire; Britt Woodman, who played a matching Golden Conn trombone; and Chico Hamilton, talented drummer; who had first touched his life in Alabama in the Army.
The Golden Horn’s slippery slide flicked its way sensuously through an operatic lab; a fundraiser given by the “Hollywood Ten” for Paul Robeson; the soulful solo in Dvorak’s New World Symphony (Going Home); and fiery jam sessions shoulder-to-shoulder with the legendary Louis Armstrong. It hung out in high places, arrangements for Lena Horne, written by Jimmy with Lennie Hayton, Lena’s husband.
The Golden Horn’s glorious ascent ground to an ignoble halt with the end of support from the G.I. Bill. Our hero had to return to the gloom and doom of that city of disappearing steel mills, Buffalo, New York.
Buffalo had become a black hole. The mills were closing and, with them, the night clubs were also. The voice of the Golden Horn was heard less and less in the land. Our hero was forced to coach vocalists and write an occasional arrangement in the spare room of the musicians union, Local 325. He began to despair of ever saving enough money to get back to the life he had loved in Hollywood. 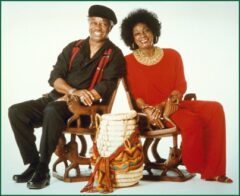 But all was not lost. Into his life strode a woman who not only headed up her own band, but played all the music he placed before her on the old union piano. Then she popped out eight perfect B-flats through the Golden Horn! The two became inseparable from that day forward. She helped him organize the good arranger-musicians and formed a monthly jazz showcase. Her name was Jean Evans, soon to be known as Jeannie Cheatham.
She knew that if they lingered in the Doomed City, the hopes and dreams of both of them would evaporate. She deftly maneuvered road trips for both of them, he with the “Bull Moose” Jackson Organ Trio, and she, accompanying a Swedish vocalist. Both road trips ended in New York City. The couple and the Swedish vocalist announced their arrival in the Big Apple by cruising down Broadway in the Swede’s lovely lavender Lincoln Continental!
Frank Como, Jimmy’s schoolmate, had established a production company and soon Jimmy and the Golden Conn were copying scores for, and performing with, “The Jimmy and Dean Show”, Broadway musicals and Long Island weddings. Chico Hamilton’s advertisement music company took wing with the addition of Jimmy’s playing and arranging, and there were road trips sitting beside Britt Woodman in Duke Ellington’s orchestra. Recommended by Bill Dixon, the Golden Conn and Jimmy started teaching at Bennington College in Vermont. Jazz History was the topic of the time.
It was Benny Powell, a great golden trombonist in his own right, who informed Jimmy that he would double his chances to work if he learned to play bass trombone. Benny Powell sold him the Holton Horn that would become Jimmy’s signature sound heard ‘round the world.
Frank Holton founded his company in Chicago around 1888. The horn was called the Holton Loyalist. He moved his thriving company to Elkhorn, Wisconsin, in 1918. Holton, too, was dedicated to the pursuit of excellence. The bass trombone has an additional section of tubing mounted in the bell section which lowers the first position pitch a perfect fourth. It is just as golden and as gleaming as a Conn, but there is more of it!
Jimmy had to make adjustments to play the bass trombone, but don’t forget those lips! The bass trombone had a rich dark sound. It was “Mae West” to the tenor trombone’s “Madonna”. The larger mouthpiece, huge bell, and two triggers made for a very distinct sound for the blues.
1972 brought a clarion call to academia. Jimmy, his family, and the Golden Horns moved to Madison, Wisconsin, to take Cecil Taylor’s place at the University of Wisconsin, teaching Jazz History, the Jazz Orchestra, and Jimmy’s creation, “The Experimental Improvisational Black Music Ensemble.” The new Big Horn barked orders and cajoled tears in a jam session run by the Cheathams at the Park Motor Inn on the Square.
After almost seven years, the Cheathams and the two Golden Horns wended their way west, back to Hollywood. But not for long. Jimmy was asked to continue in academia, this time at the University of California at San Diego.
South of Hollywood, the Cheathams continued their life work, providing a living school for aspiring musicians: The Jam Session. This school commenced on Harbor Island at the Sheraton Hotel. And they came—Billy Taylor, piano; Rufus Reid, bass; Nat Adderly, Charles McPherson, alto; Vi Reid, alto—a constant stream! A joyful noise! All led by the muscular piano and velvet voice of the Holton double-trigger trombone.
The Cheathams and the Holton Horn toured with the Grover Mitchell Big Band. They produced an award-winning special: Three Generations of the Blues with Sippie Wallace, Big Mama Thorton, and Jeannie Cheatham. And they toured with the Cab Calloway Big Band.
The good times rolled on! One of Jimmy’s trombone students brought Mr. Carl Jefferson of Concord Records down from the Bay Area to San Diego to hear the Cheathams.
They were signed by Concord records and the rest is history.
The Cheatham’s Sweet Baby Blues Band was created, consisting of:
Red Callender bass (Louis Armstrong Alumnus and teacher of Charlie Mingus)
Eugene “Snooky” Young, trumpet (Fletcher Henderson, Count Basie First Trumpet, Thad Jones, Mel Lewis, Benny Goodman, Doc Severinsen’s Tonight Show band)
Curtis Peagler, alto/tenor/bari (Ray Charles, Count Basie Bands)
John “Ironman” Harris, drums (Horace Silver, Blue Mitchell, Carmen McCrae bands)
Jimmy Noone Jr., clarinet/tenor (Teddy Picou, Daniel Jackson bands)
Charles McPherson, alto (Charles Mingus, Lionel Hampton, Dizzy Gillespie bands)
Jeannie Cheatham, piano/vocals/composer
Jimmy Cheatham, Holton bass trombone/arranger
They came from different places, bringing different styles, but all had a common thread: they were born with the soul of music!
The Cheatham’s Sweet Baby Blues Band rolled ‘round the world. The familiar, “One, two- You know what to do!” signaled the start of a smartly crafted show filled with joy and pathos, romping, stomping music, and humor, ending with their signature hit song, “Meet Me With Your Black Drawers On,” Jimmy’s big Golden Holton pointed to the top of the venue, then plunged downward to bring the band to a sharp, precise, theatrical ending. There was always a standing ovation, at which Curtis Peagler would utter the words, “Fooled ‘em again!” as they took their bows. The Cheathams’ motto was: “Nobody goes home feeling bad!”
The Grand Prix du Disc for Jazz, from France, was among the many awards won by the band. Today and The Tonight Show were spectacular experiences for Jimmy and the Golden Horn.
Standing side by side, the first horn and the last horn, the Conn, still in its original case, and the Holton, still in its custom-made red travel case, are silent now. Their Master’s full lips are still. Jimmy Cheatham exited the final stage January 12, 2007, in his favorite jacket, in his favorite chair, his partner onstage and off for over 54 years by his side.
He did not go home feeling bad.
His music will live forever.
—Jeannie Cheatham