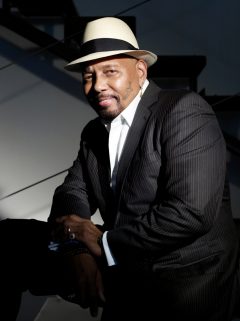 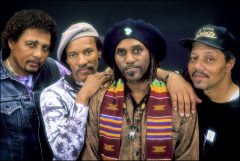 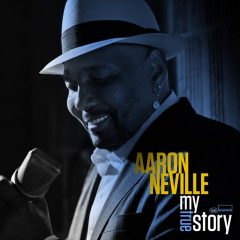 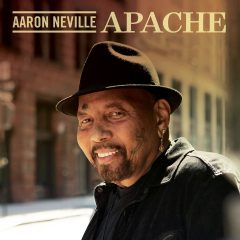 I was born in the southern land
That’s where I became a man
My roots was down in New Orleans
The birth of jazz and voodoo queens
From the heart of Louisiana
Marie Laveaux and Mojo Hannah
Grew up on the music of the streets
Second line bands and the Indian beats
–Aaron Neville, from “Stompin’Ground”

When Aron Neville of the Neville Brothers was a small child in the late 1940s, he and his family lived in poverty. Like so many children of the era, he loved going to the movies. It was there he found a true musical love and heroes. First and foremost, among them were Roy Rogers and Gene Autry; he sang along with the singing cowboy stars on the silver screen. He would go home, grab a mop-stick, and then turn into his horse, Kemosabi.

He grew up with his three brothers in the New Orleans projects, in what he describes as a protected environment. By all accounts, it was a happy childhood for Aaron and his brothers, where they were shielded from the outside world where racism and inequality ruled.

Of course, Neville’s love for music didn’t exclusively come from the singing cowboys of his childhood. He was born to a merchant marine sailor, Arthur Neville, and his mother, Amelia. Aaron acquired his love of music from his mother, who he describes as a wonderful woman. She sang to the brothers throughout their childhood. Like many in New Orleans, the family was multi-racial; a mix of African-American, Caucasian, and Native American–the Choctaw tribe.

The end of this story has Aaron and his siblings–Art, Charles, and Cyril–forging their way from the mean streets of New Orleans to the cradle of the best in jazz, rock ‘n’ roll and rhythm & blues. They have become a legendary band of brothers in arms who are recognized internationally as the best in American music.

What engages is all that has happened since their early days in the Calliope Projects in central New Orleans. Although it deteriorated into an area riddled with crime, during the brother’s childhood it was deemed a place for working class families to find decent housing as they moved up the work and career ladder to something better. But, upward mobility was not a common thing in the projects. So, the Neville family went through severe growing pains before success came along.

When the family moved from the projects as Aaron was turning 13. Soon afterward he became a known as a street fighter around the neighborhood. His reputation was so fierce he was given the nickname Apache. Ironically, in his sunset years, at age 76, he recorded his first album of original material: 2016’s Apache, which might be considered his masterpiece. It reaches back to those rough days he experienced.

Apache is intimately autobiographical in its scope, especially when it comes to the misbegotten way Aaron spent his teen years. At age 17, he was sent to prison for stealing a car. While he was locked up, he realized that his size–he’s 6’4″ and 120 lbs–and his soft-as-silk voice could work to his advantage out in the world. So, after he was released he used it to his advantage. The brothers played the city park near their home in the projects. As they improved, word got out around the Crescent City about these young guys and their talent. Soon, Aaron was the brother that displayed the most vocal talent.

It was the era of doo-wop, a style that lent itself to the kind of vocals that would come to highlight the Neville Brothers’ sound. He learned his craft from the homemade doo-wop group that his older brother Art started with friends.

Musically, the turning point for Aaron was hearing gospel singer Sam Cooke as a young teenager. He was used to hearing the often loud and preachy gospel singers in the South, but Cooke’s smooth way of singing became Aaron’s greatest vocal influence.

In 1966, his first hit single, “Tell It Like It Is,” made it to #2 on the national charts. In 1977, when the Neville Brothers formed as a band, Aaron was already an established solo artist. His next chart-topping song was the hit duet with Linda Ronstadt, “I Don’t Know Much.”

In the years that followed, Aaron successfully navigated a solo career and as a member of the Neville Brothers. He has produced a string of excellent solo albums that improved with each release. They have included jazz, rhythm & blues, country, and gospel albums. In 2012 he released My True Story, which allowed him to visit his past influences. Produced by Don Was and Keith Richards, My True Story includes songs like “Tears on my Pillow,” “This Magic Moment,” and “Under the Boardwalk.” On his website Aaron wrote, “These songs helped to mold me into who I am. They’re all dear to my heart, and they rode with me, in my bones, through all these years.”

His latest album, Apache, is perhaps his most musically and lyrically creative, with all songs written in collaboration with his producer, Eric Krasno, and Dave Gutter. It feels like a work that could easily have been released during the most inventive peak years of Stax, Muscle Shoals, and Motown. “Fragile World,” takes us on a ride through the hazards of the 21st Century with a plea for love to prevail. It’s performed spoken word-poet style with intricate jazz instrumentation.

As with any artist, the personal fuels the professional life. For some it can be conflictual. For Aaron, while experiencing his share of tragedy, his personal choices have supported his creativity. He was married to Joel in 1959, a relationship that would inspire him until her death of cancer in 2004. It was a devastating loss for him. However, he was able to find another inspiring partner with photographer, Sarah Friedman, whom he married in 2010.

One major area of his life that is not recognized is his faith. One of the influential forces in the projects where he grew up was a St. Monica’s Catholic Church and School. It influenced him for the better as Aaron has remained a devout Catholic. He says his life is dedicated to St. Jude, the patron saint of hope. He credits the saint with his success. Today, he wears a St. Jude medal as an earring. He also has a facial tattoo of a cross.

The Neville Brothers band retired in 2012, but they reunited for a 2015 farewell concert in New Orleans. The final blow, however, to the brothers as a band was the recent death of brother Charles. In many ways Aaron’s older brother defined and gave his signature to the instrumental sound he brought to the band. He was diverse, wild, passionate, and always full of joy as he performed. Aaron released the following statement on his Facebook page following Charles’ passing. It is an open declaration to his late brother: “Just want you to know that if I would’ve had the choice of picking my brothers, I would definitely choose you… You’ll always be in my heart and soul, like a tattoo. You helped to mold me into who I am today and I’ll always be thankful. I’ll always see your special infectious smile on the stage next to me, it would always give me a smile.”

In an interview with Dan Rather, Aaron was asked what he would put on his bucket list. Aaron bristled and look good-naturedly defiant. “You know, a bucket list suggests that your about to leave. I’m not ready to leave, so I don’t have one of those.”

We hope he continues to be true to his word. Today, he appears to be hitting a new stride that will extend his legacy and contribute to the great American music he has loved throughout his life.

The Aaron Neville Duo comes to the Belly Up Tavern in Solana Beach on Wednesday, June 27, at 8pm.

From Downey to Lubbock: Dave Alvin and Jimmie Dale Gilmore