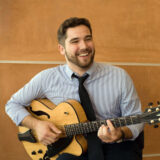 Meet Zack Caplinger, one of the finest young jazz guitar players in Southern California. It’s true, although Zack would never describe himself that way because his skill is outpaced only by his modesty. Zack grew up in the Vista area of San Diego, the son of acclaimed multi-instrumentalist Dennis Caplinger. Dennis instilled a reverence for music in Zack at a young age that has never left him. Zack’s two sisters, Melissa and Rachael, also reflect the powerful musical genetics of this remarkable family. Melissa, Zack’s older sister, was active in choir and theater and Rachael, his younger sister, developed singing and piano skills. His mom, Elizabeth “Libby” Caplinger, taught preschool and still does.

Early years: Learning at the Feet of the Greats
As a youth Zack followed his famous dad to bluegrass festivals, recording gigs, studio engagements, and more, learning to play bluegrass guitar and how to navigate the world of bluegrass and acoustic music. Zack is the first to acknowledge that he owes most of his musical success to the influences of his father, not just musically, but also life lessons and how to be a good person.

By way of example, Zack remembers travelling cross country as a youngster in a van with his dad and acclaimed upright bass player Bill Bryson. The trip was like attending Bluegrass University on the road, taught by two of the very best, both willing to share their musical knowledge with the young Zack: their humor and their respect for music and each other. Zack acknowledges with humility and gratefulness how much he learned from his dad and his musical friends by having access to backstage at festivals, joining road trips, attending concerts, and sitting in on practice sessions. Zack took advantage of it all, learning from watching and listening to many of the greats. Being accepted inside their world at a young age was transformative.

Dad Dennis was also a great teacher, which I can attest to, having taken several workshops from him. Zack reports that his father was equally available and approachable at home as a teacher, always setting high standards and always available. It’s from Dennis that Zack learned how to practice, how to collaborate musically with other musicians, and how to navigate the business end of the music world with humor, grace, and the right mixture of dedication and seriousness.

The Jazz Bug Bites
With his extensive background in bluegrass music, it was in high school that Zack was first smitten by jazz. While he has never left his bluegrass roots, he joined his first jazz band in high school. Looking back, Zack recognizes that the technical proficiency he learned playing bluegrass guitar, especially the speed and dexterity required, has served him well on jazz guitar. He notes that both bluegrass and jazz tend to be aurally based music and gives credit that his early bluegrass training helped him enter the jazz world smoothly. He comments that while neither bluegrass nor jazz is “better,” both are challenging and rewarding; bluegrass tends to be diatonic while jazz is typically more complex.

After high school Zack went to Riverside Community College to study music and jazz, receiving his AA degree in music. From there he transferred to Cal State Fullerton, earning a B.A. in jazz performance in 2018. Zack credits Ron Eschete as one of his most influential teachers, a living legend himself. And, he nods to world-renowned Grammy-winning jazz pianist and head of the Cal State Fullerton Jazz Department, Bill Cunliffe, for drilling him on the serious side of jazz rhythm guitar.While studying and learning during his college years, Zack was a regular performer, playing in lots of groups and pick-up bands performing all kinds of jazz, from Latin to classical to avant garde. As one memorable experience, he points to his senior recital at Cal State Fullerton. Here’s the background: Zack had learned to play the beautiful Tony Rice tune “Waltz for Indira” from his dad. For Zack, learning this great piece, which was written and made famous by one of Zack’s most inspiring bluegrass guitar icons was an important life moment. To perform it for his senior recital in front of his dad, mom, sisters, and friends was an unforgettable experience. Zack reports it still brings back strong memories and chokes him up every time he performs it, as both his dad and Tony Rice are now deceased. 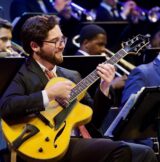 Zach playing in the jazz orchestra.

Zack is currently living in Fullerton, South of L.A., which he describes as centrally located for his performance opportunities that take place in L.A., Orange, and San Diego Counties. He’s making a successful go at a career as a full-time musician, performing mostly jazz, typically as a sought-after sideman but also performing some bluegrass and doing some teaching as well.

So far, he has not tackled jazz singing, although he performs with many skilled singers, and he doesn’t rule out dabbling in it someday. He remains an accomplished bluegrass singer and continues to enjoy that. He describes his interests as broad based and notes that he loves the challenge of learning new styles. In his personal life he is partnered with a singer named Teryn Re, also a skilled musician, who is an aficionado of Big Band music arranging. The two met at shared gigs.

Goals for the Future
Zack loves what he is doing. He would be excited, someday, to produce a recording of his own featuring his original music. Perhaps a solo or duet project? Related to his recording aspirations, Zack is now the inheritor of dad Dennis’s extensive home studio, and he expects to be learning the ins and outs of all the gear and doing some recording with those assets.

As for what he plays, Zack has a Bill Comins archtop guitar with slight modifications that he considers his “go to” instrument. While he recently sold his telecaster, he is fixing up his dad’s telecaster and expects to perform with it soon. For his bluegrass gigs Zack loves his Illusion guitar, hand-crafted by local craftsmen Jeff Scott and Corky Shelton in the small boutique custom guitar shop founded by Scott in Fallbrook. Zack also has a tenor banjo, but not the five-string bluegrass type, which he dabbles with; he also plays a bit of mandolin.

Through it all, Zac is forever grateful for how special it was to have had Dennis as his father and how meaningful it is to him now to have his dad’s instruments and recording gear, along with the many words of wisdom and learned experiences passed on by Dennis to carry him to his future. As Zack said to me about his relationship to his famous dad:

It is an honor, and any success I have in music is due in large part to him,
and I am grateful to be associated with his legacy.

By all indications, Zack Caplinger’s future promises to be full of success. We look forward to watching him continue to grow and succeed. In addition, we can’t wait for that first recoded solo project that we know will be outstanding.

To learn more about Zack Caplinger and to hear his music visit his website at: https://www.caplingermusic.com/

Dwight Worden plays upright bass with the Prairie Sky band and is also the mayor of the city of Del Mar. He is a regular contributor for this publication and writes the monthly column the Bluegrass Corner.