December 2022
Vol. 22, No. 3
The Return of IPO San Diego: After a Five-Year Local Hiatus, David Bash’s Unique Music Festival Makes a Much-Anticipated Return by Scott SamuelsJuly, 2022
Harold in the Land of Jazz by Bart MendozaJuly, 2022
Sephardic Dance and Music by Yale StromJuly, 2022
Loretta Lynn: A Special Tribute to the Queen of Honky Tonk by Terry Paul RolandJuly, 2022
Ben Grace Gilmore: It's All About Building Community by Sandé LollisJuly, 2022
The Jazz Lounge: A Listener’s Paradise by Laura PrebleJuly, 2022
SVEN-ERIK SEAHOLM: Looking Forward by Bart MendozaJuly, 2022
SURE FIRE SOUL ENSEMBLE: A Conversation with Tim Felten by Robert BushJuly, 2022
Real Chicago Blues Is Coming to Humphrey’s Backstage! by Eric LiebermanJuly, 2022
A Walk with Mary by Chuck SchieleJuly, 2022
Advertisements 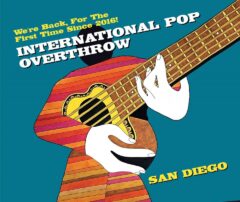 As any musician or live music fan will tell you, the past few years have almost seemed like an eternity. And now that live music has staged somewhat of a comeback, albeit with an altered and slightly more limited list of venues, the musical air is full of excitement—the excitement of gathering together to perform and to listen to live music. When you get right down to it, music is all about connection.

Few music events typify music’s connecting power and sense of community as much as the International Pop Overthrow (IPO) Festival, a pop music festival that was born in Los Angeles 22 years ago and has spread to cities and venues all over the world. In every city that has seen the return of IPO so far this year—Phoenix, Chicago, and Liverpool—audiences and artists are rejoicing over the ability to reconnect and once again share their love for the rock ‘n’ roll experience that IPO is known for delivering. 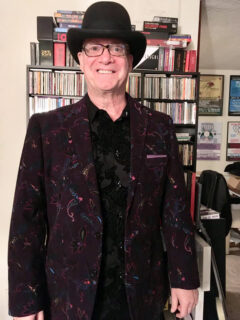 San Diego is up next, where a two-night version of IPO will take place at the Black Cat Bar on July 8–9, featuring an impressive list of 11 of the top purveyors of jangly, tuneful, and power-pop inspired rock ‘n’ roll. Many are artists who “fly under the radar” when it comes to the local music scene, but their songs and artistry are no less compelling than bigger-name San Diego staples.

The Itinerary
Friday, July 8 opens at 7pm with Steve Rosenbaum, whom David Bash, IPO’s founder and coordinator, refers to as “a great popmeister.” Rosenbaum has played several IPOs in recent years and cites the Banana Splits as his chief songwriting influence.

Courtney McKenna, an LA indie-folk artist who often plays in San Diego, is up next. She combines poetic lyrics with the sounds of classic rock, Americana, and country; she is making her first IPO appearance.

McKenna is followed by (the author’s) the Scott Samuels Band. Samuels was the songwriter and driving force behind Roxy Monoxide, a noted San Diego power-pop band. He has played several IPOs in San Diego and Los Angeles, both with Roxy and as a solo artist. Bash has praised Samuels’ music for its lyrics and melodies and has described the artist as a “great supporter of IPO.” 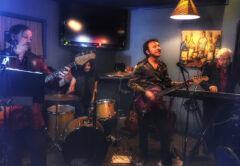 Scott Samuels and the Vinyl Pirates.

Longtime San Diego favorites the Nephews are next on the evening’s itinerary. Bash describes their music as fun, quirky power pop. Sweet Myths follow, a band that marries the sounds of funk and progressive rock.

Ending night one are San Diego staples Super Buffet, IPO veterans who are known for their clever and catchy combination of garage and power-pop music. No doubt their set will begin and end with their sing-along anthem “We Are the Super Buffet.”Night two (July 9th) kicks off with Casino Spanish Eyes, a new band featuring Matt Mincey, formerly of IPO veterans Suite 100. Bash describes Mincey’s new band as “sophisticated stylish pop—a pure joy.” Next up will be Night Swims, a band that recently released its first album Idle/Wild and specializes in dark, anthemic pop.

Third on the bill is Tamar Berk. “I’ve known Tamar since she played IPO Chicago several years ago. Her sound is very edgy, kinda riot grrrl-inspired, but with fine pop melodies,” Bash explained.

Tamar is followed by Bart Mendoza’s band, True Stories. Troubadour readers who follow the local San Diego music scene to any degree (author’s note: that is probably redundant!) are certainly very familiar with Mendoza, not only as a longtime legend of powerpop but also as a tireless music journalist and supporter of the entire San Diego music scene.

Following True Stories is Hector Penalosa, main man of the highly noted ’80s power pop band Flying Color, who is also well known as an original member of the Zeros, Squiddo, the Baja Bugs, and several other bands. No doubt he will be playing songs from his new solo album, My Beautiful Tragedy.

Bash summarizes the two-night line-up as “eclectic and very pleasing.”

IPO, Post Pandemic
After a nearly two-year pandemic-related hiatus on IPO Festivals all over the world, Bash describes his feelings about the return of IPO as “a combination of joy and relief.”

“It was really hard on so many bands who get fulfillment from playing music to be unable to do so, and I imagine that to play again is, and will be, a huge catharsis,” he said. “I certainly greatly missed IPO in 2020, and most of 2021 (we finally got going again in September of that year); I don’t think I realized just how much I missed it until our first night back. The audience response has been wonderful ever since we got back to doing IPO, in every city we’ve done them. I’m sure people were absolutely craving to get out and see shows, and I’m very glad we’ve been able to help with that.”

And for San Diegans, the wait for the return of this event has been even longer. It was five years ago that the last of seven annual San Diego IPOs took place at the Chico Club. The club was then owned by the now-retired Larry Fox, a great supporter of live local music, who saw the value in providing a San Diego home for the festival in 2015 and 2016.

A Personal Perspective and Some History 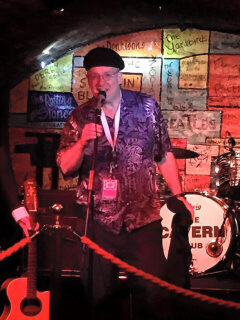 MC David Bash at the Cavern Club in Liverpool, 2015.

Though not an unknown genre to me, I’d never really thought about how to classify the music I’d been writing and playing. But Hector’s comment really hit home, and I reached out to David Bash that week. Soon Roxy Monoxide were booked to play our first Los Angeles IPO, an afternoon slot at the fairgrounds in Stanton.

That first event opened a new world for me and others in my band. I will never forget listening to Sal Valentino of the legendary Beau Brummels and then talking about music with him afterwards. Or hearing the Pop Dudes playing a very fun, rocked-out version of ABBA’s “Waterloo” to end their 2006 IPO set. There was a great camaraderie amongst both the bands and the audience. And as Master of Ceremonies, curator, and booker, David Bash was the one bringing it all together.

Back in 1998, he had quit his job teaching at a community college to create a large music festival in Los Angeles, focused on the hook-laden rock genre known as power-pop. He named the event as an homage to power-pop trio Material Issue’s critically acclaimed album International Pop Overthrow.

Over the first few years of the event, power-pop artists and fans came from far and wide to perform at the Festival, and it rapidly became clear that many who would otherwise participate were not able to the make the annual trek to LA. In 2001, the first IPO outside of LA took place in New York and, in 2003, the event expanded to Liverpool, where it is held each year at the venerable Cavern Club. Before the pandemic shut down musical events, IPO was being held in 13 different cities.

International Pop Overthrow’s importance in the pop music realm is no better illustrated by the 2011 Chicago appearance of “Material Re-Issue.” That year, on the twentieth anniversary of Chicago-based band Material Issue’s International Pop Overthrow album, the surviving members decided to reunite, performing their landmark album at Bash’s event. “It was a big moment not only in the history of the festival but also in the history of the band,” Bash said. 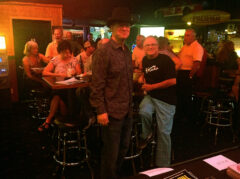 Troubadour contributor Steve Thorn, with David Bash, is a huge fan of IPO.

Perhaps more than anything, International Pop Overthrow has always been a great place to discover new music, as evidenced by the critically acclaimed multi-disc CDs that are released each and every year, featuring artists who perform at the festival. Curated by Bash, many of these have become sought-after artifacts by collectors of power pop music. In recent years, he has expanded the musical palette of the festival and the CDs to include many pop-related genres of rock ‘n’ roll.

While power-pop aficionados often debate on social media as to whether a particular song or artist is or isn’t “power-pop,” David Bash, with invaluable help from his wife Rina Bardfield, uses his encyclopedic knowledge and finely tuned ears to continue to present consistently enjoyable musical events. He promises that “if you like melodic rock ‘n’ roll music, you will find much to love at IPO San Diego!”

The International Pop Overthrow Festival, San Diego edition, takes place July 8th and 9th, from 7pm to midnight at the Black Cat Bar, 4246 University Avenue, San Diego. There is a $10 admission for each night of the event.

Zach Caplinger: A Gifted Musician in his Own Right

This Saw Is Not a Tool