December 2022
Vol. 22, No. 3
This Saw Is Not a Tool by Derek ShawJuly, 2022
Harold in the Land of Jazz by Bart MendozaJuly, 2022
Sephardic Dance and Music by Yale StromJuly, 2022
Loretta Lynn: A Special Tribute to the Queen of Honky Tonk by Terry Paul RolandJuly, 2022
Ben Grace Gilmore: It's All About Building Community by Sandé LollisJuly, 2022
The Jazz Lounge: A Listener’s Paradise by Laura PrebleJuly, 2022
SVEN-ERIK SEAHOLM: Looking Forward by Bart MendozaJuly, 2022
SURE FIRE SOUL ENSEMBLE: A Conversation with Tim Felten by Robert BushJuly, 2022
Real Chicago Blues Is Coming to Humphrey’s Backstage! by Eric LiebermanJuly, 2022
A Walk with Mary by Chuck SchieleJuly, 2022
Advertisements

Aaaaah, the singing saw. With the delicate tone of an angel’s cry, the saw has been enchanting unsuspecting audiences for generations. Similar to the sound of a Russian theremin, the saw can be manipulated with heavenly intervention to mimic the delivery of falsetto fantasia from a 1940s flapper…high and pulsating, airy and penetrating.

If you’ve never heard this winsome wonder of nature, just go to the old shed and pick up a carpenter’s blade. That’s right, an average wood-cutting blade is preferred many professional sawyers over specially constructed musical saws.

First, place the saw between your legs with the teeth facing you. If razor sharp metal is something that makes you squeamish, teeth out will suffice. Next, bend the blade into an S-curve and find that fabled sweet spot in the middle where vibrations are the flattest. If you don’t have a cello bow handy, you can fashion your own mallet out of a wooden dowel or spoon. 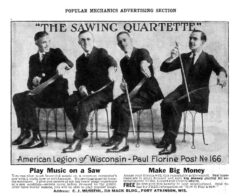 Ad from a 1922 Popular Mechanics magazine.

Harmonics are created at varying distances from the sweet spot, and controlling the pitch is as simple as adjusting the S-curve. Making the sweet spot travel up the blade toward a thinner width will produce a higher pitch. Conversely, moving toward the handle generates a deeper tone. More experienced sawyers are able to add vibrato by shaking a leg or wobbling the top hand that holds the tip of the blade.

You’ll be surprised how long the sound is sustained, and eventually you can learn to carry it through several notes of a phrase. Its music classification is technically an idiophone because it self-vibrates without the use of strings or membranes. Other than the human voice, or animal sounds, the first instruments were likely idiophones.

Much like its quavering, mysterious tone, the singing saw’s history is shrouded in mythology. The singing saw wasn’t popularized until the 1700s and lacked wholesale manufacturing until the 1900s. However, there are images dating back to the third century depicting the Chinese playing musical saws.
While some connect the saw’s origins to the Ozark and Appalachian Mountains, brought to America by African slaves, others associate its conception to Scandinavian laborers and even the South American lumber trade.

Perhaps the most famous tale is of Pennsylvania lumberjack John Schmidt, who is rumored to have dreamt up the idea. According to legend, he received a request from his favorite blade one night. The saw pleaded, “John, my back itches something awful. If you just scratch it, I’ll hum some of the most beautiful music you’ve heard this side of heaven.”

More than likely, the musical saw was developed simultaneously on several continents in the context of many different cultures. The first tones produced with a metal blade were probably associated with accidentally dropping a saw, striking it with another dense object, or the playfully waving a blade in the air.

One of the first famed sawyers was Swedish performer Martin Larrson who created a media storm in Paris by playing the saw. Once, he was pressed to perform under a bridge with a bun stuck in his mouth so as to dismiss accusations that he was whistling rather than coaxing melody from the saw.

Charles Hindmarsh is the contemporary equivalent, widely known as the Yorkshire Musical Saw Player. Natalie Paruz, the Saw Lady, has performed with orchestras and in subways, on movie soundtracks and TV commercials. The saw has been integrated into a host of musical traditions from folk and blues to swing and classical.

The saw phenomenon swept the United States during the early twentieth century. At least ten companies made their own singing saws domestically, which ranged from standard steel to limited edition gold-plated models costing hundreds of dollars.

In the 1930s novelty bands like Bob Skyles and the Skyrockets used the saw to accompany their vaudeville of showy dance numbers. Traveling showman Leon Weaver performed saw music to adoring audiences across the South with his Okie group.

The first American saw marketer, Mussehl & Westphal, sold over 30,000 units annually through the early 1930s. Operating out of rural Wisconsin, it’s one of only a handful of American companies still manufacturing musical saws.

Unfortunately, the Great Depression and World War II dampened the demand for metals. Despite the fact that actress Marlene Dietrich entertained troops with her saw playing during the war, mass production of musical saws became obsolete and unaffordable, leading to a decline in the instrument’s availability and application.

Depending on the grade, gauge, and temper of the metal, musical saws have acoustics and capabilities of wider range, richer tone, stronger harmonics, and greater sustain. They are generally built wider and longer than standard saws for increased range and finer control. They can also be designed thinner to increase flexibility.

The average saw is about five inches at the handle and one inch at the tip. It’s designed to produce two octaves of range regardless of the blade’s length. A bass saw is the exception with a six-inch handle and a range of two and a half octaves. Two-person saws or “misery whips” are still produced but possess a very limited accuracy and range. 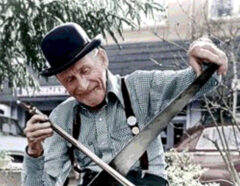 A popular revival in roots music has spotlighted the saw once again. The International Musical Saw Festival has been held every August for nearly three decades in Felton, California. Tucked in the wooded hills of Santa Cruz County, this historic logging town hosts professional sawyers from around the world.

Canadian sawyer Robert Minden has toured and recorded for more than two decades. He first learned the instrument in Santa Cruz from street musician Thomas Jefferson Scribner. Once referring to the saw as “the lost sound,” Scribner’s saw-wielding image is now immortalized by a statue in his hometown.

A man in St. Petersburg, Russia, playing “My Way” on the saw.

Over the past 15 years, the musical saw has been revitalized in movies, music, and art. French filmmaker Jean-Pierre Jeunet’s fabulous black comedy Delicatessen frequently featured the main character playing the saw.

Innovative fusion bands are now combining folk, blues, jazz, bluegrass, and rock to form a refreshing sound. The Asylum Street Spankers out of Austin, Texas, have enticed audiences for over a decade with organic jams led by Christina Marrs who plays both banjo and saw on stage. 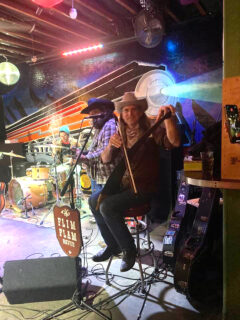 Drew Douglas plays the saw at one of grampadrew’s Flim Flam Revues at the Whistle Stop. Photo by Liz Abbott.

Few mainstream artists have utilized the obscure instrument, but Sarah McLachlan highlighted the saw on the composition “Last Dance,” and even rap-metalhead Korn employed the saw during their recent MTV “Unplugged” set.

Reprinted from the July 2007 San Diego Troubadour in conjunction with the Museum of Music’s Singing Saw exhibition.