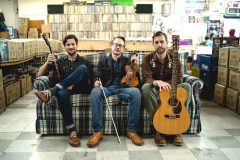 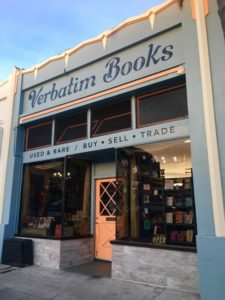 Southern Pacific Sessions has announced upcoming concerts in early 2020 in North Park, including a unique opportunity in January for attendees to square dance with a veteran caller and live music—no experience required. In February, they will feature an appearance by the St Louis Steady Grinders, an old-style piano and vocal band specializing in barrelhouse blues with a St Louis vibe. Local promoter/Americana musician Clinton Davis is putting the shows together, with the square dance on January 24 at at Verbatim Books Store in North Park. The show will feature music by the Clinton Davis String Band and caller Robin Fischer from Oakland, who has called dances at big festivals, including the Berkeley and Los Angeles Old Time Music Conventions. A suggested donation of $10 will provide an opportunity for square dance beginners of the dance to mix with veterans.

“It’s just a good old-fashioned dance party,” says Davis. “Bring a friend or two or ten. Or come alone and make new ones.”

For the February 23 show, also at Verbatim, the Steady Grinders will be making a local appearance, a band that has performed all over the country and Europe in the last five years. Featuring noted blues pianist Ethan Leinwand and vocalist Valerie Kirchhoff (aka Miss Jubilee), the band breathes new life with foot-stomping piano and powerhouse vocals, keeping the St Louis blues alive and bringing effortless authenticity back into a forgotten repertoire. The show begins at 8pm, with suggested donations on a sliding scale from $10 to $20. Tickets will be available at the Southern Pacific Sessions website (southernpacificsessions.com).
Davis explains that the two shows are in many ways an experiment—to see the response at a new venue. He is a Kentucky native who has been part of the local acoustic scene for ten years; he completed a PhD in music at UCSD in 2016 and has played as part of his Clinton Davis String Band as well as solo. He has also been making studio appearances on recordings of other musicians, working with recording engineers and producers. Not only does he play banjo, fiddle, guitar, piano, mandolin, and harmonica, he also teaches lessons professionally on multiple instruments. At risk of being termed an “anything with strings” whiz, he has won first prize in the fiddle competition and took second in banjo at the 2019 Santa Barbara Old Time Fiddler Festival, after taking the top spot the year before in banjo. He is a virtuoso with a commitment to traditional music.

“The artists we have and as a musician myself, what I’m personally interested in is studying music that has a narrative and a connection to the past,” says Davis, “music that provides some insight into history, into culture. In some parts, like where I come from in Kentucky, into Appalachia and the South. But also, music that provides a connection to any part of American life. It inspires you to look at the world in a different way.” He cites artists that were promoted in the past year that included a group, Lone Piñon, playing old time music from New Mexico. Other performers have included Mara Kaye, the Horsenecks, Richie Stearns and Rosie Newton, and Blake Miller the Old Fashioned Aces, a Cajun group that features Grammy-nominated accordionist Miller.

Davis takes a lot of pride in the roster of artists that have played at his concert series. As part of an extensive tour during the summer, he attended the prestigious Appalachian Sting Band Festival in Clifftop, West Virginia. While there, he noted that the three top finishers in the fiddle contest were artists that appeared in the SPS concert series in the last two years.

While the concert series has branched out in terms of styles of music, going beyond strictly traditional, and though Davis as a performer can play with amplified instruments, his interests are “more about tradition and culture than original content.”

Southern Pacific Sessions got its start in 2017, when Davis was interested in building a bridge first with the Los Angeles Americana community and later San Diego, with a concert series. He teamed with Nick Montemarano and SPS was born, with some input on the name from both co-founders. In addition to playing mandolin in Davis’ trio, Montemarano is a freelance videographer and is responsible for the production of YouTube videos that are a critical part of the SPS promotional efforts.

“Nick runs the video production side of things,” Davis noted. “It was his idea to start a YouTube channel.” The emphasis on video has enabled advertising not only for the concert series, but for San Diego as a destination for touring artists.

“We record the whole show, audio and video, then work with the artist to select one tune that we can edit into a polished YouTube piece. Then, hopefully, the artist will share it, and fans of that artist will see that the video was shot in San Diego. And other performing artists will see it and have a clue about when they want to tour the West Coast, and who to look up in San Diego and help put on a show.

“The bottom line is that a room where you put on a show can hold 50 or 100 people. It doesn’t take that long to reach that many people with a video, and they stay up [online] forever. It’s definitely an investment, and it pays off.” Some of the videos put up so far have had over 1,100 views.

The new promotion company put together a number of shows in 2018 and 2019, using the Kalabash School of Music and Arts in La Jolla as a venue. Davis gives a nod to LA-area banjo and fiddle player David Bragger of Old-Time Tiki Parlour for helping send touring talent to San Diego. The Southern Pacific Sessions video channel now features 10 videos and is growing. The response has been good.

“We have had full rooms at the gigs. We had a really great run at Kalabash with most of the shows, and we had a lot of the people coming back.” The new location in North Park is being tried out after the concerts to date resulted in an old-time music community located mostly in North County. The feeling is that the demographics of a younger crowd of artists and listeners from the central city area were more amenable to a location South of La Jolla. Thus, the shift for now to Verbatim Books is an experiment to see about building a broader audience, which Davis is interested in and inspired by hearing old time music, as Davis puts it, “right in the middle of North Park.”

In addition to the concert series currently planned in early 2020, more are likely to be planned should the new venue experiment work out well. The square dance set in January, in particular, is a new idea that has Davis excited.

“I’ve wanted to do a square dance forever. And it will help us introduce the concert series to the North Park/central San Diego scene. As an event, it’s participatory, it’s novel, and, of course, it’s super fun. My hope is that it will pull in a much larger audience than a just a concert would. If it goes well, maybe we’ll be able to do square dances on a regular basis. We’re trying to make this as simple and inviting for the North Park community as possible.” He emphasizes that including Fischer as a caller means that no experience square dancing is needed; the caller tells the dancers what to do for the duration of the dance.

“Nobody knows what to do beforehand and literally anyone can do it. The learning curve is very gentle.”

Going forward, Davis would like to see opportunities to book performers that play all over the West Coast as well as the rest of the country. “We’d love to have the Foghorn Stringband come down to San Diego and performers like Jerron Paxton. What we’re trying to do primarily is bring artists in that tour the country. Artists of a very high caliber.”
http://clintonrossdavis.com is Davis’ personal performance website.