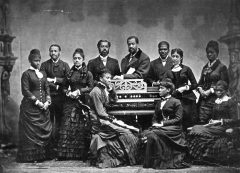 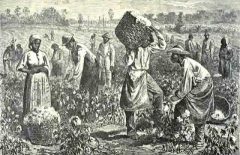 Whether you call it the “good” book, Torah, Five Books of Moses, or just the Old Testament, the text, poetry, and stories of the Bible have given comfort to millions of people for over two millennia. One group of people that found solace and strength from the Old Testament’s text were the African-American slaves. Slavery began in 1619 when 19 Africans were brought to Jamestown, Virginia by English privateers who plundered a Portuguese slave and ended officially on June 22, 1865 when the Civil War ended. Though President Abraham Lincoln signed the Emancipation Proclamation through executive order on January 1, 1863, it was not until the Civil War ended and the remaining regions of the South were fully under the control of the Federal troops that all slaves in America were officially freed. The Africans and their African-American ancestors who were enslaved for 246 years gave America many things that has influenced the fabric of American culture—especially our music.

African-American music begins its journey from when the slaves were captured and had to endure the “middle passage” to crossing the Atlantic and landing in America. The cultures from which they were torn and the living conditions into which they were forced both contributed to the sounds of African-American music. Slaves were forbidden to speak their original languages and were generally converted to Christianity. Because slaves were not allowed to express themselves freely during the week while working, it was during Sunday worship when they sang, danced and played music. Their music was shaped by where they came from in Africa, which also contributed to the varying styles of singing and instruments that were played. Historians say that as much as 30 percent of African slaves came from the Sahel regions, which were predominately Muslim and had been in contact with the Arabic-Islamic world. The other 70 percent were Africans who were non-Muslims from the Western and Central regions of Africa. The Sahelian slaves generally played string instruments, flutes, and sang while the western and central African slaves preferred drums and group cantillation. The string instrument introduced by the African slaves of Muslim ancestry was the fretless banjo (similar to the akonting from Senegal and Gambia). The Sahelian slaves came to America with their traditions of melismatic singing (bending the note of a syllable while it is being sung), quarter-tone intonations, elongated notes, long pauses between sentences, glissandos, and a certain nasality, which were all characteristic features of reciting and singing in the Islamic world. As ethnomusicologist Bruno Nettl described it, “Middle Eastern singing is tense-sounding and has a harsh, throaty, nasal tone, with a certain flatness.” The non-Muslim slaves developed their tradition of drumming and Griot storytelling into call and response singing. The plantation owners forbade the use of any kind of drum because they were afraid that slaves might communicate to each other from different plantations and plan a revolt. Consequently, the slaves created percussion by playing the bones, (originally made from animal bones), and the body they referred to as hambone-ing (sometimes “Pattin’ Juba”), which included rhythmic hand clapping, body and thigh slapping. Consequently, during the long arduous journey from Africa to America known as the “middle passage,” there was a Pan-African synthesis that began on the slave ships and eventually evolved into even greater syntheses in America. In places where there were heavy concentrations of enslaved Africans from a single ethnic or national group, the music and dances of these peoples would come to dominate the musical and dancing practices of their community. However of all the instruments slaves used to relieve their constant pain, most immediate was the voice. Singing provided solace and was also a community-builder and rally for hope during enslavement and afterward, in the days of Reconstruction and Jim Crow.

Early slave songs, known as spirituals, were adaptations of the hymns that new slaves were taught during Sunday worship. Spirituals served not only as a means of education and worship, they gave the community a way to express its deepest aspirations for freedom and social change. By the 19th century, the songs were used as covert communication often signaling impending escapes or secret gatherings. Although the spirituals recounted the brutal realities of slavery, they also reflected an enduring legacy of hope, determination and unwavering faith. Selected biblical stories and images constituted a distinct “slave canon” that drew heavily upon the Old Testament. They identified with the biblical narrative of the plight of the ancient Hebrews, who were the children of God and, eventually through the leadership and bravery of Moses, were freed from bondage and brought to the Land of Israel (the North for many slaves). One example is the spiritual “Go Down Moses.”

We know that many of the spiritual songs were used as an instruction for runaway slaves to escape to the North, disguised as a biblical story. The spiritual “Go Down Moses” clearly has a hidden transcript. According to Harriet Tubman “Go Down Moses” was one of two code songs that fugitive slaves used to communicate when fleeing Maryland as they traversed on the Underground Railroad. Another spiritual “Didn’t My Load Deliver Daniel” draws its inspiration and lyrics also from the Jewish tradition.

He deliver’d Daniel from the lion’s den,
Jonah from the belly of the whale,
And the Hebrew children from the fiery furnace
And why not a every man.
I set my foot on the Gospel ship
And the ship it began to sail,
It landed me over on Canaan’s shore
And I’ll never come back any more.

Spirituals were some of the first music by African-Americans to eventually be published and recognized by the “white” American establishment. Ensembles such as the Fisk University Jubilee Singers popularized spirituals by performing them on tour and recording them, leading to more groups doing the same and helping bring these songs into the mainstream. The Fisk Jubilee Singers was a group of African-American singers established, in 1871, at Fisk University in Nashville, Tennessee. They were named after the Old Testament reference in which all slaves were set to be free during the Jubilee year. The text comes from Leviticus 25:8-13: “It shall be a jubilee to you, and each of you shall return to his own property, and each of you shall return to his family.” In 1873, the Fisk Jubilee Singers embarked on a tour of Europe, and, while in Great Britain, they performed before Queen Victoria and Prime Minister William Gladstone. Various versions of the ensemble continue to perform today. The group was inducted into the Gospel Music Hall of Fame in 2000. Along with spirituals, shouts also emerged during the slaves’ Sunday worship. Shouts begin slowly with the shuffling of feet and clapping of hands. This then led often to ecstatic dances that had some slaves rolling on the floor in a trance that allowed them to temporarily leave the confines of their toil. As we celebrate Black History month this February, think about how the Old Testament helped heal and gave hope to millions of slaves in America, and how their musical heritage became the antecedents of so much of our popular music today.

On March 26th at SDSU in Smith Recital Hall, you can enjoy my ballet composition based upon the text of “The Song of Songs” and danced by the San Diego Ballet. The concert begins at 7pm and is free. www.jewishstudies.sdsu.edu

Robyn Hitchcock: Sticking It to the Humble Prawn on Planet England