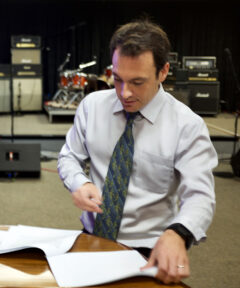 About Brian Witkin
Brian Witkin runs a boutique entertainment law firm in San Diego. He is also a musician, producer, and CEO of Pacific Records. Brian has spent nearly two decades in the record business and is a Grammy® voting member of the Recording Academy. Brian’s father, Joe Witkin, was the original keyboard player of Sha Na Na, who performed at the iconic Woodstock Festival in 1969.
Note: This article is for general informational purposes only and does not establish an attorney-client relationship. The information is deemed reliable but not guaranteed. Every situation is different, and the general information contained in this article may not apply to your specific situation. The author and publisher assume no responsibility for actions taken based upon the contents of this article. Seek the advice of counsel for your specific situation.
©Law Offices of Brian A. Witkin 2022.

The Role of a Music Producer