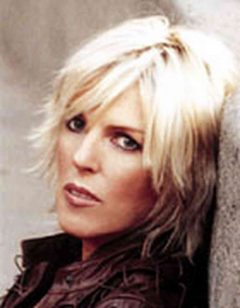 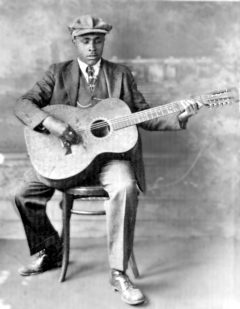 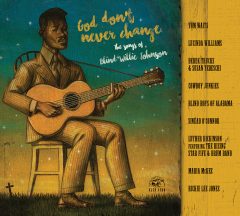 At first glance singer-songwriter Lucinda Williams and legendary country-gospel blues singer Blind Willie Johnson have little in common. But, there is more that ties these two artists together than meets the eye.

The works of both artists have gained the attention of today’s music industry with Grammy nominations and awards. Lucinda Williams has won three Grammys along with a multitude of nominations for her series of critically acclaimed albums.

For Williams, her new album, The Ghosts of Highway 20, has more to do with the blues than it does with gravel roads and passionate kisses. While this is not a departure for her, this album digs deep into the blues–perhaps deeper than ever before.

Blind Willie Johnson, gone for nearly 71 years, is honored for the first time this year with a Grammy nomination for Best Gospel-Roots album for the tribute album God Don’t Never Change: The Songs of Blind Willie Johnson. The album includes song interpretations by Tom Waits, the Cowboy Junkies, Rickie Lee Jones, Luther Dickson, the Blind Boys of Alabama, and none other than Lucinda Williams.

If Lucinda Williams draws deeply from the well of blues, then she has quenched her thirst with the gospel soul music of Blind Willie Johnson and his contemporaries. Her albums–Where the Spirit Meets the Bone from 2015 and 2016’s The Ghosts of Highway 20–have found her increasingly moving toward blues as her writing has descended deep into the heart of our best American songwriting. She has hit universal themes as she exposes the blood and bones of her lyrical songs infused with country-blues. And so much of her work on Ghosts flows out from a trance-like love for blues. It seeps through her sound like a restless spirit begging for release.

If there is a homage to the ghostly spirit inside of the soul of country-blues present in Williams’ music these days, then Blind Willie Johnson embodies it. It feels like no coincidence that the year she released this album Williams shows up with two unforgettable performances of Blind Willie Johnson songs on God Don’t Never Change.

A tribute album for Blind Willie Johnson is long overdue. He has influenced generations of guitarists and songwriters since the beginning of the rock era of the 1950s. With his rough-as-gravel voice and dynamic slide guitar, he made his way faithfully through the racism of his day with songs that were full of conviction, passion, and as achingly beautiful as they were haunting. He was an ordained Baptist preacher and street singer who brought his religious-gospel-blues song to saloons as well as all white Baptist churches in Beaumont, Texas from 1930 until 1945. There are only a few photographs of him, usually in posed position with his guitar. Legend has it that he played bottleneck slide guitar with a knife.

Blind Willie was blinded by his step-mother when he was a small child. She threw lye in his eyes in retaliation for the physical abuse his father inflicted on her when he found she was cheating on him. He later learned music from street musicians and found his religion in the local black Baptist church. He was a constant presence in Beaumont. He shared his music everywhere he went–for white and black churches alike. Although his voice was a natural tenor, he sang in a trademark bass, rough sounding voice in order to be heard above the noise of the streets where he performed.

In 1945, his house burned down. He was homeless. No one stepped forward to give him a place to stay. He lived in the ruins of his burned-out home. During the winter, sleeping in the west ashes, he caught a lung disease. The hospital in Beaumont refused to treat him because he was black and blind. He died the following autumn of 1945. He was 48.
Blind Willie Johnson’s music would go on to influence artists like Eric Clapton, the Rolling Stones, and Stevie Ray Vaughn. He is widely recognized both for his songwriting and his bottleneck slide guitar playing.

He was an innovator, a great soul with a kind heart and he died because of the evil of racism.

The link between Lucinda Williams is clear on The Ghosts of Highway 20 and God Don’t Never Change. The tribute album opens with a raucous busker-worthy reading of “The Soul of a Man” by Tom Waits. Then, it is Williams who tackles the title song. The song “God Don’t Never Change” is not far from Lucinda Williams’ own song “Doors of Heaven,” from Ghosts of Highway 20, with an added existential twist as she sings: “Open up the doors of heaven let me in/I think I’m finally tired of livin’/let me in.” Musically, the song could pass for a Blind Willie composition. “If My Love Could Kill” opens the corridors to the living grief that is Alzheimer’s Disease. Her father, renowned poet Miller Williams, died from complications of the disease in 2015.

The concluding song, the powerful “Faith and Grace,” continues the kinship with Blind Willie Johnson. Just as Blind Willie, in his day, addressed the people’s guilt and fear through his stirring gospel songs, the final song on Williams’ album hits at the heart of modern angst as she reaches out and delves deep within for answers. Ultimately, all that she finds is “faith and grace.” The song would make Blind Willie Johnson proud as Williams affirms the presence of God as the final hope of life. It is a deeply soulful song that never preaches but speaks to the heart of our deepest doubts and affirms life even while a haunting bass line and glorious lead guitar takes us on a journey that ends with faith. Musically, the song is among her best. It is a welcome and uncynical look at the hope inherent within faith, even as her voice is world-weary in the finest tradition of country-blues.

The faith, clearly embraced on this album, is another way in which Lucinda Williams finds kinship with Blind Willie Johnson. He was a deeply spiritual man, who suffered as he reached his hands toward heaven and put his entire being into the songs he wrote and sang for anyone who would listen. At times, he would stand out of saloons with a tin cup tied around his neck so he could collect money without stopping his songs. Classics like “Dark Was the Night, Cold Was the Ground” and “Trouble Soon Be Over” present the same hope found inherent in Lucinda Williams’ new album.

Lucinda Williams’ life couldn’t have been more different than the impoverished Baptist preacher from Beaumont, Texas. She began in music early and started writing songs when she was a small child. But, during a 35-year career she has created a legacy of intimate, universal songs that have fundamentally done the most important job of a blues singer-songwriter–exposing and expressing where the pain resides and finding creative joy along the way. Her songs ring with fully realized blues. The result is such beauty that it’s easy to see why Time magazine once called her the best songwriter in America.

While the kinship of these two artists is not intentional, there is a universal bond in the sound of Lucinda Williams and Blind Willie Johnson that is undeniable. Even through decades and the passing of ages, it is clear these two artists shine together like diamonds in the darkness of night.

Lucinda Williams will be at the Belly Up for two concerts on January 15th and 16th, 8pm. 143 S. Cedros Ave., Solana Beach