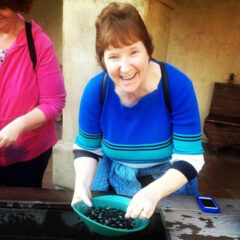 Anyone in the San Diego music scene from 2013 to 2019 most likely met Traci Smith in one capacity or another. Why do we talk rawk? Because we can! The talk show host of Gurlz Talk Rawk, Traci lived her dreams by creating her brainchild… a television interview talk show featuring songwriters and musicians and what makes them tick. It’s Where the Musician’s Creativity Finds Its Voice. Her show delved into the creative world of the musician’s voice in the local community, how they stay relevant, live their dreams, and get ahead in the industry.
Traci’s biggest joy was connecting musicians with each other, while giving them a stage and opportunities to promote themselves and share their craft. While shooting video and photographs and booking well-paying gigs for musicians, she developed a brand and creative style of graphics for her own unique social media marketing company. Traci was a can-do kind of gal—headstrong, stubborn, passionate, and unstoppable about all things music—and she had seemingly limitless energy and passion to pour into her well-earned self-made success. Her signature call-out when she achieved yet another milestone was BOOM! And this is the story of her final BOOM! 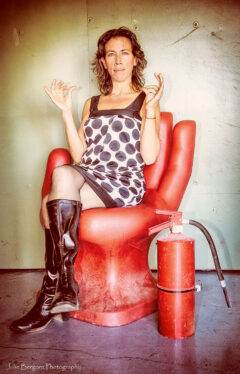 I met Traci in 2013 in the middle of the night. I was having trouble sleeping, navigating a divorce. Somehow, we messaged each other that night and I knew we would be friends forever! When most people were sleeping, Traci’s brilliant mind was churning at high octane. She was preparing to embark on a wonderful adventure and insisted on taking me with her for the ride, along with her husband Lee (Ralph) Smith, a talented and seasoned bass player who performed in several original bands. Traci and Ralph, as she called him, would drive all the way from Rancho Bernardo to El Cajon to take me galivanting all around the county, seeing four to five bands a night.
Whenever she could, Traci booked gigs for me. She knew I was a single mother doing my best to support my family. I’ll never forget how much of herself she gave to me at a time when I felt an immense void. Traci was always a force to be reckoned with and somehow this force was able to bring me back to life! I needed help promoting myself, and Traci was becoming an expert at it, introducing me to countless musicians and performers, networking on my behalf, leading to amazing opportunities for writing, recording, singing, performing, and creating music I had only dreamt possible. 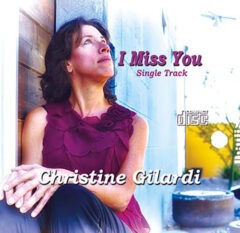 In May 2014, I was invited to perform at the Women’s Journey Conference at UC Irvine. After my performance, two women asked me if I would perform at a benefit they would be hosting that summer. Not knowing the focus of the event, I agreed to perform and offered to write an original song. The next morning publicist Shelly Harrison contacted me to let me know that Tanya Brown was hosting a Mental Health and Wellness Summer Summit to honor the passing of her sister Nicole Brown Simpson. The event honored the 20th anniversary of her sister’s untimely death. I took a deep breath and prayed and started writing “I Miss You.”
Grammy Award-winning guitarist and producer Larry Mitchell and I had met the prior year. I took a chance and asked for his input on my arrangement, which he generously provided, and the song was ready. To make the trip more relaxing, Traci drove me to the event in Costa Mesa. She recorded the song, which was very well received. I sent the recording with my thanks to Larry, whose reply shocked me. He asked me to record tracks to send to him for production. Working with Larry Mitchell was a dream come true to say the least! Larry worked his magic on the tracks later that year and completed the song. It was over and above my wildest expectations! The craftsmanship of Larry Mitchell added so much power to the song’s propensity to emotionally move people, touch their hearts, and bring them healing for their grief. The “I Miss You” song inspires a deeper connection with loved ones and instills the resulting peace that comes from that experience.
With Larry Mitchell’s encouragement, I entered the song in the 2015 New Mexico Music Awards. It placed as one of the top five in the vocal performance category! Traci was so excited to hear this news that she booked us an all-expenses paid trip to Albuquerque. This would be an epic adventure! Traci, a passionate photographer, took photos and videos all weekend. Whenever I listen to “I Miss You,” my thoughts go to Traci. This song is about a sister’s love and the universal connection we all share with loved ones that defies the barriers between Heaven and Earth. It illustrates the mystical tie between us that is inseparable by space and time. The song also brings home the reality that life is short. It’s a reminder to celebrate everyone in our lives while we still can. Traci sure did!
Fast forward to Christmas dinner, 2019, at my brother’s home in New Hampshire: a call came in from Traci and I stepped away to take it. What I assumed to be a Merry Christmas greeting was in fact news of a cancer diagnosis she received the day before. Naturally I was very concerned for her, yet I felt so honored by her call on Christmas Day to let me know. I was so happy I took the call, which normally I would not have, at a holiday dinner with family.
In January 2021, Traci reached out to me to let me know the cancer was spreading and she was accepting the inevitable. On Friday, February 26, she texted me with a compelling request: I would like to hire you to write a song. We already have all the words and my sister wants me to get it put down with a melody and all the rest. This was the beginning of the final BOOM! 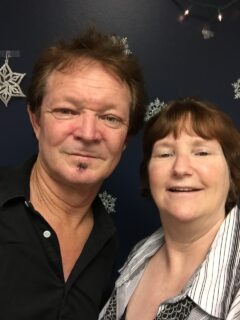 Traci with her husband, Lee. 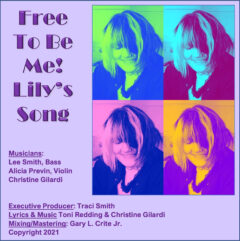 In 2019, Traci’s sister Toni had written lyrics for a song for their niece, Lily. Toni’s lyrics sat dormant for over a year, until February of 2021, when Traci’s other sister Tricia (Lily’s mom) shared them with Traci. At the age of four, Lily had a massive seizure, which led to the discovery of a rare condition that she was born with: Chiari 1 Malformation. Most people with this condition go untreated and undiagnosed, suffering from depression, anxiety, and other mood disorders. In 2016, at age eight, Lily had a surgery called Decompression with Duraplasty, which opened the brain and made space for fluid to flow freely. After the surgery Lily’s recovery was long and difficult, taking an enormous toll on her, causing rage and violent, self-harmful behaviors. Lily is now 14 years old and is happy, grateful, and hopeful about her future.
Traci’s number one priority was to leave a legacy to honor Lily and her successes, for Lily to remember how strong and powerful she is and to help others facing similarly difficult challenges. As I began writing the music on Sunday morning, February 28, I printed out the lyrics and sat down with my guitar. Songs can take weeks, months, or even years to write, but in this special case, within just 10 minutes, “Free to Be Me” made its own voice known. It was as if the music was in the quantum field waiting to flow through me.
I called Traci in Indiana to play it for her on the phone from San Diego.  Afterward, she texted me saying, “Amazing, girl, love you so much! And I only hire the best! Remember that!” I thought my mission was complete. Around this time, Traci’s caretakers estimated only three days of life remained. I was filled with a strange mix of satisfaction and grief. I didn’t want to interrupt the family’s time together and was resigned that any conversation could possibly be our last.
Little did we know, Traci was just getting started. She kicked into overdrive, texting her choice of performers to contact. She sprang to life in a way I can only describe as EPIC! She wanted this song for her niece, for her legacy, and for the world. As soon as I recorded the rough-cut lead vocals in garage band, a second harmony vocal part came. Traci wanted me to include San Diego treasures Laurie Beebe Lewis and Chuck Lewis, however the timing didn’t work out. 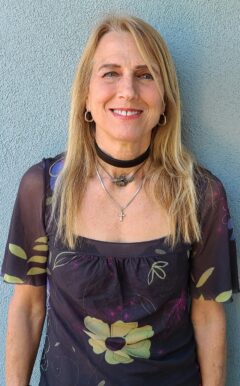 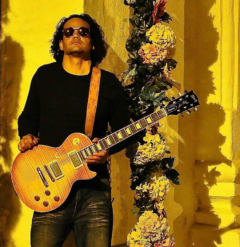 I sent the rough track to Alicia Previn, who was Traci’s pick for violin. Alicia said that her parts for the song flowed like they did for me. “I was saddened and surprised when I heard about dear Traci. When asked to play on this song, I was delighted to be a part of such a sweet tribute. When I was told I would be featured so I could play whatever moved me, I got right to work and found that the parts came easily. Sometimes I am in awe of how God assists like that.” I asked Alicia how many takes it took for her before this beautiful final version. She replied, “One take for everything except the solo. The first pass had some good ideas. The second was too busy. On the third pass I felt the Spirit lead me where to go and I was happy.”
Traci’s husband Lee (Ralph) is an accomplished bass player and, of course, he was her pick for bass. Lee shares how the process was for him: “Tracy has always been my biggest fan. It was an amazing process that was natural and easy. When Christy first sent me her thoughts and the acoustic guitar and violin parts, the bass lines fell into place—simple, but part of the whole.” Amazingly, the project was done remotely—remarkably, we were never all together in person.
I secretly began asking for photos from the family so I could surprise Traci with a music video containing photos of Lily and Traci and their family. On March 7, I joined a family Zoom call and played the video I made for the ”Free to Be Me” song. I thought we could record final tracks, but by March 15, had realized there was no time for more recording. We needed an engineer, so Lee recommended a friend of theirs, Gary L. Crite Jr., who generously agreed to mix the scratch tracks. By March 18, Gary had masterminded the final version.
That day Lee messaged, “I just let Traci listen to the song and she loved it! She actually asked me to send it to her phone so she could listen to it when she wanted and I had her phone sitting beside her in bed.” Traci would listen to the song whenever she wanted for another month. She was so strong and stubborn that she amazed all of the hospice nurses and held on to life until April 16. She finally let go with her family surrounding her. I was lucky enough to be on that Zoom call with her family that day, and I can’t adequately express all the emotions going on inside me. What an amazing six-week journey we all had together… and Traci made it fun, exciting, fulfilling, and nothing short of… EPIC! BOOM!

Hart Acres: A Seed Sprouts in the Desert