THE MELON SEED, A PARABLE 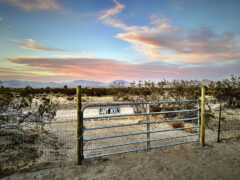 The beauty of the Mojavi. Photo by Cathryn Beeks.

Years ago, a man named Hartley and his wife, Carol, took hold of a plot of land in the desert. They studied and worked hard and created an oasis, where hardy plants could thrive and provide some shade and shelter for the living things under them. Later, their daughter made her home on the edge of that oasis, and her friends began arriving to enjoy the shade there.
One day, in early summer, during the second year of the pandemic, a gathering of friends shared a meal there, and numerous melon seeds fell to the ground. The people and animals ignored the seeds, and they settled into the dust. The days were long, hot, and dry, and many seeds shriveled and were unable to sprout.
However, later that summer, the daughter noticed a tiny melon plant had begun to grow. No one knew if that seed carried in more life force than the others, or if it had by chance fallen into a spot where it alone was protected from footsteps and the sun’s rays, and could collect the nightly dew.  Now the daughter has placed rocks around it and gives it attention each day, and it thrives, though still only a tiny plant and a season away from bearing abundant fruit.
The oasis is in Lucerne Valley. The daughter is Cathryn Beeks. The seedling is Hart Acres.
THE HART OF THE MOJAVE 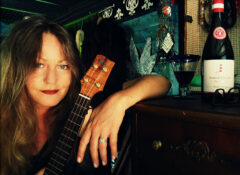 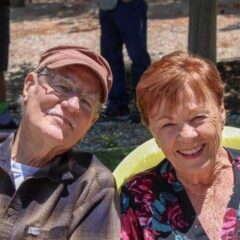 The heart of Hart Acres, where people gather. It’s magic at night.

Hart Acres is the newest destination for San Diego musicians wanting to expand their horizons. A couple years back, Cathryn Beeks and her husband, Jon Edwards, answered a family call up into the high desert of the Mojave. It took a lot to achieve escape velocity, breaking out of the orbit of Cathryn’s ongoing musical events and Jon’s live music support career. First envisioned as temporary, it became the solid base for their next launch: Hart Acres. To date, they’ve installed a manufactured home, renovated their old home into a guest house, constructed a first-rate camp toilet and—of course—made a miniature golf course. They hosted their first guests this spring and had their first major campouts in June. Fall season will see activities ramping up. It’s a ramping camp!
The Oasis
I can’t argue with Cathryn’s knack for branding. (Heck, her band is CalAmity! Her films are made under the ½Fast logo, whose pun only occurred to me as I wrote this article. (Genius often goes unappreciated by the masses!) However, I would have tried hard to work “oasis” into the name somewhere. My visit centered around the Lounge, under a leafy tree canopy, with a cooling breeze filtering through. In hotter weather, there are misters. Rustic art abounds.
You can stroll around the grounds and feel like you’re in a combination of park, hippie commune, and living outdoor museum. Desert flora thrives, including Joshua Trees on the property. Artistic flourishes are everywhere, mostly of the homemade variety (my favorite kind). Black aeoniums grow in a rusted Edwards brand coffee can from the last century. You’ll notice an alien-desert spirit-dinosaur, welded from random machine parts plus an almost-complete outdoor pizza oven, which probably won’t get much use until the heat breaks.
The amenities blend well with the nature; sandy paths lead from the mini-golf to the Casita (“little house” en español) past the nicest campground bathroom I’ve ever seen (thanks, Jonny!) and water tower (add your name to the growing “I was here” inscriptions) on around to a bocce/horseshoe court turnoff, and, finally, the Lounge area. The property is not so large that any of those are a hike, but is laid out in such a way that each one has a private area separate from the others.
Look south from the property and you face the San Bernadino mountains at 10k-plus feet of elevation. Look north and scan the bowl of Lucerne Valley, ringed by distant rocky hills. The sun does its expected twilight maneuvers to the east and west. The heavens do their dance above, unimpeded by city lights. Cathryn’s CalAmity bandmate Nisha Catron, who knows of what she speaks, says, “It’s amazing walking around the property at night, looking at the stars. Sunrises and sunsets are dreamy.” 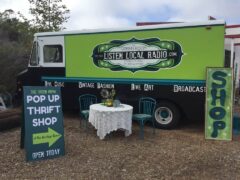 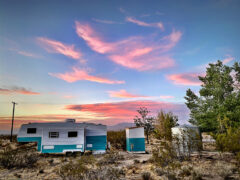 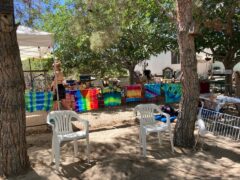 Chicks enjoying camaraderie in the Lounge. 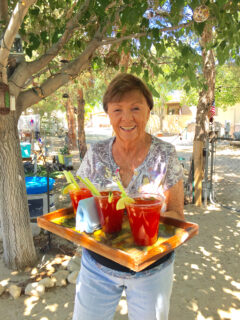 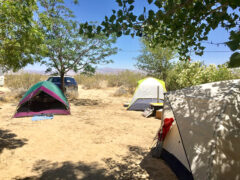 Plenty of room for tent camping. 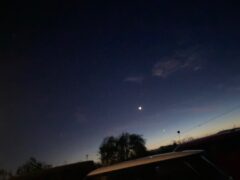 As the sun goes down, Jon points out several brightly lighted properties scattered across the distant terrain, and identifies them as cannabis grow lots. I make a joke about not being able to identify the meth labs until they explode. No one thought that was funny; I was just trying to show that you don’t have to be a genius to be unappreciated.
WHATCHA GONNA DO?
Here are some excuses to visit Hart Acres, or things to do once you get there.

Judy Collins: On a Never-Ending Road of Music and Healing