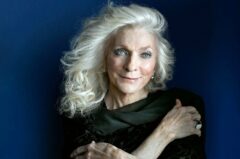 Judy Collins, radiant in her 80s.

It seems there are so many roads that diverge and come together in life as the road unfolds. It’s a matter of choosing which path to walk down and what fate holds. It is especially so for the very gifted artisans and icons.
Once, after a sold-out concert in Denver, Colorado, internationally famous folk singer-songwriter Judy Collins was greeted by her piano teacher, Antonia Brico, a renowned veteran classical musician and conductor. When Judy was 13, she made her musical debut as one of Ms. Brico’s students, performing Mozart’s Concerto for Two Pianos. She showed such great promise, the veteran musician thought of grooming young Judy for great things in the world of classical music. However, Ms. Collins soon became passionate about the roots of American folk music and the guitar. Her teacher did not approve. So, many years later, after Judy Collins became an icon in American popular music culture, the student and teacher reunited after her concert, Antonia took Judy’s hands in hers, gazed at her fingers, and said, “Little Judy, you really could have gone places.”
Later, in the early 1970s, the two would reunite again as Collins co-directed an Oscar-nominated documentary about her teacher titled Antonia: A Portrait of a Woman.
The term, “National Treasure” is one that has been used to describe many legendary artists throughout the years. It has also often been carelessly and questionably applied. But no one deserves this title more richly than Judy Collins. This is not only for the decades of shining folk music she imparted to us. It’s about how she has lived and loved and how she continues to carry on with grace and a sense of renewal and joy. Generous is the most descriptive word that crosses my mind after reviewing her career, so far. She has generously shared her vocal artistry and invited other artists to join her in the creation of great American music. 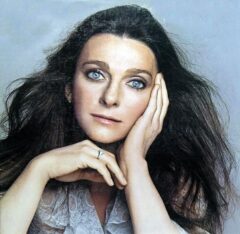 For the past 60 years, Judy Collins has held true to her musical visions through exploration of the roots of folk music, breaking it loose from traditional restrictions and allowing other musical forms into her field of creative endeavors. Through it all she has flown over genre-boundaries with ease from the traditional folk ballads of her debut 1961 album, Maid of Constant Sorrow, through the country-tinged Ian Tyson rodeo classic song, “Someday Soon,” on her best-selling Who Knows Where the Time Goes album, to her hit version of Stephen Sondheim’s “Send in the Clown.” She has shared the gift of her interpretative skills that cover the American musical landscape with compassion and a rare artfulness over our life and times. Like no other artist she truly is in a class of her own. She is a graceful participant in painting the portrait of great American music.
During a recent reacquaintance and overview of her musical legacy, it’s the purity and beauty of her voice, so natural and effortless, that strikes down to the core of this listener. There is a welcome-home quality to her voice as I review her songs, new and old. She is not only a national treasure, she is also our collective national muse, reminding us today to keep seeking the best in our spirits and everyday lives.
To be sure, the journey has not been an easy one for Judy Collins, who, now in her early 80s continues to tour, record, and hold-forth with a bi-monthly podcast, Since You Asked. She has written several books about her musical journey and stories of addiction recovery. With years lost in the destructive traps of depression and alcoholism and the devastating loss of her only son, it is her voice that carries her healing love of a life in music as it gracefully moved through her that is most remarkable. If her voice has been a vehicle of sorts, her life story has demonstrated the healing that is in everyone’s reach by way of an open heart.

While Collins has made several breakthroughs as an artist during her career, her most significant occurred in 1975 with the release of the album, Judith. The project was released after a one-year hiatus from recording and touring while she co-directed the Oscar-nominated Antonia: The Portrait of a Woman, about her friend, mentor, and piano teacher, Antonia Brica.
The album was her first to extend her song pilgrimage into contemporary Broadway musical theater with “Send in the Clowns,” from the hit 1973 musical A Little Night Music. While the album continued to showcase great songwriters like Danny O’Keefe, Wendy Waldman, and Steve Goodman, it also ventured into rock with Jagger and Richards and modern theater with Stephen Sondheim’s “Send in the Clowns,” which resulted in a Grammy win for the songwriter.
If we follow the trail of this rare and uncommonly talented singer-songwriter’s musical legacy a portrait of an artist emerges who has been intensely aware of the best songwriters of our times. Many of them, like Leonard Cohen, Randy Newman, Eric Andersen, Joni Mitchell, and Sandy Denny before they were well known. In 1967, Collins scored a hit with young Joni Mitchell’s “Both Sides Now.” Almost a decade later, she would do the same with her hauntingly beautiful rendition of Stephen Sondheim’s “Send in the Clowns.” Her now-classic recording of Ian Tyson’s “Someday Soon” gracefully brought folk music together with country music. The sonic result still elicits chills with musicians in the mix like Buddy Emmons on pedal steel, Stephen Stills on bass, James Burton on guitar, Jim Gordon on drums, and Van Dyke Parks on keyboards.
Lately she has continued to take the road less traveled with generous collaborations. The first of two such 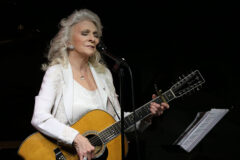 Judy Collins performs at Cafe Carlyle in New York, May 3, 2015. The singer’s opening night performance the venue was full bodied as she presented works by Stephen Sondheim and others. (Michelle V. Agins/The New York Times)

significant collaborations was in 2016 when she recorded and toured with independent singer-songwriter Ari Hest. As they performed shows together, they found a musical kinship that seemed to demand work together. The result was 2016’s Silver Skies Blue with original songs co-written by Collins and Hest. The album is a folk-rock delight with harmony-driven vocals, a wonderful combination of acoustic and electric instrumentation, and overall a crisp, organic production. It was well-received by critics and nominated for a Grammy for Best Folk Album. It has come to be regarded as a career highlight for Judy Collins.
Another important collaboration occurred in 2017 when she came together with former amour, Stephen Stills, who famously wrote the CS&N classic, “Suite: Judy Blue Eyes” about her. Their subsequent album, simply titled Stills & Collins, and tour showed how two old friends and lovers can come together, not so much in spite of their history, but because of it, with great love and affection. The result was a collection of songs and performances that resonate with the joy of love, friendship, and seasoned artistry that sings with the soul of both musicians.
Most recently, Collins has recently released one more collaborative album, Winter Stories, with Norwegian singer-songwriter Jonas Fjeld and American bluegrass band, Chatham County Line. It has been universally well-received and was #1 on Billboard’s bluegrass charts upon release, giving Ms. Collins her first-ever #1 spot on American charts. It is, indeed, a beautifully realized collection of songs from a collective of artists who blend together some truly magical inspirations. As Collins said in a recent interview, “I knew that Jonas and Chatham County Line would be a great fit with me. The language of music overarches everything, including geography. When we came together in the studio, we found we could speak to each other in a way that was compatible and nuanced. “She concluded that she “was very honored to work with this all-star group” as “there was definitely a lot of love and admiration amonst everyone, and we had such a great time together”
As Judy Collins brings her musical journey to Humphrey’s by the Sea this month (September 17), it is a chance to see one of America’s great musical legends, still in near peak form, once again. Her road continues to call her forward, to share her gifts with us as she has been doing for 60 years. With still more musical callings ahead of her and the generations who listen, it is good to know she is there with a song to sing and in her voice and through her songs, healing to share.

Hart Acres: A Seed Sprouts in the Desert