January 2023
Vol. 22, No. 4
Nanci Griffith: Appreciation for an Americana Music Pioneer by Terry RolandSeptember 2021
Back with a Bang! Java Joe's Reunion at San Diego Folk Heritage by J.T. MoringSeptember 2021
Book Review: The Philosophy of Modern Song by Bob Dylan by Ted BurkeSeptember 2021
Rick Nash: Bass Man in Demand by Wayne RikerSeptember 2021
If Music Be the Food of Love, Play On: Dually Noted Pairs Fine Food and Fine Music by Paul HomiczSeptember 2021
Mod Revivalists the Trebels to Reunite for 40th Anniversary Show by Jim TrageserSeptember 2021
Harold in the Land of Jazz by Bart MendozaSeptember 2021
Sephardic Dance and Music by Yale StromSeptember 2021
Loretta Lynn: A Special Tribute to the Queen of Honky Tonk by Terry Paul RolandSeptember 2021
Ben Grace Gilmore: It's All About Building Community by Sandé LollisSeptember 2021
Advertisements 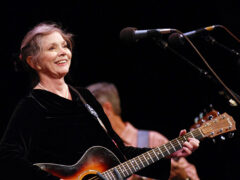 Griffith in 2010. Photo by Brian Blauser.

The first time I heard Nanci Griffith was in the midst of what Steve Earle called The Great Credibility Threat of the ’80s, when radio still reigned and the commercial country world embraced Earle, Lyle Lovett, the Desert Rose Band, Emmylou Harris, K.d Lang, Rodney Crowell, Sweethearts of the Rodeo, Rosanne Cash, and so many others. As radio and record labels discovered the lucrative arena-rock approach to country music shows, these vital artists were left without labels, promotors, or a place for their music to be heard.
But it was through this abandonment of real country music that Americana music was born. Today, the movement has been growing steadily for over 25 years. The movement has included a marriage of folk and country music paired with skilled songwriting. Today it has produced such fine artists as Jason Isbell, Valerie June, Gillian Welch, Dave Rawlings, Drive-by-Truckers, Rhiannon Giddens, and Brandi Carlile.
In the early 1980s, singer-songwriter, Nanci Griffith, who died on August 13th, was one of the leaders of the pack. That’s because it was her way of bringing together what—to others—may have seemed like contradictions. She was a Texas singer-songwriter, surrounded by a conservative culture, who proudly wore her progressive political credentials. She held to a love for her Texas-born music roots, which included folk music. She had a love for the social justice she was taught through her Catholic upbringing. She was a one-of-a-kind singer-songwriter with a voice as sweet as a Texas bluebonnet sunrise and a boundless love for the heartland of American music. The poetic imagination that ignited so many of her finest songs conveyed the artistry inherent, but too often undiscovered, in the borderline between folk and country music. Songs like “Gulf Coast Highway,” “There’s a Light Beyond These Woods(Mary Margaret),” and “Love at the Five & Dime,” eschewed the usual cliches of country music in favor of a fresh exploration of the real humanity behind the songs.
Her classic albums from the 1980s, Little Love Affairs, Lone Star State of Mind, and Last of the True Believers, show an artist at the height of her creative powers forging a path for a new American music genre and for future artists to walk.
It was her 1993 release, the Grammy-winning Other Voices, Other Rooms that helped spark the fire that began the Americana music movement. It honored the best American folk music of the past through a country music lens. Today, the album is a cornerstone of the genre. Today’s aspiring Americana artists should absorb, internalize, and emulate the album.
The loss of Nanci Griffith at this transitional time for Americana music is a reminder to keep to our roots and to embrace her legacy of songs and stories as a gateway and guide to what is best in our musical traditions. But, Nanci Griffith is still among us. Her music will stay with us and she will still live through her influence in a way that will not allow us to hide her in history. She is among the best illustrations of the life and light beyond the woods of heartbreak we feel when an artist like this passes away. Maybe, in a very real way, her words from “Gulf Coast Highway,” ring the truest. And when she dies she says she’ll catch some blackbird’s wing….
And she will fly away to heaven
Come some sweet blue bonnet spring