January 2023
Vol. 22, No. 4
Ode to Louis Brazier September 2021
Back with a Bang! Java Joe's Reunion at San Diego Folk Heritage by J.T. MoringSeptember 2021
Book Review: The Philosophy of Modern Song by Bob Dylan by Ted BurkeSeptember 2021
Rick Nash: Bass Man in Demand by Wayne RikerSeptember 2021
Mod Revivalists the Trebels to Reunite for 40th Anniversary Show by Jim TrageserSeptember 2021
If Music Be the Food of Love, Play On: Dually Noted Pairs Fine Food and Fine Music by Paul HomiczSeptember 2021
Harold in the Land of Jazz by Bart MendozaSeptember 2021
Sephardic Dance and Music by Yale StromSeptember 2021
Loretta Lynn: A Special Tribute to the Queen of Honky Tonk by Terry Paul RolandSeptember 2021
Ben Grace Gilmore: It's All About Building Community by Sandé LollisSeptember 2021
Advertisements 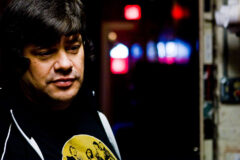 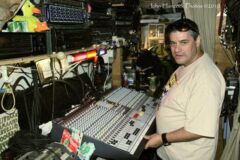 Lou at the mixing board. Photo by John Hancock. 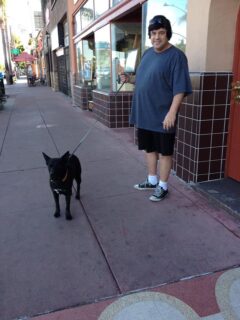 Lou and his beloved dog. 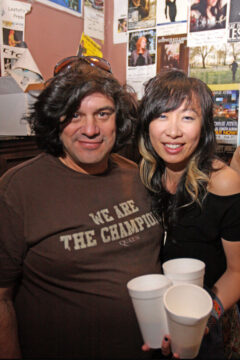 Louie Brazier died unexpectedly last month at the age of 59. A mainstay in the music community and longtime sound engineer and booking manager at Lestat’s coffeehouse, Lou was loved by all for his friendly, selfless, and helpful demeanor. He was a friend and counselor to all. Here is a collection of loving tributes to his memory. He loving tributes to his memory. He will sorely be missed. RIP Lou. xo

FROM STEVE POLTZ
RIP Louis Brazier
AKA Louis Lestat’s
Welcome to death week.
Jeez. The hits just keep on coming.
Louis was the man. He did it all. He was the real name behind Lestat’s West.
He passed away yesterday.
He’s the guy who would book the gig. He’d follow up when you’d need to advance the gig a few days before the gig took place. That’s what we call it. “Did you advance the gig?” That means the gig was already booked, but now you’re checking in with all your sound needs and set times and backstage info and parking info.
Louis was the dude who did it all.
Look, we write songs, we practice those songs. We record them. Then we need a place to play. Hopefully a place where there aren’t a bunch of TVs on blaring some game in the background. A cool room with great sound and a well lit stage and good monitors and a nice backstage area. Lestat’s was that place.
Louis ran the joint. He knew every inch of that venue. The backstage room had old posters taped up covering every open area. There was a dilapidated couch and some chairs and a place to set your drink. Guitar cases everywhere. Old capos and picks under the cushions. Stories. Lots of stories.
Louis made it happen. He’d welcome you and make sure you were able to park. Not only would he run sound but he’d also run the lights. And—he was a great photographer, too. He’d always record your show. In fact, it was sort of unnerving because right when you finished your set he’d start playing the show that you just played. Warts and all!
If you wanted to be introduced, he’d make that happen. He made you feel WELCOME. Like you were home. And you WERE home when you played Lestat’s. It was home field advantage. Your name would be up in lights on the marquee. On a really busy street! Lots of cars, bikes, and foot traffic. A lot of eyeballs would see your name up in lights.
If you were able to fill those seats, you’d make a bit of dough too. He was very generous with the percentages. He’d have his black dog with him and he’d always greet me with a warm hug. If his black dog passed away, he’d get a new black dog. He loved his dogs. He’d be doing a million things at once like a mad scientist. He’d soundcheck you and make sure you had a coffee and show you some old photos from the last time you were there and he’d give you a CD of the show you played a few months earlier.
He had a cool open mic night scene. It went on for years. Lots of folks got their start there. When you stood on that stage you FELT important. Like you had a shot at the title. If you looked to your right while standing on stage you’d see a bronze sign that said “Gregory Page Stage.” I loved that.

Louis created a scene. If you saw friends you might say “Hey I talked with Louis and he gave me a Thursday night in May. Do you wanna sit in with me?” You might not even mention Lestat’s. Just the fact that you said Louis, everyone would know. When you finished your gig you basically had a new press kit if you wanted it. Perhaps a good recording of a funny moment that happened on stage when magic appears out of thin air. Lou was there to capture it. You’d leave with new photos and videos and recordings. One stop shopping!
This is the third death this week of really special people in the San Diego community: Dennis Caplinger, Matt Hoyt, and now Louis Brazier.
Hey death, take a chill pill. Will you? I mean, I know we all gotta go but let’s just all take a deep breath and say I love you while we’re still able. Okay? Me first. I love you.
Rest In Peace Louis Brazier. BaHOOTenzie! Many blessings; let’s go nuts. You were a true champion and a bright light. You’ll be missed. You definitely made a mark. You cared. You made us feel special and loved. We were lucky to know you.

FROM JEFF BERKLEY
Once in a while there’s a champion. Someone who spends their time fighting for the well being of others and putting their own needs aside to create something beautiful. That’s Louis Brazier. A stunningly talented and gifted sound man and tour manager. Louis kept Lestat’s music venue in San Diego going. He kept the doors open and worked tirelessly to create the kind of environment it takes to make live, magical, musical moments. Louis allowed those moments to happen by fostering an environment of magic and safety for musicians and audience members alike. What a talent and soul. I’ll miss you old friend. You were a champion, a gladiator, a hero. You fought for San Diego musicians with love and light and won!

FROM JIMMIE LUNSFORD
Louis Brazier left us recently, and that hole will not be filled. But Lou’s legacy is community, celebration, music and life. All of that and more will carry hearts too heavy to move, too hurting to feel. What Lou gave us when he was with us was more than we deserve. And so it is with what he left us.
I’ve said several times over the years, at the mic, on the stage, with Lou present, that the greatest thing I have ever done in my life was to host Lestats West Open Mic, San Diego, CA. Lou gave that honor to me. And here, when I look into his eyes, I’m there. In that community, in that place of celebration and music, that space of life. Thank you, Lou. This one’s for you, Lou.