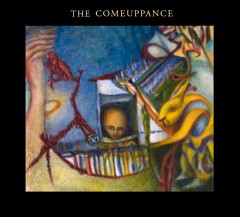 I’m a sucker for the sound of a cello. Always have been. Traditionally a fixture of classical music, the cello found its way forever more into the realm of contemporary rock and pop ever since the Beatles popularized the aesthetic by employing a string quartet on tracks like “Yesterday” and “Eleanor Rigby.” Brian Wilson used cellos on many a Beach Boys track and by the mid-’60s scores of pop groups were creating a going-for-baroque sound as exemplified by groups like the Zombies, the Left Banke, and the Moody Blues. Remarkably versatile, whether as a melodic instrument or as a tonal device, the cello just can’t be beat.

But more than loving the cello I’m also a keen appreciator of inventive wordplay and melodies that surprise you with serpentine twists and unexpected resolutions and that is justification enough to recommend checking out the eponymous debut CD of San Diego’s The Comeuppance. The husband and wife duo of guitarist/vocalist David Fleminger and cellist Heather Vorwerck have crafted a unique gem of an album that beautifully evokes a singular soundscape and sustains it brilliantly throughout its ten tracks. Three of album’s songs are instrumentals, allowing for Vorwerck to take the lead lines (“Mutual” at the top, “Ragamuffin” in the middle, and “Good ‘Ol Boy” as the finale). Additionally, the other seven tunes containing lyrics ups the ante considerably by adding a sense of poetic mystery. Rarely literal, the protagonist in these songs reports upon some oblique truths that end up sounding like an enigma wrapped in a riddle. These songs refuse to be pinned down and that’s precisely what I like about ‘em.

One listening evokes a particular set of responses — listen again and another mood emerges, without so much as a flicker of bombast, where subtlety reigns supreme. “Impossible Dream” is a non-linear showcase of how the symbology of the astral plane resists pigeon-holing and is all the more effective because of it. In “Ten Notes” music is the message as well as offering the metaphoric means of overcoming any self-created obstacle (such as forgetting how to breathe) and a reminder of how we all need “some hope in times of pure neglect.” The sweep of Vorwerck’s sawing across the plaintiveness of Fleminger’s vocals draws me in deeper still and by the time “Fell Song” arrives I’m reminded somewhat of the 1968 masterpiece Forever Changes by Love as well as the texture and sound of The Juliet Letters by Elvis Costello and the Brodsky Quartet. Conversely, however, I’m finding very little that’s derivative in these songs. “Nebulous” is perfectly titled as both a signpost to this territory of cyclical change (“seasons come and go — we grow”) that rolls (roils?) within a multitude of emotional expressions (“her moon’s tide washes me through”).

In addition to songwriting duties the multi-talented Fleminger also created the striking oil painting of the CDs cover art (entitled “There Are No Mistakes,” it brings to mind the ‘ole maxim that God Does Not Play Dice with the Universe). Well… The Comeuppance appear to be rolling sevens and have created a beautiful piece of ear candy for folks who still value intelligence with texture in modern music and you are encouraged to take in their set on the weekend of April 27th and 28th when they perform at the Adams Avenue Unplugged Festival. As for me I can’t wait to hear what they come up with next. TouchÃ©.