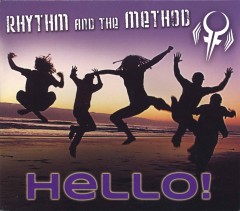 Start with a straight-up guitar blues band, then add more exotic ingredients: an aggressive female lead singer with plenty of sociopolitical attitude and the pipes to support it, guitar riffs that are alternately evocative and flashy, and toss in elements drawn both from early Led Zeppelin and Heart’s semi-acoustic tracks and the power-chord anthems. Finally, make the result a family project, and here comes the sound of local rockers Rhythm and the Method. On Hello!, singer/drummer/guitarist Rhythm Turner, her brother Evan (lead guitar), dad Papa Shawn (rhythm guitar), and bassist Laura Payne crank out ten songs that cover a lot of ground and are often ear-catching.
The first track is by dad and Evan, “4th Dimension,” a funk/guitar stomper that would be right at home on a disc by Eric Gales or another Hendrix descendent, with a half-rapped vocal by Rhythm that defiantly affirms non-conformism as a world view. She is a vocal powerhouse, and “My Little Red Book” continues the hard rock groove, as heavy guitars and her raucous vocal transform a Burt Bacharach standard into an ass-shaking LGBT anthem, and a standout track.

“Twisted” turns down the volume, as the first of the eight Rhythm originals is an introspective examination of her insecurities and confusion after the loss of her partner; the mid-tempo arrangement uses nice fuzz guitar echo effects and buildups to support her powerful voice. More of the same for “Indigo Children,” but with a political edge — Rhythm tells the aristocracy to “Come down from your high rise” and witness the new revolution; it’s time for the new generation to “stop waiting around for someone to come down and set us free.”

An almost mellow, jazzy blues tune, “Evan’s Song” shows another, sensitive side to both Rhythm and the band as a whole, a touching poem to her brother. The disc has a definite ’70s vibe in many spots, perhaps nowhere more so than on “All Over”; it’s catchy and could pass for an outtake from Led Zeppelin III. Back to the blues, with no pretense of anything fancier on “Rhythm Blues,” the band (with harp help here and elsewhere by Nick “Chowda” Walsh) gets down and pounds out a walking 12-bar. Rhythm tears into the vocal, but doesn’t try to be the next Janis, and bro Evan gets to show his oats and lays down clean lines without overplaying; sometimes simple music like this is the easiest to mess up; they don’t. “Wrong Game” is a power rocker with big chords, quicksilver lead breaks, and more political lyrics, “Now the only thing that sets you apart from all the rest/ Is the fact that you can’t get your act together/ I think it’s time you looked at yourself.” Rhythm is an interesting lyricist with plenty of points to make about society, but no printed lyrics could be found — repeated plays help the messages sink in.

Hello! rocks, but isn’t noise; Rhythm and the Method have stepped forward with an album that at times inspires and surprises.