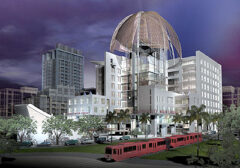 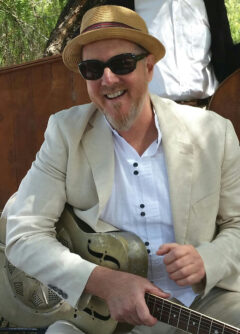 The Central Library Concert Series is the longest continuously running free concert series in San Diego! Formerly called the Central Library Chamber Music Series, this Concert Series began around the time of the “new” Central Library’s opening (meaning the old 820 E St. location) in the 1950s. Librarian William Vere Wolf created this series of live chamber music concerts soon after he was hired in 1955 as a librarian in the newly formed art, music, and recreation section of that Central Library.
Librarians Laurie Bailey and Pete Miesner continue in Vere’s footsteps and currently co-chair the Concert Committee, with a supportive group of volunteer community members who help identify new ensembles in the area. The committee also reviews submissions by soloists and ensembles who contact the library about participating in the Central Library Concert Series and help plan a balanced season.
The Series is primarily a program for classical music performances, but has also featured local jazz ensembles, choirs, family-friendly concert events, and partnership programs with other local music organizations such as San Diego Opera and The Center for World Music.
WHO ARE SOME OF YOUR STAND-OUTS/FAVORITES FROM RECENT SEASONS?
Laurie: As a colleague once said when asked a similar question…this is a bit like trying to pick your favorite child. The well-known local ensemble from SDSU, the Hausmann Quartet, is just exceptional, and they are always a pleasure to work with, both during Concert Series performances and for our separate SDSU Community Concerts series. I am always pleased to host Trio Céleste, out of Orange County. This trio always selects a varied and exciting program, featuring classical to contemporary composers, and their performances are masterful. I’ve also greatly enjoyed performances by violinist Annelle Gregory. She is incredibly talented. We’ve hosted stand-out performances by Gilbert Castellanos, Gustavo Romero, and, honestly, too many other talented musicians to list here.
Pete: I am always transported when listening to the Hausmann Quartet. They will masterfully delve into traditional pieces but will also delight with modern works as well. We were fortunate to have them open our recent season (a performance which is also available on our YouTube channel). One performance I very much enjoyed in recent years, which veered away from our more classical fare, was Joe Garrison and Night People. Ostensibly a jazz group, this ever-changing ensemble is very experimental and unique. I had only a vague idea of what Garrison’s group was about and was pleasantly surprised by a very moving performance.
TELL US ABOUT THE WONDERFUL SERIES’ CONCERT PIANO THAT’S CAREFULLY STORED ON SITE

Beatific and Blissful, This Harpist Is Heaven Sent!