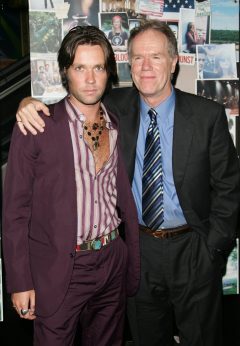 Rufus Wainwright has been called one of the great male vocalists, songwriters, and composers of his generation. Indeed, it is noteworthy how the 45-year-old Canadian-American excels at each artistic endeavor. Wainwright returns to the Belly Up Tavern in Solana Beach on Sunday, June 9, for a performance that promises to be a night of superlatives and maybe a little bit weird.

First and foremost, Wainwright is one of the finest singers of popular music that the genre has known. He has a voice like few others, something music writers and critics seem quite willing to gloss over in their attempts to concentrate on the extravagances of some of his performances or the details of his personal life.

The baritone has a range that stretches into the upper register that tenors often strain to achieve. Not an opera singer himself, opera has influenced his approach to singing. There is the support and power he gives each note. Where a great deal of pop performers will cut off a tone or reduce a phrase or simply imply the singing of a note, Wainwright sings. He sings each and every note.

Wainwright has collaborated with Joni Mitchell, Elton John, David Byrne, Sting, Ben Folds, and other pop performers. Since 1998, at the age of 25, Wainwright has released nine studio recordings as well as several live and compilation albums. His premier release, simply titled Rufus Wainwright, was met by positive reviews. His sophomore effort, titled Poses, was more personal in nature and, as one might surmise from the song “Cigarettes and Chocolate” examined one’s relationship with desire. Wainwright has said that Poses was a conscious effort to mix up the sound of one of his recordings after the lavishness and baroque quality of Rufus Wainwright. “My first album,” he told David Brusie of the Boston Globe in November of last year, “was a kind of repository of my coming of age, and the songs took years to ferment. Poses was somewhat more conceptual. I knew right off the bat that Poses had to be structured in a way that was pretty solid. It’s really the sophomore effort that’s most important. The first one you really get a hall pass, but the second has to be above and beyond.”

Always stretching the limits of art and music. Wainwright’s latest release is Take All My Loves, in which he creates a contextual interpretation of nine of Shakespeare’s 154 sonnets. Among the featured guests are Helen Bonham Carter, Fiora Cutler, and Wainwright’s sister, Martha Wainwright. TJ Hooker fans will be pleased to know that fellow Canadian and the man who turned the spoken word interpretation of pop tunes into an art form, William Shatner is included on the roster of talent for this effort. Released in April of last year by Deutsche Gramophon (Yes, the album cover features a huge yellow banner.) the recording commemorates the 400th anniversary of William Shakespeare’s death.

That willingness to take things a step further led Wainwright, in 2006, to perform two shows at New York’s Carnegie Hall, which were exact recreations—word for word, song for song—of a 1961 concert that Judy Garland had performed on that very same stage. Wainwright went so far as to perform at least one song in Garland’s original key, using his falsetto to match the alto of the singer and actress. Wainwright later took his Garland tribute concert to the London Palladium, Paris, and the Hollywood Bowl.

Music has been and remains the business of Wainwright’s family. Both mother and father, Kate McGarrigle and Louden Wainwright III, made their mark as folk singers way back when folk singers were as common as cafes with Wi-Fi are today. During the sixties McGarrigle and her sister, Anna, became prominent performers in Montreal’s folk scene and formed, along with Jack Nissenson and Peter Weldon, the folk group the Mountain City Four. In the seventies, an album that McGarrigle recorded with her sister, their first, was chosen by the British music news weekly Melody Maker as Best Record of the Year.

McGarrigle passed away in 2010 from sarcoma, a form of cancer. As part of his website, Wainwright supports the Kate McGarrigle Foundation, a charity founded in 2012 that supports research of and treatment for sarcoma. Every year, Wainwright and his sister Martha, as well as other musicians, produce “Noel Nights,” a series of concerts held during the holiday season in major North American cities. Besides fighting sarcoma, monies raised from the concerts also support music therapy and research.

Louden Wainwright III is the son of Louden Wainwright Jr., who was a columnist and editor for Life magazine, a print publication that was the beta version of the internet from 1936 to 1972. Throughout his career, Louden Wainwright has been known for his humor and self-revelatory songs that border on TMI. He made his acting debut in the 1970s on the hit television show M.A.S.H. in a semi-regular role as Captain Spaulding, the singing surgeon, He has appeared in television shows such as Undeclared and Parks and Recreation. Movie appearances include Knocked Up and The 40-Year-Old Virgin.

Rufus’s sister, Martha Wainwright, and half-sister, Lucy Wainwright Roche, have followed in the family footsteps of folk and popular music.

As might be expected, coming from a family of singer/songwriters, Rufus Wainwright writes many of his own songs. What is probably unexpected is that Wainwright also composes operas. Going from popular music, the tradition of Tin Pan Alley, Broadway, Bacharach, and the Beatles to the sounds of Verdi and Puccini might seem like a tough transition to make, but it works for Wainwright artistically. “I find it useful,” he told Scott Tady of The Times in January of this year. “You escape one form and hide out in another, but bring in elements you picked up on the way, elements that inform each style.”

Wainwright has been a lover of opera from the time he was a child. His father “didn’t get opera at all,” but his mother had recordings of Benjamino Gigli, the beloved successor to Caruso, and the Swedish tenor Jussi Bjoerling. Their record collection included the groundbreaking 1960 Fritz Reiner recording of Verdi’s Requiem, which included Bjoerling and Leontyne Price. “It came at a junction in my life where I was completely hit simultaneously by different things. One was that I was gay, two being that AIDS was on the scene,” he said to Anthony Tommasini of the New York Times in September 2005. The thrilling and consoling music “immediately hooked into all the emotions I was feeling.”

Wainwright recalls the typical teenage spats over the selections played on the family stereo, his mother favoring folk and pop recordings while he demanded to listen to The Elixir of Love and Simone Bocanegra. This love of opera has continued and even grown with Wainwright over the years.

In June of last year he told Vanessa Thorp in the “Observer” section of The Guardian, “I’ve often gone into the opera house in quite a state yet come out completely transfigured, so when I gear up to work in that world, it is like I am going into the clergy,”

His first opera, Prima Donna, is an opera about opera. Dramatically set in Paris on Bastille Day 1970, the story follows the ruminations and trials of a once revered operatic soprano who, after a six-year absence from opera stages, is confronting the demons that hijacked her career.

The opera had a rocky start, with Wainwright disappointed in the original production, which was in Manchester, England. Subsequent productions met with critics complaining that the opera lacked good pacing and proper dramatic tension. The music was not praised much, either.

His second opera, Hadrian, received a performance in Toronto in October of last year. More ambitious than his first, the storyline concerns the love life, at least that of the emperor’s memory and imagination. In explaining his choice of Hadrian as the subject of an opera, Wainwright says that, among other things, the second century emperor created Palestine and thus left a legacy that troubles the modern world to this day.

Wainwright has lent his name in support of a Canadian version of the Green New Deal, joining a number of prominent Canadians such as Neil Young, actors Evaneline Lilly and Cobie Smulders, as well as scientists David Suzuki and Christina Hoicka. Put together by a coalition of 67 organizations—including Indigenous Climate Action, Migrant Workers Alliance for Change, and Climate Action Network—the effort emphasizes social and economic justice as part of reducing greenhouse gas emissions.

The coalition made their announcement last month on the same day that the United Nations released a report that explains how human activity—and especially the warming of the planet caused by greenhouse gasses—may cause the extinction of up to a million plant and animal species.

Long Live the Free Reeds! Peter Stan and a Brief History of the Accordion